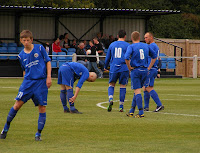 It's August Bank Holiday but only the faintest hint of blue is present in the sky for the twelve o'clock kick-off at Newton Aycliffe. The home side are a club on the up, with a Wearside League title and a ninth place finish in their first ever year in the Northern League, but it's Crook Town who have the history. Five times FA Amateur Cup Winners, they played Barcelona three times in 1913 (winning one and drawing two) at the invitation of ex-player Jack Greenwell, who played for and managed Barca, won the Copa del Rey with Español, and coached Peru to the 1939 South American Championship. 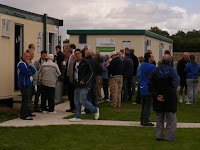 A crowd of 312 has gathered despite the early start. The long main stand, straddling the centre-line, is almost full and Crook's Black and Amber Army have strung their flags across the wooden fence separating the football and cricket pitches. The game is close, temperatures increasing both on and off the pitch as three niggling fouls in a minute earn the Aycliffe captain the first yellow card. But in an otherwise eventless first-half only the kicking of Crook's goalkeeper threatens to put his side in any kind of trouble. "Out your hands, nothing else," orders the bench, and the kick out sails into touch by the dug-outs. "You're better off along the ground, mate," comes the shout from left back. "I'm getting telt two different things here," he complains, with some justification. 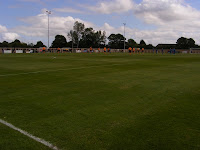 Things are just as tight in the second half. Aycliffe take an early lead and are denied a penalty for a blatant trip ("That one was (a foul)," Crook's pantomime-villain centre-half tells the crowd behind the goal) but most of the game takes place above head height. Crook have their chances but it's the home side who finally score again. A long-range shot catches the keeper off his line, sending most of the crowd home smiling and Aycliffe up to second in the league.