Dumbarton or Airdrie? Airdrie or Dumbarton? "Airdrie are playing Albion Rovers in a derby, they're near the top of the league and Hughie Gallacher used to play for them." "Yeah, but Dumbarton's ground is right underneath a big rock." Right, we'll go there." 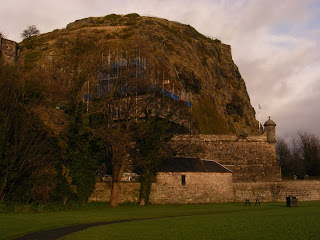 "Dumbarton is for the most part a brutal concrete sprawl, fulfilling every last hellish cliche about postwar planning and architecture" says my 2004 copy of the Rough Guide to Britain, though all that suggests is that the writer's never been to Sunderland Central Station. I kept my head towards the pavement between Dumbarton East and The Counting House pub, where haggis, neeps and tatties with a pint of Belhaven Best came to under £6, and old men nursed cans of Irn Bru through the dull first hour of Hibernian against Hearts, their eyes never leaving the screen.  Between them, the Edinburgh sides were responsible for two of the five Scottish Cup final defeats Dumbarton suffered between 1881 and 1897. Cup winners for the only time in 1883, when they saw off local rivals Vale of Leven in a replay, the club had more success in the newly-formed Scottish Football League, sharing the championship trophy with Rangers in 1891 and winning it outright the following year when they beat Celtic into second place and Rangers by an aggregate scoreline of nine goals to one. Professionalism eventually proved a more difficult opponent, Dumbarton's amateurs resigning their place in the league after a return of six points from eighteen games left them bottom of Division Two in May 1897. By the time they rejoined nine years later the club's glories had already been lost to a sepia age. In 2000, fifteen years since it hosted a top-flight game, Boghead Park, the scene of what remains the record league defeat in Rangers' history, was abandoned for housing and a new 2,025-capacity stadium built between the 17th century castle, the former site of a whisky distillery and the dormant shipyards of the River Leven. 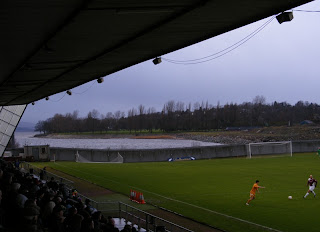 They're a friendly bunch at the Strathclyde Homes Stadium. "These two lads are up from Newcastle for the game," announces the man selling tickets for the club's half time draw. "All the way from Newcastle," he grins. "Saturday's a fitba day. If we don't have a game I'll go and watch Partick or Queens Park, but there are Celtic and Rangers fans in Dumbarton who've never even been here." "Hope you enjoy yourselves, lads. A Scottish New Year welcome," says another, shaking my hand as we queue at the bar. A programme seller sets up out of a carboard box by the fire escape, the surrounding walls adorned with flags from Division Two championships, team shirts and framed photographs featuring Graeme Sharp, Ian Wallace and Murdo MacLeod, youth team graduates who went on to Everton, Celtic, Borussia Dortmund and Brian Clough's Nottingham Forest. A team shot from 1983 includes Albert Craig, less heralded on the pitch but later to make ten appearances for Newcastle United and one at Glasgow Sheriff Court, where he admitted helping himself to £40,000 from a Royal Mail sorting office and was sentenced to twelve months in jail. 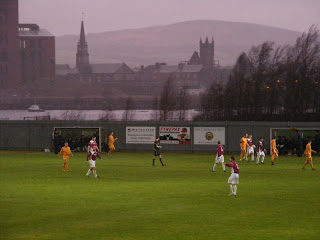 Six hundred fans turn out for Dumbarton and Arbroath's third meeting of the season, the visitors winning the previous two by four goals to three to start the year second in the table behind Cowdenbeath. "No-one likes us, we don't care," the Arbroath fans sing, using a Klaxon horn to repeatedly reinforce their point.  There isn't much else dividing the teams until the 20th minute when James Creaney's nine-iron cross finds Bryan Prunty's forehead to put Dumbarton 1-0 in front. Not that single goal deficits faze three-cap veterans of Berti Vogts' Scotland. Brian Kerr - an international midfielder during his time on the books of Newcastle and Motherwell - plays a ball from halfway, Steven Dorris outpacing Alan Lithgow before slipping the ball under Stephen Grindlay to quickly level the scores. When a misdirected header falls to Josh Falkingham's right foot the home side are 2-1 down twelve minutes after taking the lead. "Can you hear Dumbarton sing?" gloat the travelling fans. 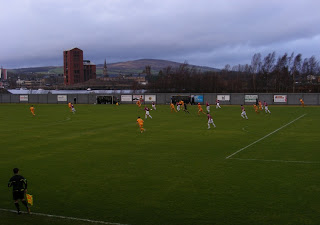 Made to chase the game on a rain-sodden pitch, the home side's wayward passing creates as many chances for the opposition as it does for themselves. Grindlay looks vulnerable whenever the ball's in the air but makes two excellent saves as Arbroath squander opportunities to put the game out of reach. There are five minutes left to play when Lithgow somehow squeezes an equalising goal through two Arbroath players and keeper Darren Hill, the ball finally deflecting in off a defender's fist.  In time added on Pat Walker - brought on as a 79th minute substitute - breaks clear, his shot rebounding into the net off Hill's left hand post. The silence is all at the far end of the stand. 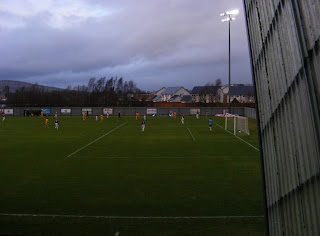 "I never thought we'd turn that around at half time," a Dumbarton fan smiles on the walk to the Stags Head pub. "Me neither," says his mate. "Fucking great way to start the year!"

You can see video highlights of the game here as well as cinefilm footage of Boghead from 1980.  If you don't like bagpipes, it's best to turn the sound down now.