I arrived in Tochigi in the autumn of 2004, swapping a university city an hour away from Prague for a railway halt on the very northernmost edge of the Greater Tokyo Area.  I lived in a shoebox-sized flat with no internet connection, a phone restricted to incoming calls only, and a single window with a view of two rice paddies, a convenience store and the road out of town.  It was a ninety-minute train ride to anything that didn't resemble a Wednesday night out in Sunderland; the surrounding prefecture couldn't even muster as much as a  J.League team to support.  The closest options, I very quickly discovered, were Kashima Antlers, Urawa Reds - respectively the country's most successful and biggest teams - and Omiya Ardija,  an insignificant second division outfit which had never before played in the Japanese top-flight.  For a Newcastle United supporter, there was only one choice. My contract done, I beat a fast retreat to the brighter lights of Northern Bohemia; the next time I saw Ardija play, they were losing in J1 and I was living twenty minutes west of Shinjuku, the busiest railway station in the world. 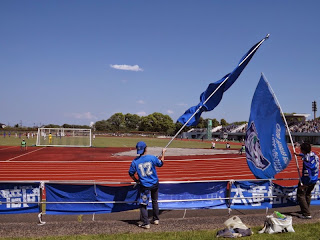 Eleven years on, I'm back in provincial Japan to see the prefecture's second team, Tochigi Uva FC.  Founded soon after WWII by workers at a local Hitachi plant, the club altered its name in 2002, was promoted to the country's highest amateur division eight years later, and is now next to last in the JFL table with a single win and nine defeats, including a 4-0 spanking its last time out.  The only side keeping Uva off the bottom is, unpromisingly enough, today's opponents, Fagiano Okayama Reserves, who have acquired just one point and a measly four goals from their opening ten matches."The quality might not be up to much," says Mike Innes, Ardija fan and long-time watcher of Japan's lower leagues, when we meet on the platform at Shin-Tochigi.  Along with Steve Barme, fellow expat Omiya supporter and our designated interpreter for the day, we navigate from station to stadium by iPad screenshot, passing a swimming pool, a petting zoo which has a pair of goats on a blue tarpaulin and a ferret in a pink cage, and a man who says "No money" as he presses three tickets into our hands. 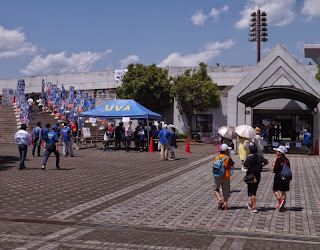 The free entry is part of Uva's off-the-field push for the J.League, resulting in a bigger than expected crowd of almost 1,300.  The ground comes in standard single-stand-with-mini-roof-and-grass-banking design, with a fountain on one side and forested hills on the other.  The seats are three-quarters full, the grass is more sparsely populated.  The Uva ultras are behind one goal, waving flags and setting up drums which they bang on incessantly.   The Fagiano four stand by a corner flag, partially hidden by a set of stairs.  "God almighty!" Mike exclaims when the first chants of "Fagiano!" blow faintly across the running track. "I thought that was an echo." "The standard's pretty terrible," says Steve - who clearly hasn't yet experienced the lower reaches of the Tokyo Soccer League -  as the ball arcs lazily overhead and the referee's whistle blows for yet another offside.  The closest we get to goalmouth action is a corner which is blown by the wind first towards and then about ten metres past the far post, missing every single player on the way.  We're busy speculating on the likelihood of a miskicked set-piece eventually breaking the deadlock when a Fagiano backpass is poked against a post and bounces tamely into the net.  "One of the shittest goals you'll ever see," says Mike, whose years of supporting Altrincham and Ardija make him something of an expert in the field. 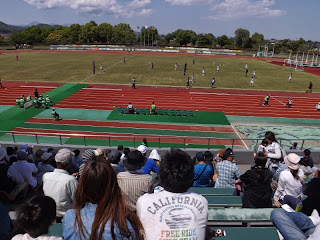 Half-time brings a queue at a vending machine, where I'm joined by an Uva fan with a megaphone, flag and Polar bear's head.  Intrigued, we follow him into back to the rest of the ultras, who break off from a group huddle to say "Hi", "Konnichi-wa" and "Welcome to Tochigi."  "The only thing that could improve this welcome," thinks Mike, "is if they give us free beer."  Instead, we make do with a rip-roaring start to the second half, the home side having a goalbound effort headed off the line before Toshihiko Uchiyama smashes in a second after his first attempt bounces back from a teammate's chest.  The Uva support keeps up a clamour of drumming, which crescendoes with the polar bear spreadeagled on the grass while screaming incoherently through his megaphone.  Another fan waves a towel scarf.  A third, in blue curly wig, shakes everybody by the hand.  "Come again next game," says one of the ultras, while a woman holds aloft a photo of her favourite player and screeches at the pitch.   A strange afternoon, but by far the most fun I've ever had in Tochigi.  "Fancy coming again?" asks Steve as we polish off mini-steaks in a restaurant which mysteriously empties almost as soon as we walk through the door.  It takes me three hours and four trains to get back to Yokohama, sunburnt, tired and ready for more. 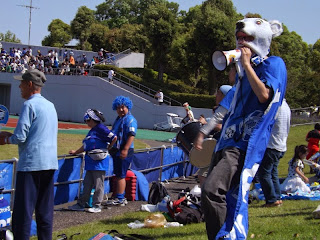 In case you're wondering, the Uva in Tochigi comes from the Italian word for grapes, though Mike's father-in-law assures him that Tochigi's grapes are actually "shit, too sweet and with no depth of flavour."  The polar bear head, disappointingly, is tied in to a sponsorship deal with an air conditioning company (with thanks on that one to Steve's superior Japanese language skills). 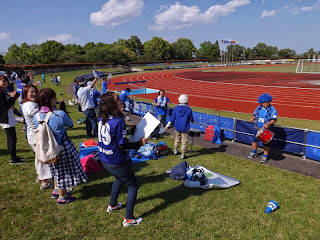