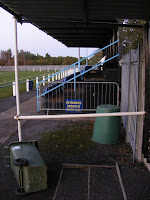 Newcastle Benfield have come a long way in a short time. From the basement of the Northern Alliance in 1988, when they were founded as Brunswick Village FC, to Northern League champions in 2009, four promotions and five changes of name later. With the demise of Newcastle Blue Star they're now the second biggest club in the city, though their average home gate barely tops a hundred people. Blogger Paul Kirkwood, visiting for an FA Cup tie against York City, thought the club's record crowd of 927 showed no more interest than "neighbours who were curious to know what the noise over the garden fence was all about".

Esh Winning, who've won one point, changed half their team and sacked their manager since I saw them six weeks ago, aren't the biggest draw in the Northern League, and tonight's game is watched by around a hundred people, including four away fans and a group I recognise from last night at Whitley Bay. "Imagine doing this in the Premier League," says one. "It'd cost you eighty quid." "It's a decent crowd," I say. "Aye, half of them are from Whitley. These don't even cheer when they score." The ground's fenced off from a school playing field, with two all-seater stands across either end of the halfway line and a long bit of terracing covered by scaffolding poles and corrugated sheeting nearer the turnstile. The club offices, tea hut and (soon to be completed) clubhouse are in building site portakabins behind a goal, where you'll also find possibly the worst pair of toilets in the whole of English football.

Esh hustle and harry but gift Benfield a goal with their first attack of the game. The keeper waits, a defender dallies, and Scott Fenwick nips between the two to turn an overhit through ball into a one-nil lead. The away side almost equalise with a scramble from a corner but it only takes two touches from John Campbell to put the game out of reach. He has a shot cleared off the line, pings the follow up against the post, scores with a free kick that leaves the crossbar humming and the keeper staring blankly into space, and passes a penalty into the net after Fenwick's quick feet suck a defender into the tackle. "Now we're playing," says player-coach Alu Bangura.

Esh are making space in midfield but don't have a forward anywhere near as clinical as Campbell and spurn two good chances before half time. Soon after the restart he shows them how it's done. His third is a controlled clip around the keeper, the fourth rolls into the net like a snooker ball across green baize, his fifth - his fifteenth goal in nine league games - is volleyed in on the turn after the keeper spikes a shot in the air. He's involved in the seventh too, his attempt on goal parried for Adam Rowntree to sidefoot over the line. Everything he does looks absolutely effortless. All Esh can do is chase after the ball.

Benfield move up to fifth, six points behind leaders Consett but with three games in hand. For Esh Winning, it's played thirteen and won none. 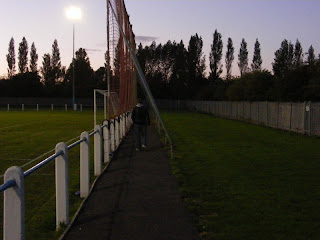