Although I’ve been using the Tyne & Wear Metro system since it first opened in 1981, I don’t think I’ve ever got off at Palmersville (a fact which might owe something to a late-night documentary I once saw on Tyne Tees in which a group of middle-aged country & western obsessives in cowboy hats and snakeskin belts travelled between Shiremoor and Monkseaton massacring songs by Willie Nelson. Believe me, you don’t risk hearing that twice). 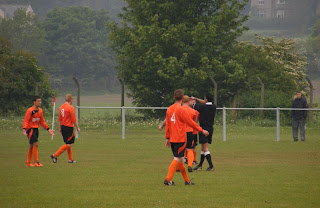 There’s no arguing against the lure of Forest Hall versus Berwick United Ultras at the bottom of the Northern Football Alliance Division One, though. At 2.30pm, as the forecast rain began tipping down, Berwick kicked off to a non-playing audience composed of me, four substitutes, two club officials who keep up a constant stream of instructions – “Stay there. Use your eyes. Hold it, hold it. That’s the ball. Why did you do that? Hold. Use your common sense.” - while running the line, and a pair of kids who wander in with an old ball and leave before half time. 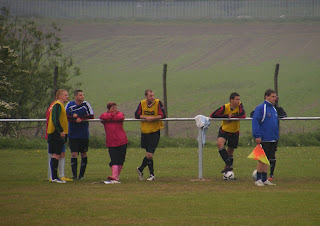 Forest Hall, founded in 1996 and now with 23 separate teams, spent four years raising a £25,000 contribution towards the brand spanking new £1.2 million East Palmersville Sports Pavilion, funded by North Tyneside Council and a Football Foundation grant of almost £500,000. The facilities are a big improvement on their old wooden clubhouse, but it’s on the pitch where the club has struggled this season, losing fourteen of their first fifteen games before six wins in their next seven moved them briefly off the bottom and three successive losses dumped them straight back. The visitors, formed in 2006 through the merger of Berwick’s two oldest amateur sides, Spittal Rovers and Highfield United, haven’t managed to pick up three points since a 7-4 romp at Stobswood Welfare on the last weekend in March, and are third bottom on 25 points, three ahead of Forest Hall and one in front of North Shields Athletic. 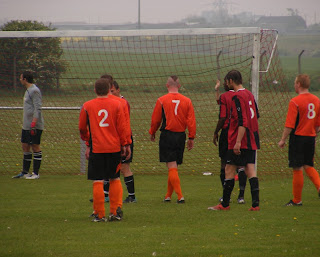 In a scrappy, error strewn start on the now slippery pitch, it takes fifteen minutes for either side to threaten a goal, Berwick’s keeper allowing the ball to dribble through his legs and having to scurry back to retrieve it from the line. With both teams equally uncompromising in their tackles, the referee is the busiest man on the pitch. A Forest Hall midfielder skips round two challenges but is felled by the third. “You dived, you cock,” the defender says. “Eh? I slipped, aye, after you hoofed us in the air.” They’re soon at it again, the Berwick defender sliding in as his opponent attempts a turn to the right. “You shouldn’t be diving in like that,” the Berwick centre-forward shouts back from halfway. “I didn’t dive in,” turning to face the Forest Hall player, “I didn’t foul you at all.”

The rain falls, Berwick shank a couple of shots wide and Forest Hall put a free kick over the bar and have a flick on chested off the line. Then, right on the stroke of half time, the twice-fouled Forest Hall midfielder picks up the ball and, without breaking stride, hits it right-footed into the bottom corner of the net. 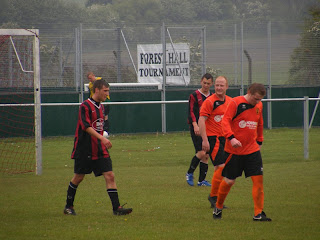 Berwick have the ball but Forest Hall the chances when play restarts after the break. A forward shoots just wide, another misses with only the keeper to beat. The Forest Hall linesman flags a couple of dubious offsides before the home team score a second, a forward latching on to a backpass and sliding the ball through the goalkeeper’s legs. Forest Hall stretch their lead, a substitute squeezing through a gap on the edge of the area and celebrating with a double somersault, before Berwick manage a shot on goal, Jamie Punton rolling the ball into the net as the entire home defence appeal for handball. “Aw ref, man. He might as well have caught it. That’s ridiculous,” the goalkeeper moans. The referee loses control, showing five yellow cards before, with arguments still raging over a disallowed Berwick goal, three goals in the last five minutes give Forest Hall a flattering 6-1 win. “Let’s just get this game ower with,” says a Berwick defender as his clearance smacks a teammate in the face and the fifth goal slides into the net. 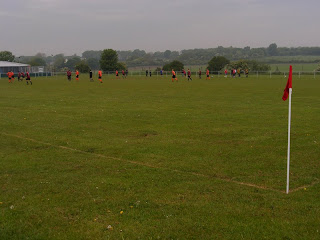 It’s a long journey home for Berwick, who slip to second bottom of the league. On Monday they play at South Shields United and have it all to do again.