The ancient city of Kyoto is home to 1.5 million people, 1,600 temples, 400 shrines, 14 UNESCO World Heritage Sites and one professional football team, Kyoto Sanga (known as Kyoto Purple Sanga until fans complained it was too much of a mouthful to chant), Emperor’s Cup winners in 2002 and the first club of Japan international midfielder Daisuke Matsui, now playing for French side Dijon. 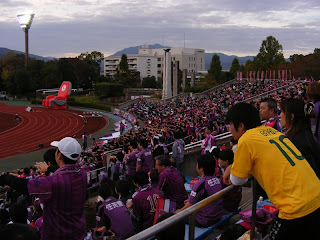 
Three more things you should know about Kyoto Sanga: they’re one of the oldest football clubs in the country, dating back to the formation of a team at Kyoto Teachers’ University in 1922, Manchester United’s Park Ji-sung played for them between the summer of 2000 and January 2003, and their ground, the 20,500 capacity Nishikyogoku Stadium, is possibly the least popular of any professional side in Japan. “Cold and sterile,” the website Rising Sun News called it, and when you enter the stadium you can see why. There’s the running track and sandpits, the three uncovered stands, and a fourth that has a square roof protruding over the executive boxes and the few hundred VIP seats immediately below.  But cold and sterile doesn’t cover what comes next: the 25-foot inflatable armchairs tied down behind each goal; the selection of slightly unkempt hedges that makes up one half of the home end; the triangular floodlights on gargantuan poles straight out of a Soviet retro design show, one anchored slap in the middle of the away fans’ section, another in the midst of a bunch of trees; the scoreboard that flashes ‘We Go! We Go!’ as the teams step onto the pitch; or the megaphone-toting supporters on raised platforms at the front of the stand who orchestrate the purple-clad ranks as they point, sing and pogo their way through most of the game. 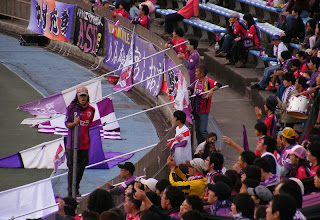 Relegated last season for the fourth time this century, Kyoto have never threatened to make an immediate return to J1, though a late season run of five wins in a row has lifted them into the top half of the table. Tokyo Verdy, former home of Ossie Ardiles (they sacked him too), Benfica’s Hulk and Bismarck (the Brazilian midfielder, not the 19th century Prussian warmonger), are still paying for a disastrous start which has left them a few places but too many points off the third promotion place.  The two or three hundred fans who’ve made the trip to the old capital are housed in the far corner, forested mountains and the setting sun behind, bouncing up and down as they switch between a St Pauli influenced 'That's the Way We Like It' and “Let’s go Verdy!” Both sets of fans seem fairly oblivious to what’s happening on the pitch, which is understandable in a first half whose infrequent highlights include a sliding block from Kyoto’s teenage defender Takayuki Fukumura as 16-goal striker Takuma Abe shapes for a point blank shot at Yuichi Mizutani’s goal, a chip from Jung Woo-young which Verdy’s Takahiro Shibasaki easily saves, and a header off the line by Mitchitaka Akimoto in Verdy’s final attack before the whistle. 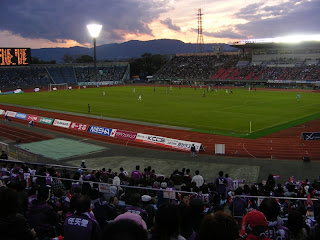 Passing up the chance to buy an £80 replica home top or a ‘Hello Kitty + Kyoto Sanga’ scarf on my way around the main stand, I switch to the opposite scoreboard end in time for the start of the second half, taking up a seat next to a Kyoto fan in a purple rain poncho and surgical face mask that’s surprisingly ben left empty. “Come on Verdy! Come on Verdy!” the away fans sing as their side win a raft of early set pieces only to find the home defence in an impressively resolute mood.  Verdy press hard in midfield, starving the home team of possession and forcing them into some last-ditch tackles, Akimoto taking substitute Hiroki Kawano out on the left of the area only for the resulting free kick to take a double deflection on its way over the bar.  Moments later, the lively Kawano plays Seiichiro Maki in but the striker slips as he gathers the ball and Mizutani easily clears. Kyoto manage to withstand the pressure and launch some brief upfield forays of their own, Ryosuke Sakai pinging a right-footed shot wide before the home fans roar for a penalty when a forward belly flops in the area. With four minutes left, the deadlock is finally broken, substitute Taisuke Nakamura latching onto a Kohei Kudo pass and shooting low and accurately into the left hand corner of the Verdy net. Most of the season-high crowd of 12,287 jump up as much in surprise as in celebration.  For fallen giants Verdy, two-time champions of Japan, it means another season of J2 football. 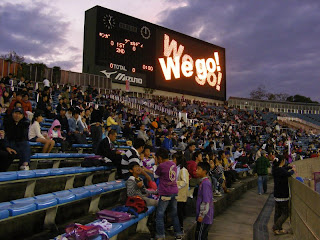 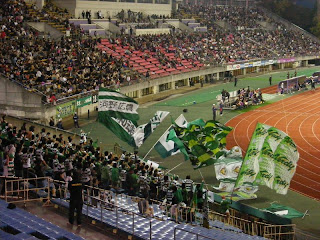 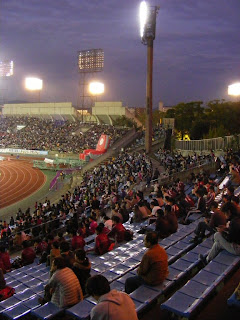 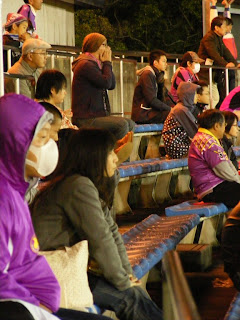