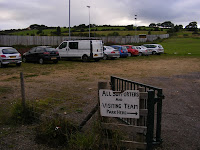 There's been a football team in Esh Winning for almost as long as there have been people living there. Settled in the 1850s to house workers for the newly-opened mine, the village's first club was formed in 1889 and lived up to their name by winning the Northern League title in 1913. 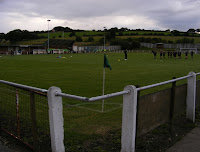 It's not something they're likely to repeat anytime soon. After a 2008 Ernest Armstrong Memorial Cup win and promotion back to Division One of the Northern League a year later, Esh finished last season just above the relegation places and went into tonight's game bottom of the table with a solitary point from their first four matches. As we arrived at the ground (memorable features: a garden fence around three sides of the pitch, trees - lots of trees, a main stand (five rows, yellow-painted wood and a metal roof lifted up to let the wind in), a social club showing Sky Sports News and two bus shelters placed strategically above a grassy bank) they were nearing the end of a fiendishly complex training drill: "Player one lays it off, player two sets it up, player three passes right, player four.." "How the hell are they gonna remember that?" the man next to me asked. They didn't. 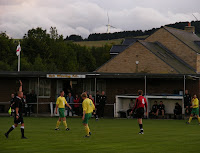 Playing down the slope, newly-promoted Stokesley looked easily the better side, taking the lead with a simple lob over the onrushing goalkeeper. "Getting murdered down the right, we are," was the verdict from behind the far goal. "Fucking murdered." The second came a minute before half-time with a sliced cross that went in via the keeper's right-hand and the middle of a post. "Down the right a-fucking-gain," came the sigh from the other end of the pitch. 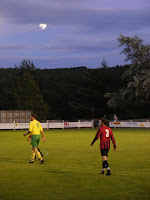 It was three points won. Stokesley stroked passes around for the remainder of the game, easily dealing with Esh's long balls out of defence. For the home side the only other action came with an injury midway through the second half. "It's a stretcher job," shouted the trainer. "Have we got one?" "There's one in the shed, I think," answered someone near the main stand. "Has anyone got a key?"