Although a thunderstorm wrecked our plans for pre-match drinks on the nearby beach, the final game of the 2009-2010 Ukrainian Druha Liga season was played out in tops-off temperatures and glorious early evening sunshine. It was a clash of old and new: Bastion Illichivsk, the home side, were an amateur team until 2008, while their opponents Mykolaiv are the country's oldest club, having turned professional in 1920. At kick off Illichivsk were in second place, Mykolaiv third. "If Illichivsk draw they will play-off with the first placed team," a Ukrainian confidently told us just before kick off. "Mykolaiv must win." 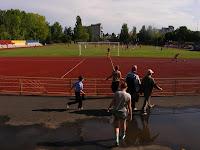 Home to Ukraine's most profitable port, Illichivsk's stadium was built by the local council when the club turned professional. There are uncovered stands down both sides of the pitch, a main building that looks like a cricket clubhouse and a capacity of around 1,200. Mykolaiv had brought a gang of ten teenagers with them, whose list of songs included the classics "The referee's gay" and "The referee's been bribed." Less predictable was the ditty about "the nationalist heroes of Ukraine," which followed a two-minute discussion about whether they should be chanting Mykolaiv (the Ukrainian spelling) or Nikolaiv (the Russian one). The M eventually won. The Bastion Ultras were slightly more numerous, managed some impressive black and red flag waving, and looked as if they were probably old enough to legally buy alcohol. Everyone else in the crowd was happy just to stay awake through a first half that boasted the same level of application and talent as a British Eurovision Song Contest entry. It certainly didn't look as if there was anything riding on the result. "These two play at the same level as we do, yeah?" asked the Norwich fan from work. "We'd beat them about eight-nil." 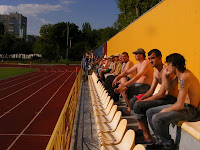 The second half was a lot better. Illichivsk took the lead, but Mykolaiv hit back with a tap-in after the home goalkeeper comically spilled the ball and then went ahead with a bullet header from the edge of the box. The whole team celebrated by the corner flag and their fans started throwing till rolls on the pitch. It seemed our informant might have been right about the importance of the game - until an Illichivsk player tumbled in the box four minutes into injury time and the referee pointed to the spot. The Mykolaiv fans turned their backs on the pitch, one of their players threw a punch, the ball beat the keeper, and the referee blew the full-time whistle before the net had even stopped rippling. Not that anybody was bothered: the players shook hands, the Mykolaiv fans clapped their team off the pitch and the seven hundred or so Illichivsk supporters filed quietly away.

In the end neither team finished second. Nyva Vynnytsia won 3-1 away at Bila Tserkva and pipped Illichivsk on a goal difference of three. 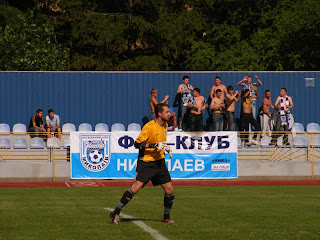 Mykolaiv's away support debate whether to clap in Ukrainian or Russian. 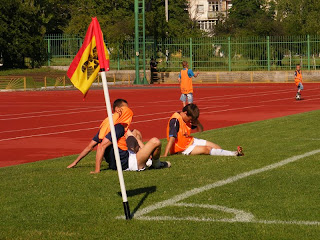 The substitutes try to cool down. 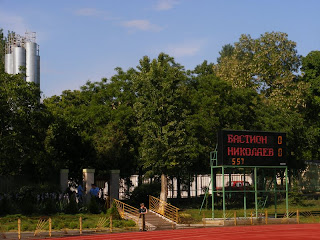 The police count their bottles of confiscated alcohol. 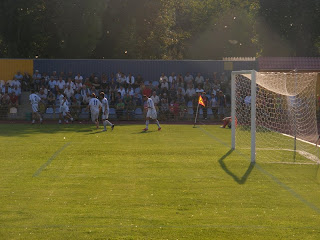 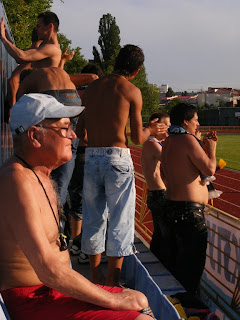 Their fans do too. Meanwhile, the old man to the right begins to regret his choice of seat.