The weekend call-offs came one after another, with the awful, hope-sapping regularity of Conservative gains on election night. Ashington, Tow Law, Chester-le-Street, Esh Winning. The afternoon pitch inspection at Sunderland RCA took just long enough for the referee to spot the five inches of snow that was piled on top of the ground. Gilford Park's long awaited first 'home' game of the season was postponed at 8am, with fifty Newton Aycliffe fans about to set off by bus for Gretna. West Auckland were still officially hopeful - "there's an inch of snow on the field but underneath it is soft and playable" - until another four came down during the night. Hebburn Town and North Shields dug out their long-sleeved shirts and made it as far as half past ten - by which time the Wearside League's fixtures page had gone as blank as Nick Clegg's conscience and the Northern Football Alliance was down to its last five games. 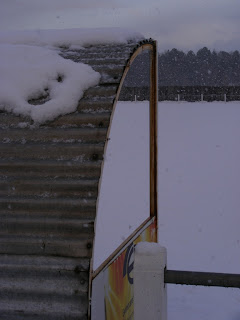 Boldon CA, Friday afternoon. Chances of play "looking a bit slim".
The sun was out at Villa Park. But at one o'clock, as Marouane Chamakh sliced a shot wide of goal, Cullercoats Custom Planet finally bowed to the inevitable.
Posted by Michael at 12:47 1 comment:

Places I Have Been: Suwon's Big Bird

In 2002, after a full year in Daejeon and seven months of purgatory on the north-eastern edge of Seoul, I moved to Ansan, an industrial town near the west coast of Gyeonggi Province that was at the time best known for having one of the capital's largest concentrations of massage parlours-cum-brothels. Probably explains why it was twinned with Las Vegas. 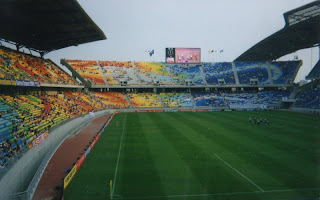 As the crow flies, my closest K-League team was Suwon Samsung Bluewings. Unfortunately, I was reliant on Seoul Subway Lines 1 and 4, which took considerably longer to cover the same distance. Bankrolled by electronics giant Samsung, in footballing terms Suwon - twice K-League winners, holders of the AFC Champions League, and with World Cup semi-finalist Lee Woon-jae keeping goal - were the real deal. As a Newcastle United fan, I was never going to feel at home. 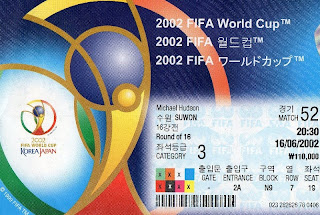 I went to the Suwon Big Bird Stadium three times: to see the host nation's 1-0 win over Australia in the 2001 Confederations Cup, Spain knock out Ireland on penalties in the World Cup's round of 16  and, just once, to see the Bluewings themselves. Always one of South Korea's best supported teams - their Grand Bleu fan club claims to have 30,000 members - they almost managed to fill all 43,000 multi-coloured seats in the immediate post-World Cup euphoria, which was slightly more than the crowd I'd been part of when they played at the Suwon Civil Stadium earlier in the year.

A few weeks later I travelled eight hours by bus to see Daejeon lose a grim game at Ulsan Hyundai. I always did feel better around utter dross.
Posted by Michael at 10:19 No comments:

For the second Saturday running, my chances of seeing a live game of football were thwarted by the weather. I'd feared as much since five in the morning, when I was woken by the sound of rain pattering against the windowpane and gurgling noisily out of the drainpipe below. Although it had eased to nothing more than drizzle (in Newcastle terms, that is) by half twelve, a second downpour as I left the platform at Walkergate got so heavy I risked public humiliation by putting an umbrella up halfway (things would have been worse back in Jarrow, where a relative once refused to stand near me in a pub because I'd been wearing a scarf - in the middle of December).

The game had just been called off. The goalnets were still pegged up and the team names - East End and Newcastle University Firsts - chalked on a board outside the pavilion door. The only sporting event actually taking place, though, was a rugby training session on the far side of the field which, out of sheer desperation, I watched for all of ninety seconds. Starting back for the Metro, I passed two chip shops, a plastic tube and fittings plant and several of the kind of puddles an Olympic steeplechase runner might expect to encounter after clearing a hurdle. Umbrellas, unfortunately, don't do much to cover your feet.

Next week, weather permitting, I'll stick with the ten-minute walk to Boldon C.A.
Posted by Michael at 16:12 2 comments:

After a twenty-minute walk from a Metro station and several wrong turns around a housing estate, I eventually managed to track down the entrance to the Bohemian Ground, home of (breathe in) Gosforth Bohemian Garnett Amateur Sports Club (and out) exactly one minute after the appointed two o'clock kick off time. There was a padlock on the gate, a bit of mud around the pitch and not a single sign that a football match was taking place anywhere (the fact that no-one could be heard screaming the words 'squeeze' or 'lino' should have already, if I'm honest, given the game away). Not even a goalpost.

A dog cocked its leg over the sign for the sports ground, and a man across the road eyed me suspiciously as he trundled a mower around his postage-stamp lawn. I shrugged, went back home and sat through Newcastle's goalless draw with Fulham on a live internet stream that required more of my attention than the game did itself. "Not enough width," I sneezed after five minutes. Nothing had changed after ninety.
Posted by Michael at 08:51 No comments: 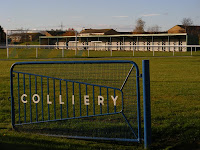 I won't bore you with the history of South Shields United - mainly because they don't have one. Founded and managed by Gareth Allen (described in Ian Cusack's Village Voice as "Humpty Dumpty with Tourette's"), they were promoted out of the Northern Alliance league's bottom division in only their second season, and ended last year as Durham FA Minor Cup winners and beaten finalists in the Dave Foster Cup. Heady days indeed.

After moving between council and community centre pitches, United have settled at the Harton & Westoe Miners' Welfare ground, which they share with Simonside FC. An 8-2 win over Peterlee Town in their last home game has attracted a crowd of nine, with an extra three on the balcony during breaks in the bingo. At Level 12 of the National League System, this is the lowest level of football I've seen since England played Algeria.

Hampered by the pitch, Shields play a modified version of what FC United of Manchester manager Karl Marginson calls 90-90 football: 90% of their play comes down the left of midfield and 90% of their passes go out for a throw in. Heddon, more famous for starting the 2001 Foot and Mouth outbreak, have a penalty appeal turned down ("Blatant," admits Allen) before the home side take the lead. A crossfield pass is cut back into the centre where a diving header smacks the ball beyond the keeper. "What a good goal, what a good goal," purrs the man in the Heddon manager's coat who's standing on my right.

He's not so happy with the second. A shot hits the base of the post, the rebound is hacked off the line, and the ball goes in at the third attempt. "It was offside in the second line or whatever you call it," he says to his mate. "Yer watch too much telly ye, man." 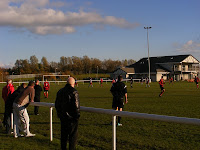 "Two-nil's a horrible score," consoles the Heddon manager in his half-time team talk. "They won't know whether to go for it or to sit back. The next goal's massive." The players listen silently - then concede a third with the first attack of the half. A free-kick is nodded down and Heddon's keeper hits the ground like an imploding smokestack, only to find the ball's already crossed the line. "Dear me, lino, that was never a free kick," says one Heddon supporter. "Are you from South Shields?" asks another.

Heddon score from a corner, Shields hit the bar with only the keeper to beat, the sun drops below the starter homes behind the far goal. "They're trying to play impossible balls," says the Heddon fan as a last-minute through ball goes out for a goalkick.

Places I Have Been: Daejeon Citizen 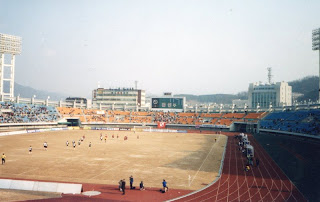 The Hanbat Stadium. Do the shake and vac.
The first time I saw Daejeon Citizen they lost 2-0 to Busan in front of a four-figure crowd on a city-owned sandpit. "Bit crap this, isn't it?" said the Darlington fan I'd gone with as the Daejeon defence launched an aimless ball in what looked to be the general direction of the corner flag. We were given scarves and interviewed for the programme midway through the second half. Foreign fans of provincial K-League teams were unsurprisingly thin on the ground.

The club had been founded under the catchy slogan "Along With Citizens With New and Fun Soccer!" but there wasn't very much that was new or fun about losing every week. Eight of the league's other nine teams were bankrolled by a chaebol, the powerful family-run conglomerates that still dominate the Korean economy. The ninth, Seongnam Ilwha Chunma, were funded by Sun Myung Moon, revered by his followers as the second coming of Christ. Daejeon, two years old and with only a local construction company behind them, never stood a chance, finishing the season with six wins and eighteen defeats from their twenty-eight games. 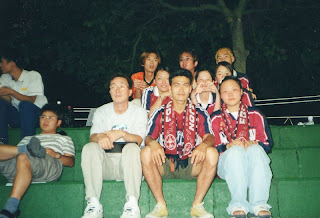 The Purple Crew
A lot can change in two and a half years. By the time I left Korea an out-of-shape Dalian Atkinson had come and (thankfully) gone. Kim Eun-jung, the club's star forward, went blind in one eye and scored the only goal of the 2001 Korean FA Cup Final. Choi Eun-sung had made Guus Hiddink's 23-man World Cup squad in the vital role of third choice keeper, and Daejeon were now half-filling the Purple Arena, the 40,000-capacity stadium where Italy had lost to an Ahn Jung-hwan header (or the referee, if you were Italian).

That season they played twenty-seven and won just one. 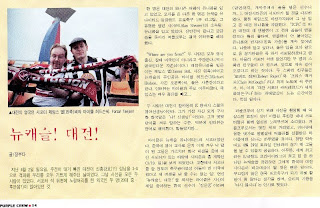