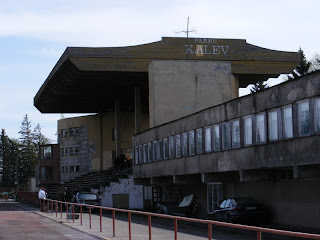 The crowd had built up to four or five dozen by the time I got to Kalevi Stadium. What passed for a ticket office was at the back of the single stand, one man with a purse and a table. He spoke no English so I handed over fifty crowns and waited for some change that never came. It's clearly an expensive division, the Estonian Esiliiga.

At kick-off the home team, Parnu JK Vaprus, were in third place, having won four, drawn two and lost three of their first nine games. Their opponents Valga FC Warrior, who represent a city on the Estonian-Latvian border but play all of their home games in Tallinn, were two places and two points behind. From the outset it was clear that Valga were by far the better team, with two pacy wingers stretching the cumbersome home defence. They took the lead after ten minutes, doubled it thirty seconds after the restart, then sat back and let Parnu hoof the ball aimlessly towards their corner flags, much to the disgust of the home support (though the two away fans seemed fairly happy about it all). 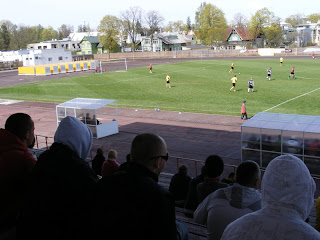 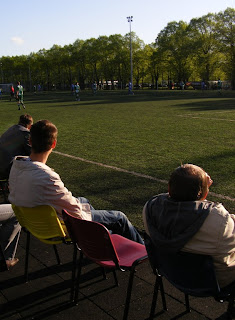 I only realised FS Metta and Valmiera were playing ten minutes before kick-off, and by the time I reached the stadium the visitors were one-nil up. There was an electronic scoreboard tacked to the fence on the far side of the pitch and the hundred or so spectators were all down one side, squinting into the sun from folding plastic seats. Directly across the road, Riga's Russian-speakers were commemorating the end of World War Two at the Victory Monument, the music almost but not quite drowning out the ten-year-old kid in front of me who insisted on banging on a drum and chanting "No! No! No!" whenever Valmiera attacked. Thankfully, that wasn't often.

Hoof it, hack it, head it seemed to be the limit of both teams' ability. What little skill there was came from Metta's left-winger, who looked like an 18-year-old Chris Waddle but had the pace of an 80-year-old Peter Beardsley. Nonetheless, he slammed home the equalising goal halfway through the second half, stumbling through a block challenege as the other visiting defenders helpfully cleared the area.

In the end a draw was a fair result. 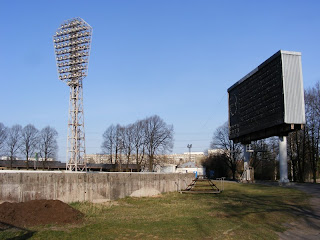 A twenty-minute walk from the railway station in one of Riga's dodgier neighbourhoods, Daugavas Stadions, the sometime home of Daugava Riga and Latvia's youth international teams, is exactly what you always imagined Eastern European football grounds to be: triangular floodlights like microphones on a 1940s radio show, a running track and roofless stand, and a monolithic scoreboard behind one goal.

Across town at the far end of Barona iela, LU Stadions used to be the home of FK Riga before they went belly-up at the start of the year. Squeezed between two of the city's busiest streets, it's the kind of place a skint English non-league team might share with the local cricket club. The grass was just a little too long, the fences beginning to rust, a few old men were hammering down nails in the main stand, and the signs outside were still advertising the start of the 2007 season. 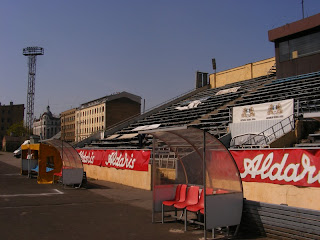