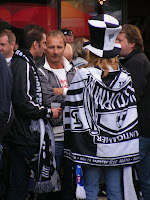 Even at nineteen euro fifty a go, the scarf around the wrist look, we decide, is very definitely still in at Sturm Graz. It's an hour before kick-off and we're sitting outside the stadium, drinking gassy beer from hard plastic glasses. Everyone around us is wearing black and white.

Strip away the heavy-handed policing and nine-tenths of football legislation and attending a match can actually be a pretty civilised experience. Groups of people mill around with half-litres of beer, eating Wiener Schnitzel and talking to their friends. Nobody worries about finishing their drinks before the match starts - they just carry them through the turnstiles, where the helpful stewards scan the barcodes from their tickets. Once inside the stadium men in Puntigamer t-shirts walk up and down the aisles with bags of doughy pretzels looped over one arm and metal trays of beer in the other. "Bier! Bier!" they shout, collecting four euro for each glass and returning one when you finish, all dangerously in sight of the pitch. And nothing bad happens (unless, that is, you count having to pay thirty cents whenever you need to use the toilet). 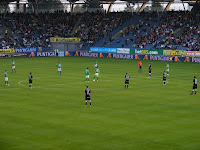 There are around ten thousand people in the ground for the visit of bottom-placed Mattersburg, and the Fansektoren to our right is jumping already. Elite Nord 08, Bastards 09, Black Swarm, Black Hearts and Murtal Front read the flags strapped to the back of the stand. A megaphone-wielding fan in a stripey jumper and baseball cap stands with his back to the play choreographing the chants. There are precisely twenty-eight people in the away section at the opposite end of the pitch.

"Put your money on Graz to score at least three goals," we were told before the match but both teams are as poor as each other and it takes until time added on for the home team to even look like scoring. At one point a Mattersburg player fails to control a through ball and the number 24 (the only player to show any sign of invention) looks on utterly aghast, shaking his head and throwing his hands in the air. "It's lucky the fans are good because the football's shite," is our Hansen-esque summary at the half-time whistle. 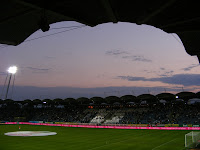 The second half opens with Mattersburg beginning to look the more likely team to score. A header is saved, Graz counter attack, and the referee waves play on as the forward tumbles in the box. "Nobody's scoring here," I say. "Nil-nil written all over it." Luckily I'm wrong. Fifteen minutes from time subsitute Mario Haas breaks through the centre and sidefoots past the keeper. And with the crowd still celebrating that one, Haris Buvka gathers a cross from the left, turns and shoots the ball into the top corner of the net.

Everywhere you look you can sense the relief. 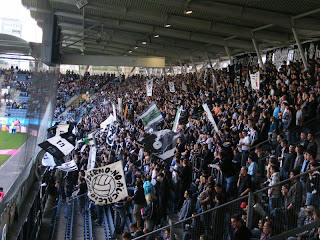 Waving flags before kick-off? That's what happens when you drink, see? 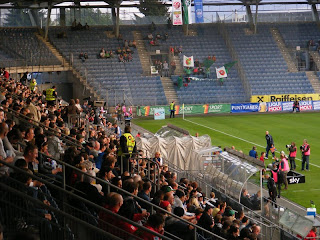 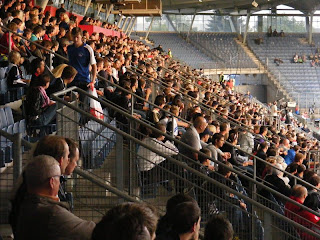 Beer and pretzels - he even comes to you. 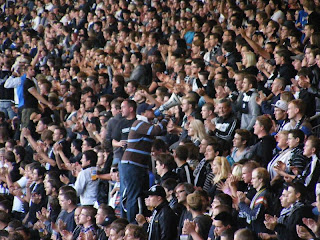 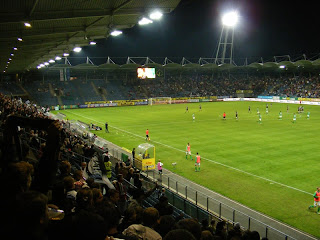