Rohan Ricketts' move to Dacia Chișinău was always likely to be one of the shortest and strangest footballing episodes of summer 2010.  "Moldova was just horrendous," the ex-Arsenal, Spurs and Wolverhampton Wanderers midfielder recalled after leaving for the German fourth division. "I had players take things from my room. (They) smoked in the changing rooms and drank four or five bottles of beer before games.  I was sitting in on meetings about match-fixing.  It was strange but almost amusing." 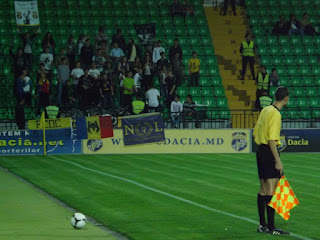 Founded in 1999 and champions of Moldova twelve years and a bit of alleged intimidation of officials later, Dacia are the capital's upstart football team, dislodging FC Zimbru, title winners in eight of the Divizia Naţională's first nine seasons, as the only threat to Sheriff Tiraspol's ongoing strangehold over the domestic game. Bankrolled by Gabriel Stati, occasional fugitive and eldest son of the country's richest man, the Yellow Wolves share Zimbru's eponymous stadium, twenty minutes on trolley bus 22 from the corner of Strada Ismail and Bulevardu Ștefan cel Mare, home to a branch of the ubiquitous Andy's Pizza, a glass-fronted casino, a half-finished apartment block with black bin liners fluttering in the space reserved for windows, and a nightclub with a plastic giraffe surrounding the door. Small wonder Ricketts spent so much time in his hotel. 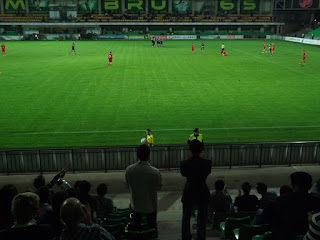 Some mumbled Russian and thirty lei gets us seats on the halfway line. "Shit! A quid fifty and we've already missed a goal," Tom jokes as the fifteen Iskra Stal fans finish celebrating their team's second minute opener. "Don't worry, there'll be more," says Mikey as Dacia's Evgheni Matiughin fumbles at a tame shot.  While Moldova's national stadium is a far cry from the last game of  football I saw - Red House Farm Juniors vs Cullercoats in the Northern Alliance Division Two - a turgid first-half means the gap in quality isn't always so apparent. "This is the worst game I've ever seen," Mikey moans after quarter of an hour.  "Try watching Spurs," says Lisa.  "It's brilliant you can smoke here," chips in Tom. "Is there a bar do you reckon?" Dacia, beaten 1-0 by Sheriff in their previous league game,  muster a hardcore support of just over fifty people and no more than a handful of attempts to equalise until the visiting keeper kicks a clearance against Cairo de Andrade's back and then tops the first mistake by letting the Brazilian forward's shot trickle under his hand. 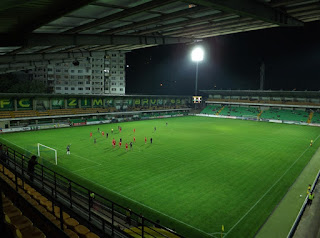 "What kind of place is this?" asks Mikey. "They don't have pies.  They don't even have beer."  "There's that bread thing," suggests Tom, his tone less convincing than the first-half display of goalkeeping.  As the second half begins the only thing on anybody's stomach is the belly laugh which greets Denis Ilescu when he calls for a header, misses the ball completely, slips on his front and ends up chesting the ball out for a throw-in. "He was on-loan at Anzhi Makhachkala," Tom says, scrolling through Wikipedia on his phone. "Imagine him and Eto'o in the same team." 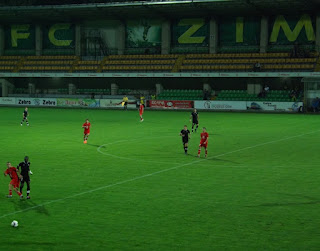 Adama Guira, a Burkina Faso international who played six times for Djurgårdens, ambles menacingly around midfield as the home side belatedly start to impose themselves. Ghenadie Orbu heads them into the lead, a third goal takes a deflection off a defender and the fourth - a free-kick which curls over the wall and through the keeper's hands -  is scored by Nicolae Josan, voted best midfielder in the Russian first division when he played alongside Ilescu at Anzhi. It's eleven o'clock when we get back to the city centre, the giraffe nightclub is closed for a private party and Andy's kicks us out after the second beer.  A small crowd of people are buying cans at a street corner kiosk, a car bumps on to the pavement blasting Gangnam Style through the windows and the neighbourhood dogs settle down for the night on piles of rotting leaves.  "It's a bit like Skegness," says Tom, "but about a hundred times worse."

It was nuts. The players were welcoming but smoked in the changing room and drank four or five bottles of beer before games.
“I was sitting in on meetings about match-fixing. It was strange but almost amusing.


Read more: http://www.thesun.co.uk/sol/homepage/sport/football/3830527/.html#ixzz2DJK9X8aY
It was nuts. The players were welcoming but smoked in the changing room and drank four or five bottles of beer before games.

It was nuts. The players were welcoming but smoked in the changing room and drank four or five bottles of beer before games.