Rivulets of rain stream down the windscreen, puddles widen, bunting sags miserably against the front of the village shop. ‘Welcome to Wolviston – Please Drive Carefully’ says the sign at the start of the village. “There’s nothing around here that looks like a football pitch,” we mutter, waving mobile phones in the air as we try to pick up a signal. 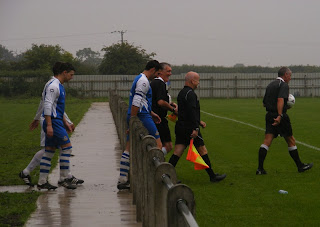 It takes a combination of Google maps, a cricket sight screen and three men under golf umbrellas helps us find Metcalfe Park just in time to see the two teams enter through a gate in the perimeter fence. The ground is next to a cricket club and garden centre, south of Wynyard Hall, west of the A19. The early arrivals in the crowd of 14 (excluding substitutes and club officials) hug the back row of the main stand, the only artificial cover outside of the two dugouts. We choose the shelter of a conifer hedge on the opposite side of the pitch, which keeps us semi-dry until the rain begins to cascade through the branches on the stroke of half time.

There’s been a football team in Wolviston since 1910, though the Wearside League – which the club joined in 1988 – remains the highest level they’ve ever reached. Three-time winners of the Sunderland Shipowners’ Cup since 2001, Wolviston ended the 2006-2007 season behind only Birtley Town and Whitehaven Amateurs (both since promoted to the Northern League), but have recently slipped back into mid-table, finishing thirteenth of the league’s twenty member clubs twice in the last three years. 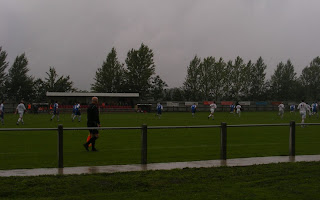 “Patience, lads. If we ping the ball around here they won’t be able to live with us,” Wolviston manager Martin Summersgill tells his team before the game gets underway. They do their best to follow instructions, playing most of the early football with their visitors from Sunderland, Ashbrooke Belford House, content to strike long clearances towards their lone centre forward, the 37-year-old Stephen Dickinson. The two teams put more pressure on the referee than on either goal until the 35th minute, when the Wolviston defence fails to clear a free kick and Dickinson sidefoots his first goal of the afternoon past the unsighted home goalkeeper.

The rain gets heavier and thunder rumbles over the pitch. “Are there many pools on the pitch?” someone asks over the cricket club fence. “I don’t know but there are plenty on my trousers,” comes back the reply. An equally ominous sign is the freedom being afforded to Wolviston’s Anthony Brown, the right-back finally managing to translate time and space into an accurate cross, Ryan Hebb turning the ball in at the far post for the equalising goal. When the whistle blows we scurry back to the car, missing the entertainment provided by a side-of-pitch lightning show. “You can hardly see out there, man. Forks of lightning and everything!” an Ashbrooke player exclaims when he’s substituted after the break. 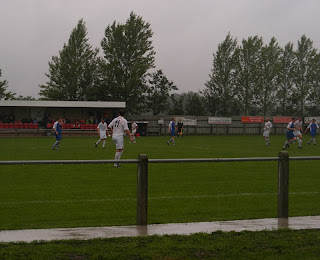 Wolviston undo their recovery work with two unforced errors in the opening five minutes of the second half, keeper Daniel Jeffry undergoing the kind of judgement malfunction more commonly associated with an England goalkeeper at Wembley. First, he races out and completely misses a through ball, leaving Dickinson with a tap-in second goal. A miskick from home captain Shaun Gregory lays on the third, Jeffry remaining static in the centre of his goal as Dickinson slams a shot in next to the right-hand post. Prompted by substitutes Matt Garbutt and ex-Hartlepool junior Christian Selby, Wolviston spend the remainder of the game in the Ashbrooke half, but a mixture of stout defending, ill-fortune and poor finishing keeps the score at 3-1, a late red card reducing the home team to ten men.

Driving home we hear Newcastle United’s game with Fiorentina has been called off after 63 minutes, heavy rain making the pitch unplayable. They could learn a thing or two from the Wearside League. 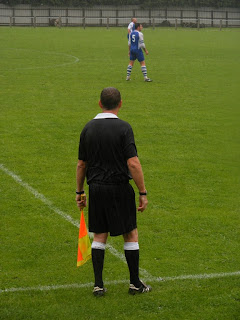