The year is 1975. By the banks of the Tyne in Dunston, newly absorbed into the Metropolitan Borough of Gateshead, an 8-year-old boy by the name of Paul Gascoigne dreams of emulating fellow local lad and future Gol TV commentator Ray Hudson, then a 20-year-old midfielder for Newcastle United. Brian Johnson, born in Dunston in 1947 and better known nowadays as the lead singer of AC/DC, is touring with the band Geordie and the Masters of Rock album they released the previous year. The Dunston staithes, first constructed in 1893 and the largest wooden structure to be found anywhere in Europe, are still being used to load coal from nearby coalfields into ships on the River Tyne, and workers at the Her Majesty's Stationery Office have just entered their own team, called Whickham Sports FC, in the Newcastle City Amateur League. 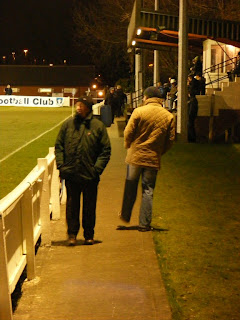 Initial success - including the Gateshead Charity Cup in 1978 and '81 and the Northern Amateur League Shield in '79 and '80 - eventually led to several name changes, a lease on a ground of their own (named, like the club at the time, after the local Federation Brewery), and a move to the Wearside League, which they won twice before leaving to join the Northern League in 1991. Promoted as Division Two champions at only their second attempt, Dunston, have maintained their top flight place ever since, winning back to back Northern League titles in 2004 and 2005, and finishing no lower than seventh in every season since 1997. One of the Northern League's most ambitious sides, along with Whitley Bay and Bishop Auckland The Fed have once again applied to join the Evostik North next season. 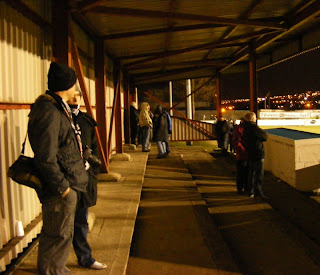 Tonight it's Northern League champions Spennymoor Town who provide the opposition in the semi-final of the Durham Challenge Cup, previously won by Sunderland, Darlington, Hartlepools United and, for the last two seasons, by Brian Clough's old team Billingham Synthonia. It's Dunston's third game - and indeed third cup game after Saturday's 2-1 FA Vase quarter final defeat to Whitley Bay and Monday night's 1-0 League Cup win over Team Northumbria - in just five days but a sizeable crowd has turned up nonetheless. Two covered stands square up to each other across the halfway line, bare poplar trees shield one touchline, and a telephone mast rises up from the other side of the pitch. Spennymoor's travelling fans congregate behind the dugouts and next to the goal nearest the tea hut. A lone supporter shivers in a bus stop; another shelters under the branches of a tree. 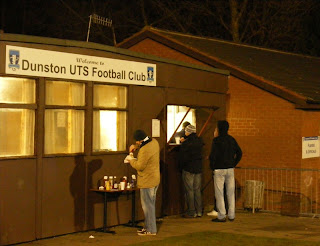 Spennymoor make the brightest start with the pacy Stephen Capper (Republic of Ireland skipper in the 2003 FIFA World Youth Championships) and Anthony Peacock (an FA Youth Cup winner with Middlesbrough) posing several problems down the left. A mistimed sliding tackle gets the visiting bench racing out on to the edge of the pitch. "Shocking tackle, that," "You bottled it" and "Absolute disgrace, ref" they complain, their voices carrying all the way to where I'm standing by the corner flag. "Off, off, off," chant the Spennymoor fans clustered behind the Dunston goal. 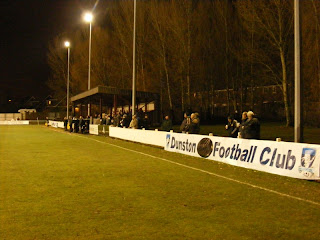 Although the home side have a couple of late chances, it's Spennymoor who have the better of the half, with only some smart saves and last-ditch defending - notably from skipper Ben Catternach - keeping the visitors at bay. Spennymoor are quick footed, lively and imaginative in possession of the ball. Dunston's more physical, direct approach is increasingly effective, though, as the rain starts to fall and the second half wears on. "Up the tempo here. Up the tempo!" Spennymoor manager Jason Ainsley urges his team. Possession ebbs and flows on the muddy Dunston pitch and the game gets scrappier and scrappier as both sides understandably begin to tire. With seventy-three minutes gone and Ainsley calling a substitute back to the dugout a forward pass catches his defence unaware and Andrew Bulford dinks a shot over ex-Sunderland keeper Craig Turns into the corner of the net. "Switched off again," comes the shout from the visiting bench. It looks likely to be the winner until Michael Rae leaps in a crowded box and nods in off the side of his head. "Ah man," complains a Dunston fan, "I can't stop for extra time, me feet are frozen as it is." 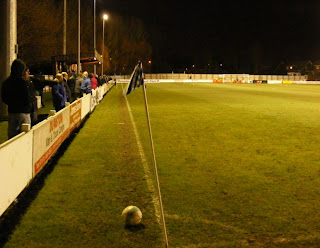 Another thirty minutes and the first three penalties of the subsequent shoot out - one scored apiece, the next two missed - can do nothing to separate the two teams. But then Dunston score twice, and when O'Connell pulls off another save it's the home team who go through to the Good Friday final against Gateshead Reserves at Eppleton Colliery Welfare. More disappointment for Spennymoor, FA Vase favourites before they fell at Poole Town in the fifth round. For Dunston, it's a massive achievement and the chance of their first major trophy since their league and cup double of 2005. "Phenomenal," says manager Billy Irwin of his team's effort after the game. 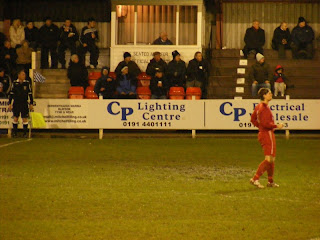