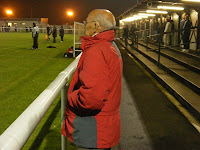 'Welcome to Ashington CFC' reads the sign at the entrance to Woodhorn Lane, home of the famous old club since Portland Park was sold for development and demolished to make way for a 24-hour Asda. In February 2008, the last ever game there drew a crowd of almost 2,000, but tonight there are more people in the supermarket than the 276 watching Ashington take on Spennymoor Town.

Once inside, the new ground comes as a bit of a letdown. Two flatpack stands are positioned across each end of the halfway line. Clean, functional and perfectly adequate for their purpose, they nonetheless have all the character and individuality of a mail-order catalogue, with corrugated sides, bolted-down metal floors and fluorescent strip lights in the roof. There are hoardings for Wansbeck Labour Party, Unison and the National Union of Mineworkers on the wooden fence that rings the pitch. Behind the near goal is a single-storey pale-brick building with changing rooms, a social club and a window selling food, and the club shop is in a shipping container parked over by the turnstile. Plenty of scope for later development, you might say.

Ashington take eight wins in a month and a lengthy injury list into their game against last season's Northern League champions. Both sides have a similarly lax view of the necessity to defend but Spennymoor, with two fast wingers, prove rather better at taking their chances, going two-nil up within the first fifteen minutes. "We're gonna get hammered now," an Ashington fan begins telling me as his team kick the ball forward and Phil Bell, just signed from Whitley Bay, hammers a rising shot that the goalkeeper doesn't see until it's in the top corner of the net. "Fucking hell," he splutters. "Where'd that come from?"

The home side aren't buoyant for long. Two minutes later Spennymoor win a tackle in midfield, the Ashington goalkeeper dithers about coming out for the pass, and Michael Rae clips the ball around him and rolls it into the empty net. Three-one, and according to my watch we've only played twenty minutes.

Ashington are nervy in possession and increasingly absent in midfield, but it takes another half hour before Spennymoor add a fourth. They respond by making three subsitutions and scoring another two goals. "Easy, easy," starts a strangulated cry from the away fans. "They're organised these," an Ashington fan observes as a Spennymoor player lobs the ball high above the keeper, turning away before it hits the net. In the stand behind the perspex dug-outs, the inquest has already begun. "You could use injuries as an excuse at four," says a man between mouthfuls of chips and gravy, "but six is just embarrassing." "Aye, not getting the boot in," his mate agrees. "Too many games, isn't it?" muses someone in a tracksuit who looks like he's hoping for a call from the bench. "Look at all the players we've got out." "Divvent give up, Ashington," encourages a player. "You're chasing shadows, man," laughs a voice from the back, but the home team get some kind of reward in the final minute of the game when a clearance smacks against Phil Bell's face and drops for an Ashington player to score what football commentators like to call a consolation goal. Someone tries to start a chant of "We're gonna win 7-6" but most of the crowd have already gone home. 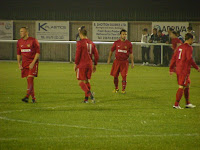 We get back to the car to find it's been used as target practice. There's a size eleven dent under a damaged wing mirror, scratches and conker marks on the boot and a tub of chilli sauce poured all over the roof. The car in front has had both wing mirrors writhed off and dirty footprints along the sides. "Yous shouldn't have parked there, like," a neighbour helpfully observes. If only I had a football... 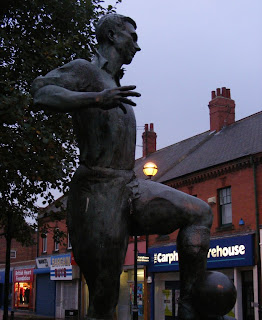 The Jackie Milburn statue is halfway up Station Road, the town's main street. Much to our disappointment the penalty spot from Portland Park was nowhere to be found in Asda's deli section, though they did do some decent cakes.
Posted by Michael at 16:34