This is Annfield Plain. Twelve miles south-west of Newcastle-upon-Tyne, overlooked by the Pontop Pike TV mast and hometown of ex-cruiserweight champion of the world ‘Gentleman’ Glenn McCrory; “most of Annfield Plain is made up of housing, a few run down shops and several pubs,” its Wikipedia entry promisingly states.

The town’s had a football team of its own since 1890, when Annfield Celtic first came into being. Northern Football Alliance champions in 1920 and 1923 and runners-up, as Celtic, in 1904, Annfield Plain AFC later had a mostly unremarkable 40-year spell in the now-defunct North Eastern League before switching to the Wearside in 1964. 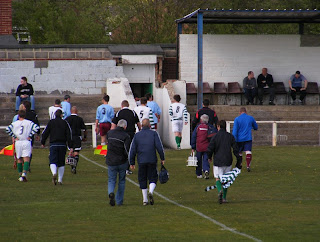 Three times – in 1926, 1928 and 1964 – Plain reached the First Round proper of the FA Cup. York legend Norman Wilkinson – “one of the most loyal and outstanding players ever to appear for City,” in the words of the club’s official history, and a man who knew about FA Cup success himself, having played up front in the York side which famously took Newcastle United to a semi-final replay – finished his playing days with the club in the Wearside League. Wilkinson worked as a cobbler while turning out for York, commuting from north-west Durham – where he lived at home and looked after his elderly father – by public transport for matches. After retiring as a player, he worked the Annfield Plain turnstile, helping to sell raffle tickets, take down the nets and retrieve stray balls. 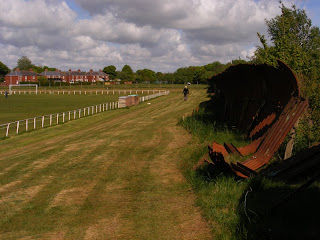 Norman Wilkinson wasn’t the only famous striker to run out at Derwent Park. Ralph Allen, who scored 47 goals in just 52 games as a Charlton Athletic player in 1934-35, ended his career here too. Andy Graver, Lincoln City’s record goalscorer, left Plain to sign for Newcastle United in 1949. Reg Keating also ended up at St James’ Park, later scoring 35 goals in two and a half seasons with Cardiff City. In August 1993, Kevin Keegan and a Newcastle United side made the opposite journey in a pre-season friendly arranged to mark Plain’s centenary and raise funds for the West Stanley Colliery Disaster Memorial Fund (on 16 February 1909 an explosion in a pit shaft killed 168 men and boys. Frank Keegan grandfather of the future England captain, was one of the 30 or so who got out alive). Cypriot international Costas Costa, once of FC Utrecht and Olympiakos Nicosia, scored his only goal in a black and white shirt with a shot from inside his own half. Back then, it still wasn’t enough to earn him a contract. 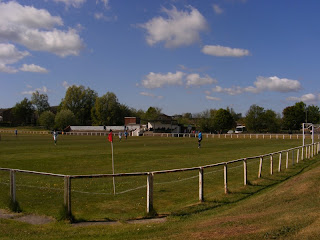 Plain, Wearside League champions once previously in 1985, had a managerial messiah of their own in the late 1990s, Kenny Lindoe – now at Consett – leading the club to a second title in 1998. Lindoe left for Brandon United - Derwent Park not meeting the Northern League ground criteria – taking the Durham club from third-bottom to Division Two champions in two seasons and, even more improbably, holding off Bedlington Terriers – title winners five years in a row – to finish top of Division One three years later.
Without Lindoe, Brandon slipped back into Division Two and Annfield Plain have never finished higher than last season’s sixth place, one behind today’s opponents Cleator Moor Celtic, who’ve travelled from the Cumbrian birthplace of Kangol hats and one-time England keeper Scott Carson. Plain take the lead after 25 minutes when the current Celtic custodian (Carson came through the youth ranks at Cleator before moving on to Workington and Leeds) taps a free kick back out onto Paul Henderson’s head, the on-loan Consett forward heading in at the post. “Come on boys, it’s only one goal,” a Celtic player shouts, but neither he nor any of his teammates can threaten the Annfield Plain goal. The pitch, lovingly cared for, is bordered by grassy banks on three sides and a rusty corrugated fence, propped up with metal posts and bent inwards at the top. A crumbling stand provides rudimentary cover, with several steps of terracing and some plastic chairs along the back row. At half-time the players disappear down a whitewashed tunnel, vandalised by ‘John, Tom and Deano 2009’. 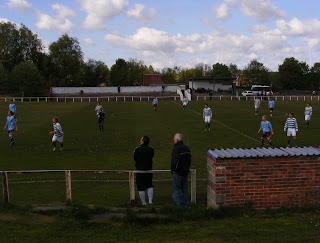 “Same again, lads,” the Annfield Plain keeper says at the start of the second half. With the wind at their backs the home side have a shot hacked off the line and hit the crossbar twice before Jonathan Kemp heads in direct from a corner to finally kill the game. “What a bastard surprise,” says the Cleator number 10.
Admission: £2
Date: May 2nd 2011
Posted by Michael at 08:25