“Make a grass-field soccer stadium in Kasugai!” pleads the opening line of the Kasugai Football Federation’s website, the accompanying petition signed by more than a sixth of the 300,000 people who live in the town. “For the future of your children, please lend us your support.” 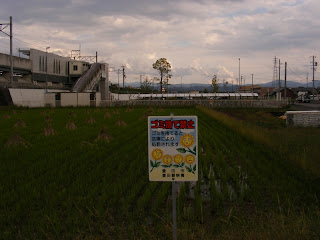 The bright lights of Kaizu Station.


Kasugai Football Club could definitely use a little bit of that. With a website last updated at the beginning of the year, they’re forced to play their home games on the grounds of Chukyo University’s Toyota Campus, whose ‘A’ and ‘B’ teams occupy the top two places in the Tokai League’s Division Two.  Champions themselves in 2002 and 2006, Kasugai were immediately relegated on both occasions and are currently no higher than fifth of the eight teams which comprise the second-tier of the Tokai Regional League (and the fifth-tier of Japanese football overall).  That’s still three places ahead of Volare Hamamatsu, whose name is derived from their hometown and the Latin for ‘to leap’, “relating to the team flying to high places” as their website – subtitled 'From Hamamatsu to the J-League' – helpfully explains. 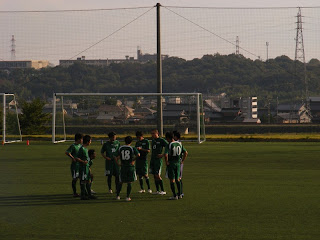 Kasugai huddle
By far the best thing about Kasugai’s exile is the maglev ride to the ground. The $574 million Linimo Line was constructed for the 2005 World Expo, linking north-east Nagoya to nearby Toyota City. Automated trains glide noiselessly eight millimetres above the track.  “We will soon make a brief stop at Aichikyūhaku-kinen-kōen,” says a voice in flawless, slightly American accented English shortly after passing the Toyota Automobile Museum. “The doors on the left side will open. Should you encounter any trouble on the train, please notify a station attendant.”  I change at Yakusa, the end of the nine-kilometre line, sharing an Aichi Loop Line train as far as Kaizu Station with a pack of high school students in matching Hummel tracksuits, Meito Challenge emblazoned across their shoulder blades. 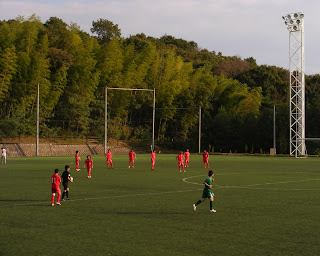 Around the edge of a rice paddy and straight on through a cabbage patch, I hear the first whistle as I crest the hill and see Kasugai - resplendent in dark green shirts – kick off towards the scoreboard at the forested end of the ground.  Volare (whose red shirts signify “blazing passion and our extreme combative heart”) defend the clubhouse goal. The twenty or so people already in attendance sit on a grass bank and concrete with their backs to an American Football pitch.  The home side look more accomplished in possession but Volare - in their first season out of the Shizuoka Prefectural League - are more incisive when it counts, player-manager Takayuki Uchiyama smacking a waist high volley which clanks back off the underside of the crossbar, drawing a ‘Woah, woah, woah’ from two thirds of the crowd. 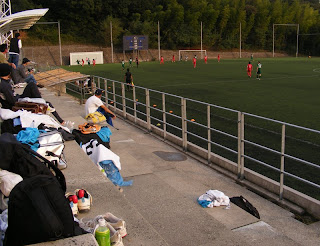 With their number thirteen exuding a Death Star grip at the heart of the defence, Kasugai build patiently, hitting the post when a cross evades a congested goalmouth and finds a forward lurking at the far post. It’s a miss they soon have cause to regret. Volare prove that if you can’t go through a centre half you can at least go round him, Daniro Munemori stumbling through two challenges on the left of midfield before squeezing a shot that loops up and in off a defender’s big toe, earning three hugs and a slap on the arse from his grateful teammates.  Kasugai come back strongly, Kengo Wakuda making a slapstick triple save which ends with him dragging his shorts back up as he rises from the ground. Very Bruce Grobelaar. 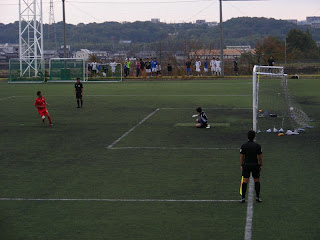 
Volare sit so deep in the second half I begin to suspect the halfway line is electrified. Kasugai throw on their substitutes and force a steady stream of corner kicks, but their touch grows progressively less certain the closer they get to the Volare goal. With a minute left to play, Takayuka Tsuboi is upended during the away side’s first real foray towards the Kasugai end of the pitch, and Uchiyama sends the keeper the wrong way to seal only their third win of the campaign.  Nobody said that football was fair. 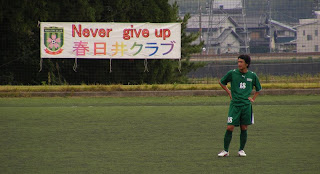 I may have committed a serious breach of groundhopper orthodoxy, but despite living just a ten-minute cycle ride from Nagoya’s Mizuho Athletics Stadium, since moving back to Japan I’ve found more interesting – or, to state the case more plainly, more immediately rewarding - things to do with my time than watching football. Prospective games have passed me by, blogging has been shoved unceremoniously onto the back burner, and two blank weekends turned into a third when my plans to take in Sunday’s Nabisco Cup semi against Kashima Antlers were foiled by the perfect storm of a punctured front tyre, a 1pm kick off, two shrimp and potato pizzas, a man with a horse’s head and a pet hairstylist from Peru. Run of the mill on a night out in Nagoya. 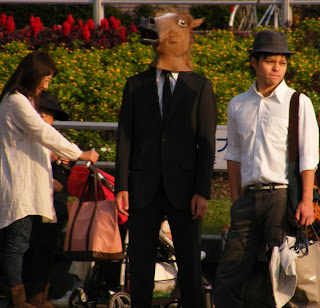 Another one.
With Grampus’ last three home league games of the season either taking place at the football-only Toyota Stadium or, in the case of Saturday’s potential title-decider against Gamba Osaka, sold out before my belated attempts to procure tickets, the Emperor’s Cup second round game with Suzuka Rampole was potentially my last opportunity to see a game at the Mizuho. Rampole – probably the only team in world football to derive the second word of their name from the pseudonym of a mystery novel writer - play in the first division of the amateur Tokai League, four divisions beneath the reigning Japanese champions, but with Grampus facing their third home cup tie in seven days and Gamba next up, coach Dragan Stojkovic had already revealed his plans to rest most of his regular starting eleven. Out went last season’s J-League Player of the Year Seigo Narazaki, Australian forward Josh Kennedy and the Brazilian-born defender Marco Tulio Tanaka, in came ex-Tokyo Verdy keeper Yoshinari Takagi, 20-year-old midfielder Taishi Taguchi and Kensuke Nagai, a recent star of Japan’s Under-22 side. 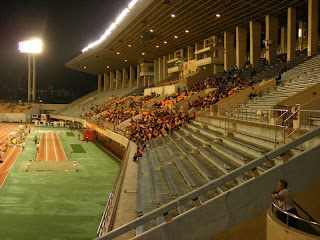 The main stand
With just fifty minutes to spare between getting out of work and the scheduled kick off, there was no time added on for stoppages in my final lesson of the day, the students shooed out to facilitate a race to the station and a just-in-the-nick-of-time arrival at the Mizuho ticket booth. Hand waving and repetition of the word for ‘cheap’ got me a 2,000 yen ticket alongside Nagoya’s ultras in an uncovered end behind the goal (even with the fall in the value of the pound from 248 yen in 2008 to 117 yen today that’s still only slightly more expensive than a seat at some League Two grounds). “Forza Grampus!” the six or seven hundred ultras chanted in unison, part of an impressive repertoire which peaked at a catchy ‘Oh, oh, oh, oh’ number accompanied by mass bunny hops and a bass drum solo. ‘Here is our Treasure’, ‘This is Home’, ‘La Famiglia Rosso Giallo’ and ‘Pixi’ read the banners tied around the running track boundary. At the opposite end of the pitch, around 200 Suzuka fans – bussed in from neighbouring Mie Prefecture for what would inevitably be their team’s last game of the season – pogoed around the empty spaces, waving giant flags in the manner of a Formula One marshal. 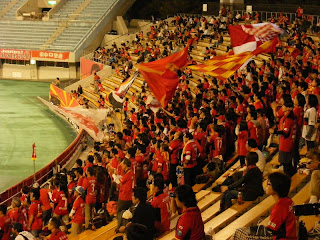 The Grampus ultras
Nagoya started with Montenegro international Igor Burzanović behind Nagai and Stojkovic doing his customary pacing of the touchline. Within 19 minutes his team was two goals to the good, Burzanović opening the scoring on the quarter hour before Koji Hashimoto rounded Makoto Mizutani in the Suzuka goal after the visitors lost possession and were picked apart on the counter. Tidy in possession but toothless in attack, Rumpole’s problems were compounded when forward Jumpei Yano was shown his second yellow card with ten minutes of the half to play, moments after Burzanović had added a third. Suzuka sit deep, not bothering to press the ball until Nagoya cross the halfway line, and leaving themselves vulnerable to pace and overlapping attackers – a combination of which indirectly resulted in the home side’s fourth goal, defender Tatsuya Arai heading in direct from a corner. There was still time in the half for Hashimoto to slip a first time shot inches wide after a one-touch passing move undressed the away side down the left. Suzuka’s only reply was a forward burst from centre-half Shinpei Sakaki, which ended when he blazed his shot horizontally across Takagi’s goal. A minute-long rendition of ‘Nagoya Grampus’ serenaded Stojkovic’s side off the field at half-time. My vantage point
“There is always the possibility of the unexpected,” Stojkovic had said in his pre-match press conference, but the second half was as predictable as the first. Nagoya, now able to open up space at will, were content to play keep ball as Suzuka encamped themselves between the halfway line and the edge of their area. Akira Tanaka came on for Nagai after 55 minutes, making an immediate impression as he leisurely slid past two defenders before placing his shot straight at the goalkeeper. Suzuka managed a long range shot into Takagi’s chest and another which rolled just wide with the goalkeeper flailing, but in the 80th minute Tanaka got the goal he’d been waiting for, sidefooting home after two Grampus players had worked the ball around the exposed Masanori Murata in the Suzuka defence. The left-back had better luck moments later when he headed the ball off his own line, though Grampus added a sixth regardless, Burzanović’s 88th minute shot striking a defender’s boot and trickling apologetically over the line. At the final whistle Suzuka’s players and coaching staff were afforded a heroes’ reception by the away support while the Grampus team bowed an acknowledgement to each of the stands in turn before lining up to salute the ultras. 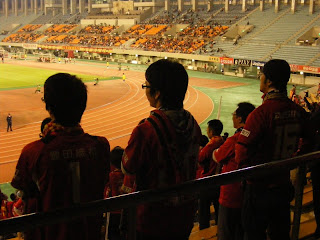 Now in its 91st year, the Emperor’s Cup is Japan’s most prestigious knock-out competition, stretching to seven rounds, eighty-eight teams and a New Year’s Day final at Tokyo’s National Stadium. Nagoya - two-time winners of the tournament in the 1990s - progress to play J2 side Giravanz Kitakyushu in mid-November’s third round, with potential ties against fellow title challengers Kashiwa Reysol and Yokohama Marinos to come before a December 29th semi-final. For Stojkovic, who recently lambasted his team for “playing like high school students” during a 2-0 defeat in Shimizu, a league and cup double remains a tantalising possibility. 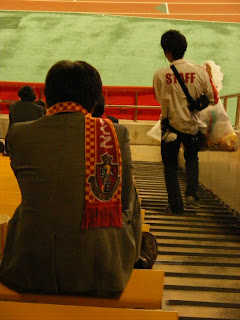 Attention Premier League clubs: this man brings beer to your seat and collects the empties afterwards. 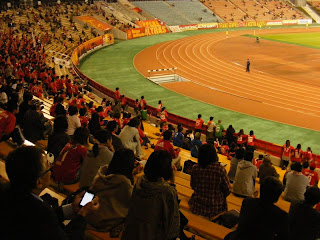 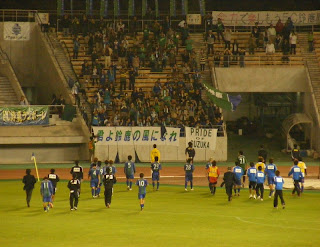