The last time I was in Odessa, in early 2010, the city's football club were playing in front of a few thousand fans at a two-sided, open-air stadium with an asphalt running track and a view of the Comedy Theatre.  We could have done with some laughs. At the end of the season, after failing to win any of their last eleven games, Chernomorets were relegated for the third time in fourteeen years.  "It's the indifference that gets me," grumbled a supporter as we filed out towards the train station. "They'll be lucky to get cockroaches here next season." What they got instead was Roman Grigorchuk.  A three-time title winner in Latvia with FK Ventspils, Grigorchuk arrived at the quarter point of the season with the club floundering in midtable, managed promotion in his first year, survival in his second and briefly threatened the top four last winter, eventually making do with sixth and a Europa League place after a 3-0 shellacking by Shakhtar in the Ukrainian Cup Final.  Somewhere in the middle of all that, almost a year to the day since Grigorchuk replaced Igor Nakonechny as head coach, the redeveloped Chernomorets Stadium finally opened in November 2011 after three years of delays, squabbling and escalating costs.  The new stadium was built on the site of the club's original home, the Soviet Central Stadium of the Black Sea Shipping Company, a classic roofless-bowl-with-running-track design constructed on land the city authorities had just flattened for a boating lake before realising they'd run out of cash. 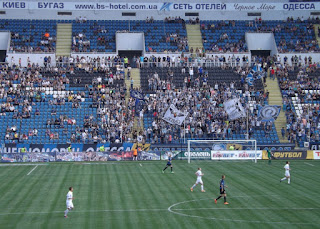 Baboushkas line the approaches to the ground flogging bits of dried fish and sunflower seeds out of carrier bags and plastic water bottles with the tops cut off.  Fans sit on the base of the Taras Shevchenko statue to smoke cigarettes, or wander along broken-up paths to slug back beer and piss against tree trunks. The outside of the stadium looks like a cross between a shopping mall and a Habsburg railway station, queues building on the staircases while stewards punch holes in tickets.  Inside, the Chernomorets anthem meanders along like a losing semi-finalist in the Eurovision Song Contest.  My seat's behind the goal the home side are attacking, directly opposite the few hundred Odessa ultras, with the nineteen Arsenal Kyiv fans up and to my left glowering behind their flags. 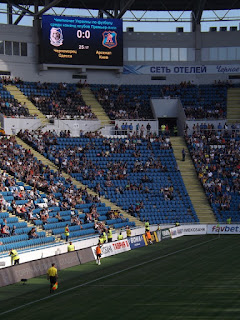 After a winter run of nine wins and a draw, Chernomorets have faded since the season resumed  in March, winning just one of their last eleven league games.  Their problems in attack - their top scorers, the Albanian international Elis Bakaj and Lucian Burdujan, a Romanian U21 cap and cup winner with Rapid Bucharest, have just five goals each all season - are evident early in the half.  Leo Matos, FIFA U17 World Cup winner in 2003 before his talent burned briefly at Marseille and Flamengo, crosses, Bakaj plants his feet, screws his eyes closed and....BANG! Folds up like an ironing board, the ball ricocheting downwards off his head and harmlessly bouncing off a hoarding.  When the home side do threaten its down to the fleet-footed Matos on the right of midfield. Mainly they don't, the well-organised visitors keeping Vladimir Gomenyuk up top for nuisance value, Allardycing the midfield and allowing all the opportunities Matos wants to overhit crosses from the flank.  Just before the break, Arsenal almost manage to force the ball over the line three times in the messy goalmouth scramble that follows an uncleared corner kick.  The referee's whistle brings a faint smattering of applause and a couple of boos with most of the crowd already running for a beer. 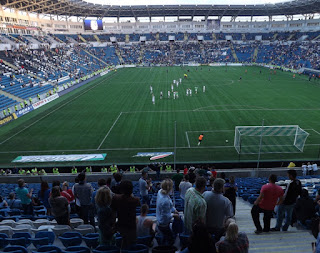 Arsenal come out all guns blazing...over the crossbar.  With the home fans losing interest, a steward swoops on a sunburnt teenager in a trilby hat who refuses to stub out his cigarette, the argument brought to a sudden end when a Gomenyuk shot bounces over their heads.  By now, things are dire enough on the pitch to prompt the first Mexican Wave.  In response, a plastic bottle is thrown against the frame of the goal.  "Odessa, Odessa," rolls down from the stands as Sito Riera - whose more talented brother Albert played for Liverpool, Manchester City and Spain - comes on for Anatoliy Didenko, a kind of Emile Heskey mixed with Peter Crouch.

With eight minutes left  Bakaj runs unchallenged across the edge of the area. "Shoot!" yell the crowd. Gently, he passes the ball sideways into completely empty space.

That's the kind of game it was. 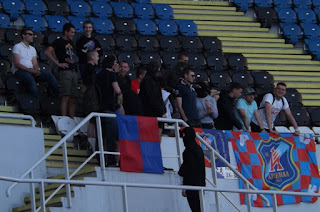