A couple of miles north of Newcastle Airport, Ponteland's the kind of place where people still clip their hedges and spread gravel on their drives. There's a sign for the cricket club's game with Greenfield at the entrance to the Leisure Centre, a stone bridge over a gently burbling river on the opposite side of the road, and two women discussing hollyhocks in a garden next door. You couldn't get more ITV detective drama if John Nettles turned up with a murdered vicar and a plate of cucumber sandwiches. 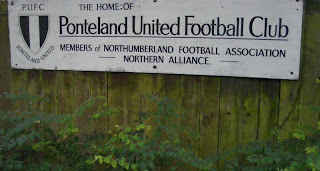 Put the words 'Ponteland' and 'Football' together and the first thing you think of is Darras Hall, a housing estate for the nouveau riche where lottery winners, businessmen and Newcastle United footballers share the same leafy streets. But the town and football go back a lot further than Andy Carroll's bail arrangements, Alan Shearer's golf swing or a burnt out car on Kevin Nolan's drive. Formed in 1900, Ponteland United led a mostly uneventful existence before joining the Northern Alliance in 1983. Under the management of Ken Scott, Paddy Lowery, Barrie Wardrobe and finally Jarrod Suddick, whose father Alan made over 450 appearances for Newcastle United and Blackpool, the club won three Northumberland Senior Benevolent Bowls while narrowly missing out on a sucession of other trophies. 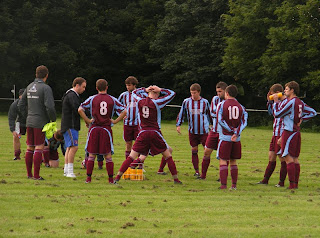 League runners-up twice and ten-time beaten finalists in the Alliance's two major cup competitions, United finally got their hands on the Challenge Cup in 2010 and added their first league title in May, Harry Tulip's winner at home to Blyth Town putting Suddick's team one point clear of Alnwick with just three minutes of the season left to play. With Alnwick now in the Northern League, United started the new campaign by beating Seaton Delaval Amateurs 4-2, Tulip once again scoring the game's final goal. Harraby Catholic Club, third last year and seen by many as the main threat to Ponteland retaining their title, were even more impressive in winning 4-1 away at Heaton Stannington. Long grass and rusty railings surround the Leisure Centre pitch, the Harraby players out kicking balls through the grass shavings. "This pitch is gonna hold up, no doubt at all," their coach shouts, handing out bibs. "More on the ball. Don't give them an excuse to make the game tight." Harraby line up in a 4-3-3, the coach still giving instructions to his defenders as the captains shake hands. Ponteland walk out silently a minute before the game kicks off. "From the whistle," their keeper growls. "Pressure."

After scoring two penalties at the weekend, Ponteland's Paul Hodgson limps off with a groin strain in an opening twenty minutes enlivened only by Richard Kent's trickery down the right and the home keeper fluffing a tame shot out for a corner. "Fuck off," shouts the frustrated Harraby left-back, already beaten twice by Kent, as he slices a pass out for a throw. "Do you know any other words?" asks a Ponteland fan. "It's this pitch, isn't it? It's a jungle," a defender replies. Despite their complaints, Harraby manage the first shot on target and almost follow it with a goal when a cross is booted away from on - or just over? - the line. 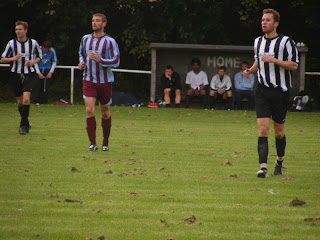 Into the second half, Ponteland's keeper saves with his feet before a near post header direct from a corner gives the away side a lead they just about deserve. Their second is messier, a sustained bit of possession on the right hand side of midfield ending with a misplaced cross deflecting in off the big centre half's chest. By now it's all Harraby, the Ponteland keeper turning a shot around the post as his teammates are suddenly incapable of stringing two passes together. With five minutes left Tulip outpaces a defender but his shot dribbles back off the post. "Thing is, this is probably the worst Harraby team I've seen in ages," says a home fan as the visitors close the game out. "Absolutely awful," is Tulip's verdict on Ponteland's display.