A uniformed official in a peaked cap and face mask runs white-gloved hands down both sides of my bag at the entrance to FC Gifu’s Nagaragawa Stadium, while a second holds out a free programme in a club branded carrier bag and a third politely snips the edge off my ticket. Two bows and a choral thank you later and I’m inside. Food stalls sell Asahi beer in paper cups, hamburgers, skewered chicken, grilled octopus and rice flour dumplings dipped in soy, while three squad players sign autographs in a corridor and the oendan supporter groups hang out their flags: ‘Hellas Gifu’, ‘La Nagaragawa’, ‘Now and Here!’, ‘We Love You FC Gifu’ and ‘Techniek Hartstocht’ (Technique and Passion if you trust Google’s ability to translate from the Dutch). 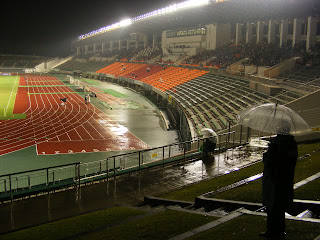 At first glance the Nagaragawa is as unpromising a venue as most other Japanese football grounds. There’s the same concrete bowl exterior, the running track and hoardings keeping you further away from the action than Victor Valdes, the Brobdignagian-sized Subbuteo scoreboard, backless plastic seats, and the main stand roof, as wide and flat as a windowsill and ergonomically designed to shelter no more than five of the seats below. And then there’s the grass. Clipped to the length of a tennis court, kerbstone stepped at two-metre intervals and covering the upper half of no fewer than three sides of the ground, it’s precisely the kind of quirky horticultural feature that distinguishes a genuine football stadium from your common or garden multi-purpose facility.  All that’s missing is a Brechin City hedge. Or maybe a Loko Vltavin one.  With the rain teeming down and the few steps under cover already full – only the umbrella carrying, plastic poncho wearing oendan are braving the elements tonight – I head along to the far side of the stand where around a hundred Sagan Tosu fans are segregated by two lengths of rope and a sign saying Keep Out in English and Japanese. 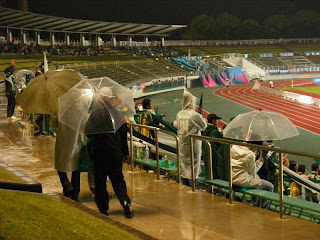 After Gifu’s meteoric rise through the lower leagues – they won every game they played between late-2002 and their promotion to the Tokai Regional League in 2004 - the grass has recently been significantly greener off the pitch than on it for the hard-up club.  Only five wins all season have left Takahiro Kimura’s side firmly rooted to the foot of the table, twelve points and a negative goal difference of thirty-one behind second bottom Gainare Tottori.  Sagan – the only team to have played in all thirteen seasons of Japan’s second-tier professional league, are threatening to escape J2 for the first time since their last set of bankruptcy hearings, an unbeaten run of ten wins and three draws propelling them to second in the league with just six games remaining. With fourteen goals shipped in three successive defeats, Kimura makes five changes and switches his formation to a 4-2-3-1, the on-loan Omiya Ardija player Ryohei Arai given the job of buffering the two centre backs, Shogo Shimada and Hidemi Jinushizono hugging the flanks so tightly they could almost be wearing running spikes instead of studs, and big striker Yudai Nishikawa brought in as the pivot up front. 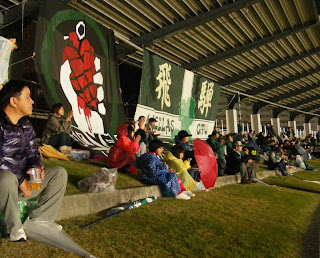 The two sides cross the running track to the noise of piped music, Sagan fans pogoing under their pink and blue flags and Gifu bounding rhythmically to the beat of a drum. It’s the league’s whipping boys who immediately look the better team, the constant pressing from Nishikawa and Shimada unsettling Sagan’s play while Jinushizono's relationship to his marker is like that of matador to an enraged bull. In the 16th minute the little winger’s cross finds Shimada, whose shot is blocked by a defender’s hand. “Akahoshi,” the Sagan fans chant at their goalkeeper, but Shimada coolly Panenkas him to give his side their first lead in four games.  The closest Sagan come to mustering a reply is a header from ex-Vitória  Setúbal midfielder Kim Byung-suk which 20-year-old keeper Goro Kawanami watches past his post and a free-kick from the same player which Kawanami erratically fists into the ground and away for a corner. Everything is going exactly to Kimura’s plan until full-back Kazuki Murakami damages his knee ligaments midway through the half, necessitating a reshuffle which sees Yuki Oshitani brought on to play off Nishikawa and Shimada covering in defence. No longer able to outflank their opponents, Gifu go down the middle instead, Arai playing a ball over the top for Nishikawa, who shrugs off Keita Isozaki and, with the very last kick of the half, finds the corner of the net via Akahoshi’s right hand. The Sagan fans – who’ve been bouncing up and down singing "Ey! Ey! Sagan Tosu" while fanning the air in front of their faces – go quiet as their team troops off, one spending the half-time break with his eyes screwed shut, head bowed and palms pressed together in front of his face. 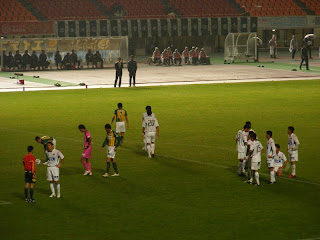 The Shinto gods respond by turning Gifu back into their ordinary selves. Within fifteen minutes Yohei Toyoda brings the scores level, the panicking home defenders twice failing to clear crosses into the box. A minute later Kawanami fumbles a bouncing ball, but manages to scissor kick Ryuhei Niwa’s shot away. A punt upfield finds Oshitani, who manoeuvres past two challenges and bends the ball around the retreating goalkeeper. A Hollywood goal, but it doesn’t count for any more than the scruffy flick off Toyoda’s head ten minutes later which gives the striker his 20th goal of the season and his first ever J-League hat-trick. 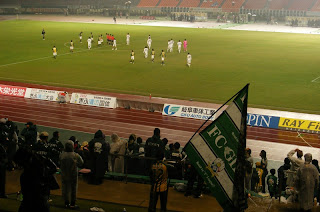 It takes until the 83rd minute for Gifu to renew their passing acquaintance with the ball, Nishikawa attempting a Zola backheel flick which hits against a defender’s shin and dribbles over the line off his big toe.  With time running out and both sides kicking the ball in any direction they can, a mishit shot falls to Niwa, his jab at goal evading Kawanami’s left glove and putting Sagan three points clear of fourth-placed Tokushima Vortis, who they face in the Pocari Sweat Stadium in the season’s penultimate game. 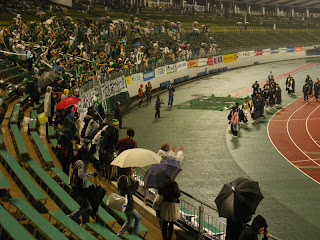 “We worked really hard but in the end we just couldn’t win,” Gifu midfielder Kazanori Kan tells the club website. “We were lucky to draw,” says Sagan’s Naoyuki Fujita. “Not good enough,” reckons their South Korean manager Yoon Jung-hwan.  “Control Gifu and you control Japan” was a favoured axiom of the Warring States Period. Sagan Tosu will settle for their first ever promotion and a season in J1.
Date: 30th October 2011
Admission: 1,500 yen
Posted by Michael at 12:44