Underground to Tsukiji-guchi, cross water twice, turn left at Inaei Station and keep an eye out for the floodlights. That, and a 600 yen Donichi Ecco Kippu ticket, was all the preparation I’d done for the 11.30am kick off in the Tokai University Soccer League. Google Maps made it look like a two-mile walk each way; the weather forecast was for 9 mm of rain and an 80% chance of thunderstorms. In the end it was four, the sun beat down between squally showers and the closest we came to thunder was the applause for the third goal. 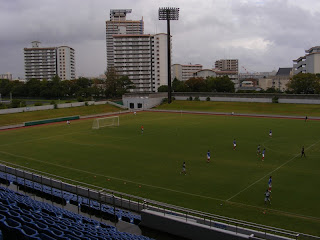 Look for the floodlights: bulbs like bug-eyes studded in rows above cylindrical, rusting poles. You could see them all the way from Inaei, rising above the trees, a concrete overpass and a Brazilian church cladded with ersatz brick. I take a short cut through a park, old women in golf visors power walking the pathways and kids in Mao collars practising their baseball swing by a Circle K convenience store. 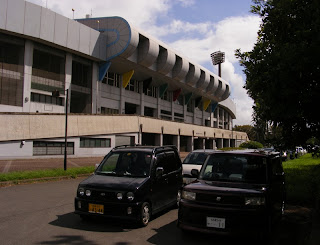 I just about catch kick off through an unlocked metal gate before joining the hundred or so fans scattered along the top of the main stand. The rain blows in at angles, pushing everyone into the centre where a mini-roof hangs over the empty hospitality boxes and a man in a Chukyo University polo shirt is recording the game on a hand-held camera. The ball boys sit on folding chairs, hoods up and see-through plastic ponchos pulled right down to their feet. Behind the harbour-side goal is the Asian football ground’s scoreboard of choice: LCD display mounted on concrete with two clock faces on the side – one telling the time, the other ticking off the forty-four minutes still to play in the half. On the pitch, Chukyo University, dressed like Glasgow Rangers in red, white and blue, have already taken the lead. The greens of Gifu Keizai attack, the ball bounces in front of goal, and the scoreboard blinks before switching to 1-1. Although I didn’t know it at the time, for both Gifu and I the best part of the game had already been and gone. 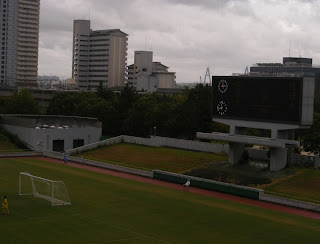 Chukyu might be dressed like Rangers but they don’t play like any team Ally McCoist’s ever likely to send out, their centre halves resembling a pair of somnambulant pinball flippers as they slap passes back and forth across the defence. There’s a man and a dog at the back of the stand, but unlike England nobody disputes the referee’s decisions and the closest you get to bad language is the Keizai keeper’s “Aaagh!” when he miskicks the ball out of his hands for a throw-in. The few latecomers bow to people they recognise in the crowd, while at half time two women in short skirts and baseball caps stand by the entrance handing out small cans of Red Bull for free. 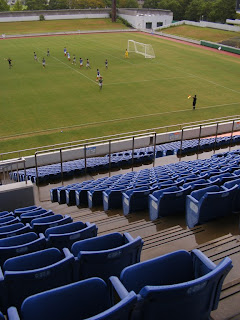 By then Keizai are two one down, a deflected shot earning a smattering of polite applause and four clucks of the tongue from a man sitting behind. While Chukyu are short on verve and cutting edge up front – even their free kicks are two-yard passes - Keizai look like they wouldn’t know which end of the knife to hold on to, their most prolonged spell in possession a block from an outstretched boot that gets passed out of play five touches later. Chukyu extend their lead with a quarter of the second half counted off on the scoreboard clock, their central midfielder calmly finishing off a minute-long passing move, and stroll through the remainder of the game. The sun comes out, heads start flopping in the seats to my right. “Dozo,” (Please) a Keizai forward shouts as he sets off on a run for a pass that never comes. 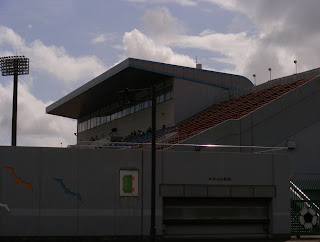