Until the 1980s there was a pit wheel overlooking Boldon Villa's football ground. Both would have been familiar sights to Sam Bartram. On Saturdays he would start his early shift down the mine at four in the morning, then turn out for the football team at three in the afternoon. 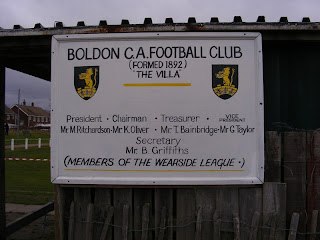 Born in South Shields in 1914, Bartram's family moved the few miles to Boldon Colliery at the end of the Great War. He played for Sunderland and Durham Schoolboys, started out at Boldon Villa playing wing-half, then switched to centre-forward while at North Shields where, partnering his uncle in attack, he scored 33 goals in just 25 games, including six in a single match against Wallsend. In 1934, aged 20 and back with Villa following an unsuccessful trial match with Reading, he volunteered to play in goal when Boldon's regular keeper was injured before a cup final replay. In the crowd that day was Angus Seed, whose brother Jimmy, once of Tottenham Hotspur and England, had recently been appointed manager of Charlton Athletic.

Bartram signed for the Addicks in September 1934. Despite conceding eight goals in his opening two reserve games, he soon broke into the first team as Charlton finished eight points clear of Reading at the top of the Third Division South. He would remain Charlton's first-choice goalkeeper for the twenty-two years which followed, his 623 games encompassing all three divisions of the Football League, second, third and fourth place finishes in Division One and two successive FA Cup Finals. "Sam is to Charlton what Matthews was to Blackpool or Milburn to Newcastle," says Mike Blake, author of Sam Bartram: The Story of a Goalkeeping Legend. Today, within a goalkick of the Valley you'll find Bartram's Restaurant, Sam Bartram Close, the Sam Bartram Gates and a nine-foot bronze statue of "Charlton's greatest ever goalkeeper", balancing a ball in the outstretched fingers of his right hand, sleeves rolled back, and polo-neck shirt tucked in to his shorts. Supporters raised £60,000 in a mere nine months to pay for it: "Charlton without Sam is like Laurel without Hardy" as the inscription on the 1950s bubblegum card went. 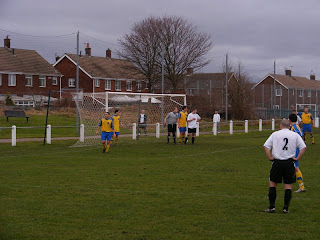 Although he was never capped, Bartram achieved international renown. "With his polo-neck woolly sweater, voluminous bloomers, hulking boots and Desperate Dan chin," wrote The Daily Telegraph in 2004, "Bartram has come to represent his generation of footballers; his brooding sepia image adorns the window of a photographic shop in Paris while, even more curiously, his life-sized cut-out is on display in Marshall Fields, the biggest department store in Chicago, for the simple reason that the manager of 50 years ago (who knew nothing about 'soccer') decided Bartram's presence would lend a certain charm." 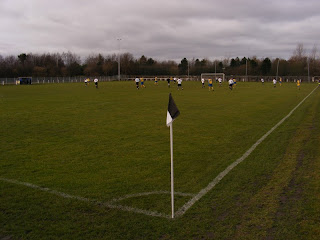 And yet he isn't the only link between Boldon Villa and Charlton Athletic. Four months after signing their goalkeeper, Jimmy Seed - born in nearby Consett and an ex-Wearside League player himself - returned for Villa's 17-year-old full-back, Jack Shreeve. Both Shreeve and Bartram played in the FA Cup Finals of 1946 and 1947, Charlton emphatically losing the first to Derby County but winning the second 1-0 against Burnley in front of 98,215 fans (they had beaten Newcastle United, the team Bartram had grown up supporting, 4-0 in the semi-final). Later that year, the two men paraded the Cup around the streets of Boldon Colliery after Charlton had played at Sunderland. Another Boldon goalkeeper, Harry Smith, signed for the London club at the same time as Shreeve. A decade later, Ron and Jack Vitty followed them south. Jack would go on to make almost 250 appearances for Brighton & Hove Albion and Workington Town. In 2008, Boldon hosted the inaugural Sam Bartram Cup. Charlton Athletic donated a signed goalkeeper's shirt, which still hangs in the clubhouse. 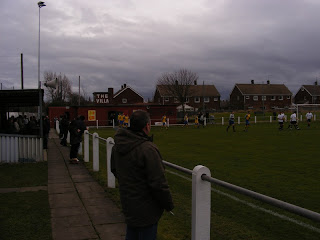 One of the Wearside League's eleven founding members, Boldon Community Association are a club whose current ambitions match the size of their history. Despite their lowly league position (second bottom, ahead of only Prudhoe, and five places behind visitors Stockton Town), the club plan to apply for a place in the Northern League within the next two years, having raised over £24,000 in grants and donations to improve the facilities at Boldon Colliery Welfare. Hard standing now rings the touchline, and floodlights were installed at the beginning of the year. Less than a day later, though, copper thieves removed 185 metres of cable from under the sides of the pitch, digging trenches three-feet deep before dragging the cable out through a hole in the perimeter fence. “Devastated is probably the only word that’s printable to describe how we’re feeling at the moment," club secretary Bryn Griffiths told The Shields Gazette. "For five years we’ve fundraised and applied for grants. The lads have given up their free time at weekends and after work to dig out the trenches for the cable, and just as everything was coming together, someone has gone and done this." 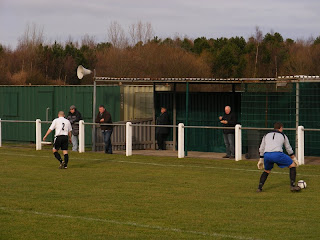 Sited between a social club carpark and a bridle path, Villa share an entrance gate with the Boldon C.A. Sports Ground, home of Northern League club Jarrow Roofing. Our arrival, right on kick-off, swells the crowd to twenty-four. There are a couple of green portakabins, a loudspeaker tacked to a corrugated roof and an all-brick clubhouse, painted red, with Villa in white capitals on the chimney.

Both sides struggle on the sodden pitch, but it's Stockton who create the chances in a one-sided first half. A quick break sees two attackers bearing down on goal. "Now! Now!" urges the onrushing number 10, but the sideways pass bobbles, hits his shin and dribbles harmlessly wide of the post. "Ah, man!" he shouts, clutching the back of his head. Minutes later, an almost identical move ends with the number 11 sliding past the prostrate keeper. "That's five times that, man," complains the Boldon right-back. "It's them ower there," the centre-half points to the left, "they're not deeing nowt."

Things are more even after the break, and only some truly atrocious attempts at finishing keep the score at 1-0. Ten minutes from the end, it's the visitors who finally kill the game. A diagonal ball out of midfield splits the gap between two defenders and the low cross is angled back past the diving keeper into the bottom corner of the goal. For Boldon, it's a seventeenth defeat in just twenty-three league games. 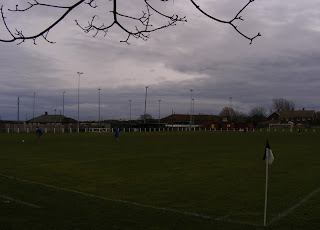