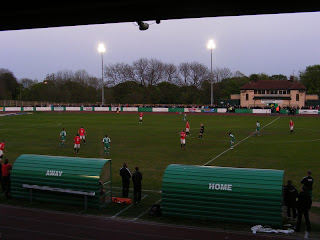 For much of the season, promotion seemed little more than a remote possibility for Bradford Park Avenue and FC United of Manchester. After their FA Cup heroics at Rochdale and Brighton, FC were next to bottom at the turn of the year, until a run of two defeats in twenty games lifted them into fourth, one place behind the similarly resurgent Park Avenue, who finished the regular season with eight wins out of nine. 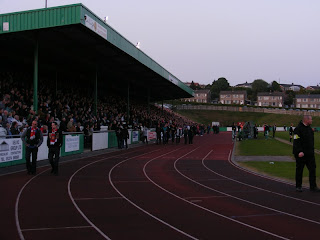 “We’re up for it, we’re ready and we’re confident. We don’t mind who we play or where we play them. We’re a nomadic team, we’ve not got a home of our own so we play wherever we have to,” assistant manager Roy Soule tells the FC website, but United haven’t won in five previous visits to the Horsfall and there’s a palpable lack of confidence in the pub before the game. “Three-nil to them,” a mate tells me as we join the lengthy queue to get into the ground. “I think we’ll get stuffed, but I’m still hopeful,” another says. After a fifteen minute delay while the near-3,000 crowd tries to enter through the stadium’s two turnstiles, both pessimists are quickly proved wrong. Bradford keeper John Lamb does well to parry a shot from the prolific Mike Norton, but the left boot of Matty Wolfenden sparks bedlam in the tea hut queue, which otherwise hasn’t moved much since the two teams finished their pre-match warm-up. 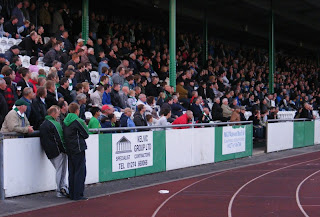 Bradford have the better of the half but rarely threaten with Chadwick and McManus imperious at the centre of defence. The home side’s best effort comes direct from a corner, the ball striking the angle of post and bar. “Let’s play football, United,” a fan shouts as it’s hooked up towards Norton. The noise in the single stand is relentless, the 2,000 travelling FC supporters going through a repertoire of songs which includes The Beach Boys, Woody Guthrie, The Carpenters, Ewan MacColl, The Inspiral Carpets, Norman Greenbaum, The Drifters and The Sex Pistols. “Come on Avenue,” a few voices shout as Bradford press forward before half time. 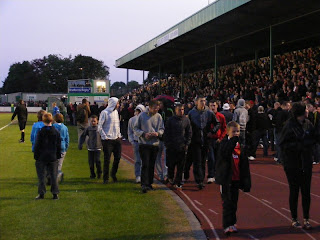 The game has barely restarted when United’s front two combine once again to put the result beyond any doubt. Norton’s pass to Wolfenden is misdirected / struck perfectly through the covering defender’s legs into the path of Jerome Wright, who turns the ball at the far post, a Bradford player tumbling after it. Bodies surge forward, scarves twirl maniacally overhead. Some run on to the pitch, joining the heap of players in front of the stand. A Park Avenue defender looks across, arms folded over his chest, shaking his head in dismay. When James Riley is shown a second yellow for dissent only moments later, it’s all over for the home side. Riley stomps off, still remonstrating about a free kick. “Won’t pay Glazer, work for Sky,” sing a couple of thousand delirious Mancunians. 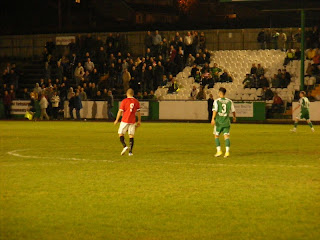 The ten-men have chances, Aiden Savory and Tom Greaves – scorer of a hat-trick when Park Avenue put four goals past United at the start of the season – both going close. The home fans begin to drift away. “We’re going to Colwyn Bay,” booms out as the other play-off ends in a 2-0 win for the Welsh side at home to North Ferriby United.

Somewhere down the line it became fashionable to knock FC United. “Why couldn’t they just go and watch a non-league team that was already there?” people ask, as if tribal loyalties have nothing to do with following a club. “The Chelsea of non-league football,” they sneer, although the stadium development fund and the rent they pay to Bury means the club’s playing budget is one of the smallest in the division. “Hypocrites,” they yelled when they switched their cup-tie with Rochdale for live TV in return for cut-price tickets for both sets of fans. “It’ll never last,” they tell you, though Alan Gowling said the same in the summer of 2005. “We’re gonna build our own ground, we’re gonna build our own ground,” serenades us all the way back to the car. With fans like these, you don’t doubt it for a moment.

FC United of Manchester – one win away from the Conference North. 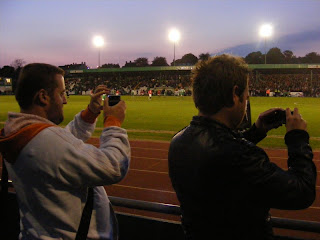