Founded in 1878, Edinburgh University AFC are the third oldest of the East of Scotland League’s twenty-four member clubs and the most successful University side in the whole country. Awarded the Edinburgh Shield – the world’s third-oldest trophy after the FA and Scottish Cups – in 1883, when Hibernian were unable to raise a team to play in the final, the club lifted its twenty-fifth inter-Scottish Universities League earlier this year and went all the way to the final of the British Universities Championships before losing out to UWE Hartpury. 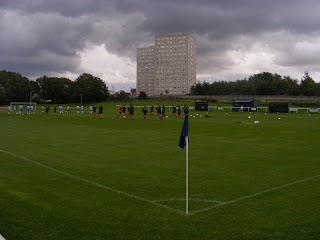 Full members of the Scottish Football Association, the students reached the third round of the Scottish Cup in 2008, beating Highland League side Deveronvale 3-1 in front of 350 fans at Peffermill Playing Fields before controversially exiting to a last-minute goal at Cove Rangers. Success has been more elusive in the East of Scotland League: since joining in 1926 the University has only the 2002-03 First Division title to its name.

Stepping up from junior football in 1979, when the league they were playing in withered to just six teams, Whitehill Welfare have since lifted a record Premier Division fifteen titles and twelve League Cups. Champions in each of their first four seasons, their most recent success came in 2008 when they pipped University to the title by a single point. Last season only goal difference kept the two apart as they finished fourth and fifth in the league, while an East of Scotland Qualifying Cup meeting earlier this month ended in a goalless draw. 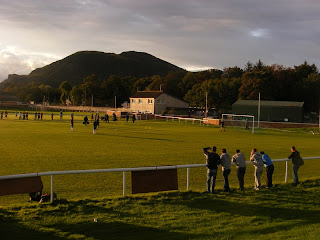 There’s a crowd of around sixty for the opening night of the new league season, including five looking out of a wooden portakabin, the front latched open and a portable cricket scoreboard propped against the side wall. Beset by absence and injury and outmuscled in midfield, University sit deep, hitting balls high and early over the Whitehill defence for their lone forward to chase after. “Referee, they’re slowing the game down,” visiting coach Andy Gray complains. “Could the keeper move any slower? It took him twenty seconds to get the ball back there.” “We’ve only played fifteen minutes,” Douglas Samuel shouts back from the home dugout. 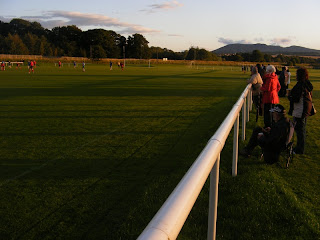 “There’s goals tonight, there’s no danger of that,” a Whitehill fan says between drags on a cigarette. But though his team do everything short of walk the ball into the net they don’t have anyone to finish the approach work. “We innae Barcelona,” Grant Kearney says on the Whitehill bench. “Use your feet, move the ball,” manager Rob Paget shouts. “He can dribble but he can’t shoot. He kicked the ball like a three-year-old there.” When they do get a shot on target they can’t find a way past University keeper Mark Tait, a third year Medicine and Pharmacology student who had “the most outstanding game of his career” the last time the teams met.

At half time I join the queue for the tea hut in the pavilion, where a cup of coffee’s just 50p and the walls are covered in signed shirts, pennants and team photographs. A Newcastle United shirt, autographed by Alan Shearer and presented by a fan, hangs by the entrance to commemorate the club’s Scottish Cup run of 2006 when they knocked out Highland League side Keith before losing 5-1 at Cowdenbeath in the second round. 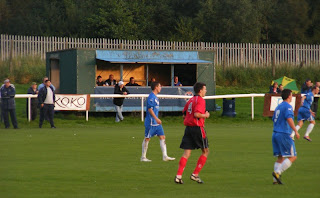 Whitehill pick up where they left off after the break but the closest they come to a goal are a few long range shots and a dive in the area that only succeeds in winning a yellow card. “We’ve got to change something,” a man in a University training jacket says, "we can't hold out like this." “It’s coming, it’s coming,” shouts a Whitehill voice as a University player blocks a shot with his shin and another careers off his back. In the 87th minute it finally does, trialist Kevin Moffatt striking past Tait after the University defence fail to clear the ball. “About time too,” says a Whitehill fan.

Admission: Admission: £4 (I think). I unintentionally snuck in by walking across the fields from the main entrance and didn’t see the board until half time.