Far and away the Republic of Ireland’s biggest and most successful football club, Shamrock Rovers - sixteen times Irish League Champions, seven-time winners of the All-Ireland Cup and almost a hundred other trophies, including fifty-five FAI and President’s Cups alone – have a haul of domestic honours to rival that of Manchester United, though their recent history bears a slightly bigger resemblance to Charlton Athletic or Brighton & Hove Albion. 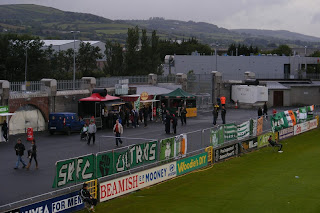 For more than sixty years, the club were synonymous with Milltown, a suburb of Dublin on the old Harcourt Street railway to Bray. Rovers moved to Glenmalure Park in 1926, the year after they’d added the FAI Cup and League of Ireland Shield to their second title win of the new decade. The ground was built on land leased from the Order of Jesuits, its main stand and terraces built by some of the 18,000 supporters present at the first ever game, a friendly match with Belfast Celtic. Among the many famous names to grace the Glenmalure pitch were Jimmy Dunne, a league title winner with Arsenal in 1934, Liam Tuohy, who gave up a job at the Guinness brewery to sign for Newcastle United, and Johnny Giles, player-manager at the club from 1977 to 1983. When Giles left for Vancouver Whitecaps, Jim McLaughlin coached a team including Liam O’Brien – Ron Atkinson’s last ever signing at Manchester United – and future Racing Santander forwards Alan Campbell and Liam Buckley to four league titles and three FAI Cups between 1984 and 1987. 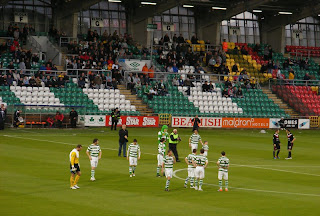 Despite their success on the pitch, attendance figures in the League of Ireland had long been on a downward trend. In early-1987, Shamrock’s owners, the Kilcoyne family, announced their intention to sell Glenmalure – “a jaded old shithole” to many Irish fans - for development and relocate the team to Tolka Park, north of the River Liffey. An FAI Cup semi-final against Sligo Rovers in front of 6,000 fans would prove to be the club’s last ever game at Glenmalure, though it took another three years before the Keep Rovers at Milltown campaign eventually conceded defeat. “Things took off very quickly,” KRAM’s chairman Liam Christie later told the Sunday Tribune. "We were getting money in as quick as possible from everybody . . . supporters on the ground, supporters away in America and England. They even got a publicity firm involved, very much like, say, a politician would do, and the whole campaign was to get as much publicity as they could in the newspapers, on the television and on the radio. I was just an ordinary Joe Soap, but the politics of things amazed me. Then there were Rovers families that were split down the middle over it. I know there was one household with four or five of them who went to all the Rovers matches but two of them decided to pass the picket and go into the matches and the others wouldn't, and there was a civil war in their house.” 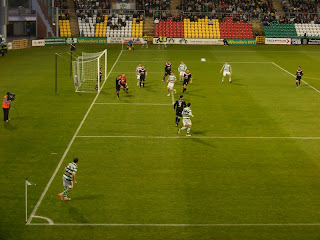 On March 16th 1990 An Bord Pleanala, the independent planning regulator, overturned an earlier decision by the Dublin city government and granted permission for houses to be built on the Glenmalure site. The ground was demolished, the only marker that it had ever existed a memorial stone paid for by Rovers fans. By then a supporter boycott of Tolka Park had forced the Kilcoynes out, a consortium of fans buying the club and moving it back south of the river to the Royal Dublin Showgrounds. In 1996 plans were unveiled to move to a permanent home in Tallaght, a distant suburb of the city whose name translates as plague burial place. It took thirteen years and another planning battle before Rovers played their first game there, defeating Sligo Rovers 2-1 in front of a capacity crowd of 3,000 fans.

Further development has doubled Tallaght’s capacity in the intervening two years, the addition of temporary stands enabling 10,900 people to witness Cristiano Ronaldo’s debut for Real Madrid in July 2009. The all-seater stadium has covered stands down both sides of the pitch and views of hills and a shopping centre behind either goal. Glass-coated high rises with fashionably angled rooftops and wraparound balconies peer over the angle of the West Stand rood, leading back towards the final stop on the Luas line to central Dublin.

Defending champions Rovers start the game in first place, narrowly ahead of city rivals St Patrick’s Athletic. After tying their flags behind the goal, Shamrock’s ultras congregate at the far end of the East Stand, faced by a noisy cluster of 50 or so fans who’ve travelled from Dundalk. 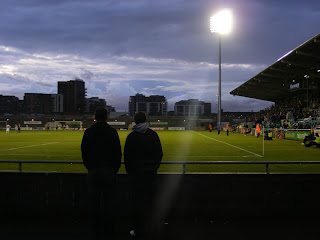 Belying their midtable position, it’s the away side who create the best of the game’s early chances. A clipped ball intersects the home defence, Alan Mannus saving with his chest from Mark Griffin. Moments later Mark Quigley, once of Millwall and Shamrock Rovers, lobs wide of the post with only Mannus to beat. Rovers are stronger and more direct, moving the ball forward quickly for their front pairing of Gary Twigg and Gary O’Neill. With the size of Rovers’ centre halves – Ken Oman and their English-born captain Dan Murray - suggesting an imperviousness to the high ball, Dundalk are more intricate in possession, the front three of Griffin, Quigley and ex-West Ham junior Daniel Kearns constantly interchanging positions and pulling the home defence around like the bellows on an accordion. With 22 minutes gone, Keith Ward exchanges passes with Quigley before slipping the ball left to the unmarked Griffin, the young forward stroking it past the despairing Mannus to put the visitors ahead. Twigg has a goal disallowed for offside and Dundalk’s Peter Cherrie saves from Gary McCabe but while Rovers huff and puff it’s the away side who come closest to a second goal, Mannus scrambling off his line to deny Kearns.

It takes sixty minutes for Rovers to begin ratcheting up a concerted spell of pressure. It takes another two for Dundalk to extend their lead, Griffin getting an unimpeded run on to a Ross Gaynor free kick and looping a header over Mannus for his fourth goal in six games. Manager Michael O’Neill, another Rovers man with Newcastle United connections, responds with two quick substitutions, Twigg replaced by Karl Sheppard and Chris Turner coming on for Stephen O’Donnell. By now the rain, which has been falling incessantly since moments before kick off, has reached a kind of Niagara Falls intensity, driving the crowd upwards and inwards as it swirls through the open sides of both stands.

We’re up to seventy-nine minutes before Rovers finally manage a foothold, Cherrie punching a cross off his own player’s head and Turner hitting the ball back into the net with the goalline unguarded. The home side are invigorated, only a fantastic save from Cherrie denying Oman an equaliser, but we’re into injury time – and the first big push towards the exits – before Billy Dennehy seizes onto a long Pat Sullivan cross and heads a leveller the home side barely deserve. “That’s why we’re champions,” chorus the Rovers ultras. The rain stops abruptly and I even manage to get a seat on the Luas back to O’Connell Street.