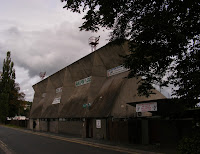 Members since 1923 and eight times champions, Gala Fairydean are better known for their attempts to get out of the East of Scotland League than for anything they've done in it. Four times - in 1966, 1994, 2000 and 2002 - they applied to join the Scottish Football League - and four times they missed out. Professional football now seems further away than ever: in 2005 Gala were relegated to Division One, where they've remained ever since.

Visitors Peebles have had a similarly mixed history. After a short-lived spell in the Scottish Football League (they were part of the original Division Three, which ran from 1923 to 1926), they joined the East of Scotland League in the late-1920s and made the Fourth Round of the Scottish Cup twice before falling so low that in the 1982-83 season they were relegated with a goal difference of - 177 from just thirty-four games. Two years ago they almost repeated the trick, finishing a twenty-two game season with a goal difference of -112. 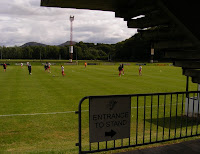 Football doesn't get its own way in the Scottish Borders. The game was switched to Galashiels with just a few days' notice because the local cricket club takes precedence at Peebles' Whitestone Park ("Fixtures are of a liquid format and are liable to change with very short notice," as Gala's website tactfully puts it). And it's the next-door rugby stadium - along with Twickenham, the Millenium Stadium and the Stade de France one of the host venues for the 1999 Rugby World Cup - that you see first as you arrive in Galashiels, closely followed by Peter Womersley's cantilevered main stand, built in concrete in the early-60s and awarded a Category B listing by Heritage Scotland ('Anger Over Listing for 'Soviet' Football Stand,' reported The Scotsman).

At kick-off the crowd was 37, including a dad and two kids having a kickaround behind the goal. The two linesmen had been pressed into service late. One was wearing jeans and had a mobile phone poking out of his jacket pocket. The other, dressed in a white shirt, tie and cardigan, waddled across the pitch to the centre-line, where he stayed for the rest of the game, framed by hoardings for The Auld Mill, Window Doctor, ££ CASH IT IN £££ and the SNP. 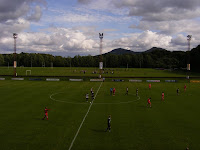 The inevitable moment of contention arrived a quarter of an hour in. A turn and shot was blocked in front of goal with the linesman busy checking his watch. "It was in," screamed the Gala bench. "Referee, you have got to have a better view than that." Not that it mattered much. Two minutes later, with one linesman chatting and the other halfway up a grassy bank with his back turned to the pitch, Gala went one up with a clipped finish from the edge of the box.

Worse was still to come. A ninety-second spat between a Peebles defender and the home number nine - "Ref, he elbowed me." "Shut up fatty." "Do you want to see my medals, son?" - ended with away team a man down. As the Gala player jogged across to take a corner, the Peebles number four, still lying on the ground, reached up and grabbed him by the ankles. Out came a second yellow, off went his shirt. "Did yer medals slow you down?" came the shout from the stand. With Peebles in disarray, the second goal wasn't far behind: a low-shot from twenty yards that went straight through what passed for a defensive wall.

The third came twenty minutes into the second half. A corner bounced around the six-yard box, a Gala boot hit it into the ground, and it bounced past half the Peebles team into the middle of the net. Number four was even simpler: a quick free-kick from the Gala half and a clip over the keeper with the Peebles' defence claiming offside. The linesman was twenty-metres behind play, his flag hanging from a side pocket. 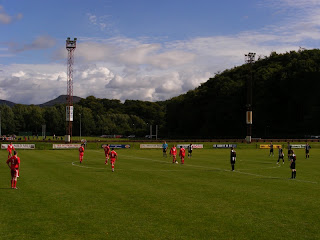 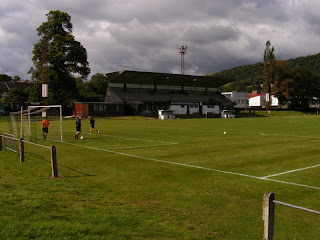 The main (and only) stand. 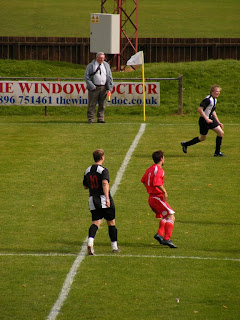 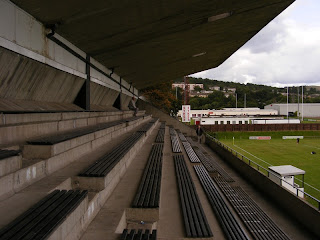 Is anyone sitting here?
Posted by Michael at 18:40