December 17th 1887 was a pivotal day in the history of three of England's biggest clubs.  At St James' Park, home gound of Newcastle West End, Shankhouse Black Watch's amateur footballers went down 9-0 to holders Aston Villa in the fourth round of the FA Cup.  The losing team were amply compensated, the £100 gate receipts - a new record for football in Northumberland - double what Villa had offered to switch the tie to Birmingham, but there was a more enduring financial legacy for their temporary hosts, West End's secretary Tom Watson later resigning his position partly due to criticism of his handling of the 7,000 crowd.  Watson had secured the lease on St James' Park and helped make West End the city's pre-eminent team; his departure contributed towards a decline which saw the club subsumed by Newcastle East End five years later.  East End's return to prominence began with Watson's arrival in 1888, though the ambitious Tynesider - "the first truly great manager in English football history" - soon moved on to Wearside, building a Sunderland team which won three out of four Football League championships between 1892 - the year his former clubs came together as Newcastle United - and 1895.  Lured to second division Liverpool by a salary of £300 per year, Watson masterminded the club's first two league titles and remained in the post until his death from pneumonia in 1915, making him Anfield's longest serving manager. 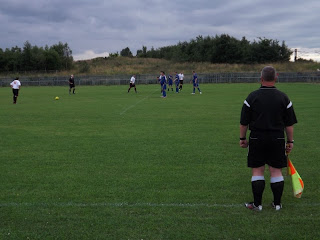 While Watson - at one point the highest paid secretary in England - seized on football's increasing professionalism, Shankhouse's time as one of the dominant forces in north-east football was drawing to a close.  Northumberland's first clubs, Tyne and Newcastle Rangers, started as leisure pursuits for the middle classes, their playing staff drawn from university students and schoolmasters, but the founding of Shankhouse by members of the local Primitive Methodist Chapel bible class in 1883 - after a team of pit workers from the village took on soldiers from the Black Watch camped at Cramlington - marked football's transition into a pastime for the region's industrial working classes.  Within a year there were seventeen teams in Shankhouse - population 1,000 - alone, although only two, Black Watch and Red Caps, lasted more than a single season.  Not everyone was happy with the changing demographics - an early visit to Newcastle left the city council complaining about "the foul language used by supporters of the Shankhouse club", while Tyneside newspapers later sniffily reported the dismissal of two Black Watch players for "roughness" and "kicking opponents in a most malicious manner." 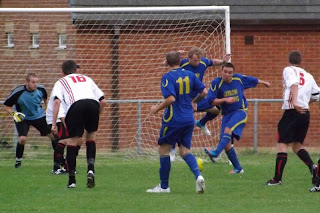 Northumberland Challenge Cup winners in 1887, thrashing Newcastle West End 5-1 in front of 5,000 spectators at Chillingham Road,  Shankhouse's miners played on land rented from a local farmer but were talented enough to win six of the first eleven Northumberland Senior Cups, including three in a row starting in 1893, when they were also champions of the Northern Football Alliance and played Notts County in the first round of the FA Cup. Prominent Black Watch players included goalkeeper Jack Milburn,  Robert Willis and Willie Thompson, scorer of Newcastle United's first Football League hat-trick. Another future Magpie,  Bob Benson, was renowned as "a terror to opposing forwards" during spells with Southampton, Sheffield United, Woolwich Arsenal and England.  Shankhouse moved to a custom built ground at Arcot Park in 1896 but declining attendances and the money needed to pay players eventually took their toll. In 1905 a public meeting raised enough cash to stop the club from folding, but the following year the team finished bottom of twelve in the Alliance and were only able to stave off extinction by merging with Shankhouse Albion and dropping into the Blyth and District League. 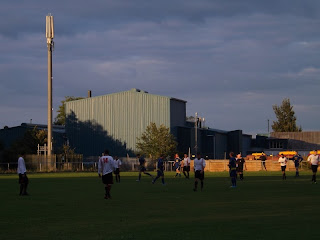 It took 122 years for Shankhouse to win a second Alliance title, Gary Kirkup's side beating Ryton and Team Northumbria - both now in the Northern League - to top spot in 2005.  After fifteen years in the job, Kirkup stepped down this summer, replaced by his long-serving assistant Johnny Wilson.  Jarrow Roofing, founded around the same time as Shankhouse re-entered the Alliance in the late-1980s, also changed bosses in the close season, Paul Bennett joining from Hebburn Town to take charge of the team alongside the indomitable Richie McLoughlin. Roofing's new additions - including several of Bennett's old Hebburn Town squad - make them promotion favourites -  "a first division team in second division colours" reckon the nonleaguezone hoi-polloi. 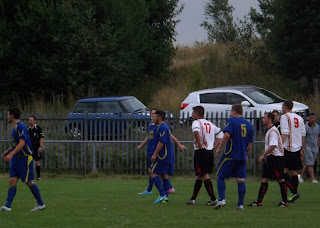 It  looks a fair enough assessment after 37 seconds, the visitors' first attack ending with Paul Gardiner tapping in.  Shankhouse reply with a one-on-one that the excellent Dan Regan tips away and a free kick that heads over the perimeter fence and into the scrubland separating the pitch from the East Coast mainline.  All Roofing get out of two penalty appeals are bruised shins and a drop ball.  "The most stonewall pen you'll ever see, that," says one of the crowd.  Ten minutes into the second half, Shankhouse get the leveller their effort deserves, prompting a flurry in which Roofing clang the post and the crossbar before Andy Appleby strolls the ball across the line with the home defence waiting for offside.  "Can't be off, lads," the linesman tuts.  "He was level."  Stephen Young smacks a third,  Shankhouse score a consolation and Appleby rolls home a fourth - his ninth in six pre-season games.  "Tired legs," Wilson says, "but you've done well."