It's cup weekend on Tyneside, but while big boys Killingworth Sporting, Shankhouse and Percy Main Amateurs are busy scrapping it out for a place in the third round of the Kicks Leisure Challenge Cup, Newcastle University AFC and Newcastle East End are playing league fixture catch-up in the perceptibly more mundane environs of the Northern Football Alliance Division One.

The £4,500 I've recently handed over in tuition fees doesn't get me so much as a garden chair to sit on at Cochrane Park. With trees along one half of the pitch, open fields on the other, and a crowd of just five people, my main concern as the game kicks off is to find a place to stand where I won't be expected to run and fetch the ball, eventually settling on a spot between a conifer tree and the corner flag. 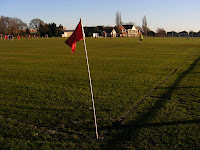 It's immediately apparent that East End (disappointingly, the only things they share with the club that made up one half of Newcastle United in December 1892 are the name and shirt colour) are the more talented of the two teams. Three of their players have turned out in gloves, four more are wearing long sleeves, and they occasionally manage to kick the ball in the general proximity of a teammate. Newcastle University - a student club run by students for students, their website says, as if there wasn't a big enough clue already in the name - were Northern Alliance Premier Champions in 2000, but start out fourth from bottom, having managed to play only five games all season. East End sit in midtable, seven points better off, though recent form doesn't count for much when you haven't played since November 6th.

The players are rusty, the pitch is wet, and the game soon takes on the sound and tenor of an inexpertly-managed sexual encounter. "On his...tighter! There's two of yuz, ye kna," screams a defender. "Tuck in", "Eyes" and "On yer back," cries the bench. Good foot in!" and "Stuck in Robbie," purrs East End's number 4. "Plenty of space up there," suggests the University keeper, "but you've got to want it." "Stand, Jeff" and "Talk to me," shrieks a voice in midfield. "Come on, we've got to hurry this up," cautions someone on the touchline. "Let's try and get the ball down." "Take your time," cajoles a defender. "Keep it up" and "Good shape," the away keeper encourages. "Push!" 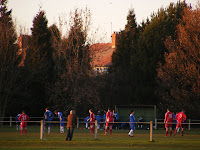 The game's first shot on goal drifts harmlessly over the University bar with thirty minutes gone. The students counter, and a forward rounds the keeper but scuffs his shot against a defender's knee. East End scrape an effort wide and miskick in front of goal. Then a University midfielder takes a pass on the edge of the area and casually slams the ball into the top corner of the net. His teammates break into applause. "And he just stood there like he does it every day," laughs one of the substitutes.

The home side grow in confidence after their goal and have the better of the second half. East End's keeper slaps a shot off the line while blinded by the sun, and as two of the five crowd members drift away the visitors' final chance of the game* pings back off the crossbar.

"I'll have to go inside, man," says a voice from the dugout. "If I stay here any longer me feet'll drop off."

* As it turns out, it wasn't quite their final chance, as they equalised in the last minute of the game, just as soon as I was out of sight.
Posted by Michael at 19:10