Almost two decades have elapsed since the boom and bust of Northallerton Town FC. Between 1992 and 1994 the North Yorkshire side blazed into the top six of the Northern League, the FA Trophy's last-16 and twice came within an away win of a place in the first round proper of the FA Cup. A crowd of 700 saw the visit of Farnborough Town; the Northern League Challenge Cup was sealed with a 2-0 win over Blyth Spartans. The trophy almost formed an epitaph to the club, the High Court winding it up over unpaid debts before its players had kicked another ball. Community support kept Town alive, but the Northern League's southern outpost has only seen four seasons of top-flight football since, the club more commonly having to content itself with less direct achievements such as the Dawson brothers moving to Nottingham Forest's youth teams and Darren Mowbray's elder sibling pulling Middlesbrough out of their post-relegation freefall. 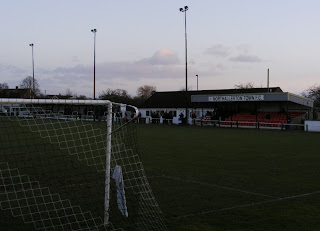 The Grand Central service to Kings Cross departs from an underground Metro platform in Sunderland.  A portrait of Marilyn Monroe smiles from the doorways, Cluedo and Chess boards are printed on table tops and there's even free wi-fi if you can ever get it to connect (I couldn't in either direction).  Two Mackem girls on a London weekender swig back lemonade and white wine - "Eeeh, it's 14% this, y'kna!" - as we clatter through the Billy Elliot towns of the East Durham coal belt: brownfield, red brick, plastic litter. Northallerton is the third stop, an hour down the line and the thirtieth leg of the Northern League Tour James Williams began in August last year. "Not a good start," he texts as he enters the Station Hotel to find the landlord dressed in red and white stripes and a Sunderland pennant hanging from the bar.  Romanby's Golden Lion is just across the train tracks, a log-effect fire and Copper Dragon beers accompanying a window view of the village green, while the Regency Stadium itself is a few minutes further down Ainderby Road, past a Co-op food store, a war memorial and a pitch now belonging to Northallerton Juniors FC.  A sign outside the turnstile promises 'Open Tonight: Food',  wooden picnic tables are dotted along the side terracing, and the remnants of a wedding party watch kick-off from the clubhouse bar. "Can you get the team to sign my programme?" asks the bride. 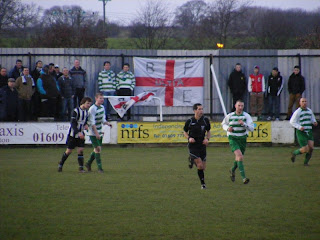 Birtley's travelling ultras have come in the back of a player's van, outnumbered eleven to two by an equally vocal cluster of Northallerton fans standing behind the opposite goal. " We love you Birtley, we do" at one end of the pitch, "'Allerton, 'Allerton, 'Allerton" at the other. Four defeats in their last five games have left the home side clinging to the promotion pack like a banker to a million-pound bonus, and the bridesmaids have barely finished their chips when keeper Stephen Craggs brings Dan Smith down as the Birtley player prepares to tap in on goal. Craig Marron whacks the penalty into the top-right hand corner of the net. "He dived, ref," grumbles one home fan. "Rubbish," says a second. "Almost snapped him in bloody two." 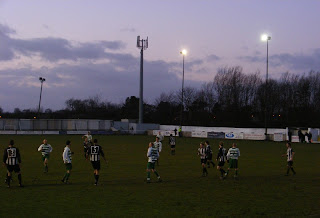 Nobody contests the equaliser, Dan Clayton carrying the ball unchallenged through midfield before picking his spot as confidently as Marron. The gusting wind helps beat Birtley backwards and sends us in the direction of the clubhouse window, where, pints in hand, we watch the away side make the first of three strikes on the crossbar and Colin Anderson give Northallerton a thoroughly merited half-time lead. The black and whites shade most of the second half, too, Birtley's attacks finding nothing but the woodwork or, more commonly, Craig Winter's head. With the giant defender exuding calm like his father does controversy the home side don't seem in much danger of relinquishing their lead until Marron crosses for Dan Hepplewhite to nod in a leveller with just two minutes left of the ninety. "How much longer, referee?" a Northallerton fan shouts across the pitch. Long enough for a James Allsopp free-kick to find the corner of the net after two stepovers and three minutes of time added on. "Defeat from the jaws of victory" is the headline on a Northallerton forum; Birtley, undefeated since November 26th, are threatening to become promotion candidates themselves. 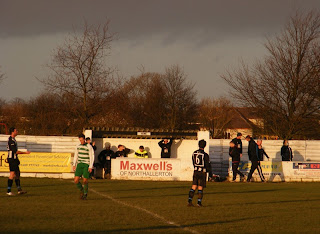