Place of the horse people, the Celts called Chester-le-Street. When the Romans arrived they kept the name and added a road, passing close to the fort of Concangis on its way from the Humber to the Tyne. The Anglo-Saxons knew the town as Conceastre, which turned into Chester and finally le-Street, probably around the same time that the first game of football was played in the town – the Upstreeters versus the Downstreeters every Shrove Tuesday, two hundred a side, five hours a match, and the winners decided by the position of the ball come 6pm. Miner’s son Colin Todd, a Brian Clough protégé who won two league titles and 27 England caps, was born in the town sixteen years after the last Shrovetide game was played, and future Manchester United and England captain Bryan Robson followed nine years later. What Chester-le-Street didn’t have was a football team of its own. 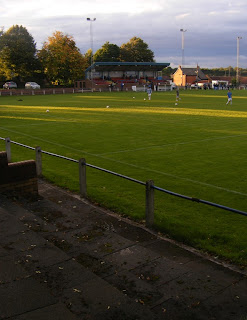 In 1972 Colin Todd won the First Division championship with Derby County, Bryan Robson signed professional forms with West Bromwich Albion and Chester-le-Street Garden Farm, founded in a pub and playing on a pitch in Low Fell, kicked off their first season in the Newcastle City Amateur League. Todd picked up a second title and the PFA Players’ Player of the Year award in 1975, the year Garden Farm switched to the Washington League. Three years later, Bryan Robson played in all but one of West Bromwich Albion’s 42 league games, Chester-le-Street changed their name to Town and moved up to the Wearside League. 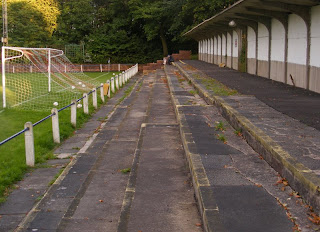 Town won the title in the year Robson moved to Manchester United, finished third and then second before their ground passed muster for the Northern League. In 1983-84 they won the division two title at the first attempt and joined Blyth Spartans, Whitby Town and Gretna in the top flight. Three times relegated and twice promoted, they spent twelve seasons in Division One before going down in 2010, Nathan Fisher’s 41 goals earning him a £3,000 move and a professional contract at Gateshead. He’s not the only ex-Cestrian to make the step up. Swansea City’s Danny Graham, Blackpool’s Chris Basham, young St Mirren keeper Adam McHugh and Kris Thackray, who’s turned out for five teams in Italy since leaving Newcastle United in 2008, are all graduates of Chester-le-Street Town Juniors. Set up in 1995, 61 players have moved from the Juniors to Town’s senior side, including members of the team which knocked Port Vale, Hartlepool and Derby County out of the 2004 FA Youth Cup on their way to a 2-0 fourth round defeat at West Ham United.

The Cestrians ended last season – their first in Division Two since 1998 – in eighth place, a massive twenty-three points off promotion. After ten years in charge, Stuart Sherwood stepped down in the close season, the club appointing Grant Crookes – Emmerdale extra, ex-Darlington and Hartlepool professional and West Allotment Celtic assistant manager – in his place. Unsurprisingly, Cookes’ hopes for this season rest on youth products such as centre forward Callum Patton and 19-year-old ex-Durham County midfielder Jonathan Evans. Birtley, thirteenth last year, suffered home defeats in their opening two games before beating Brandon and Northallerton Town by three goal margins. With one of the smallest budgets in the division, Scott Oliver has had to contend with a constantly changing squad, midfielder Andrew Barclay the latest to leave, this time for first division South Shields. 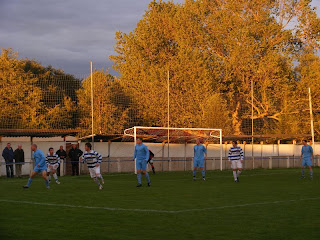 Chester-le-Street spent upwards of £100,000 bringing Moor Park up to Northern League standards. The results are still visible in the paved terracing behind one goal and the covered, all-seater stand with a glass box set aside optimistically for press. A PA splutters into life as the teams walk out of the tunnel.

Birtley have the bulk of the early possession, but with the grass long and the bounce more uneven than a fifth day Test wicket the sides struggle to keep hold of the ball long enough to threaten either goal. Chester test keeper Lenny French a couple of times, force a scrambled clearance and are just inches away from scoring when James Baxter slides wide from a Patton pull back. At the other end, Steven Telford and Dan Smart toil without reward, Birtley’s midfield leaving too much space front and behind, and Town keeper Kyle Barlow as much a spectator as those queuing for food at the Northern League’s number one burger van. 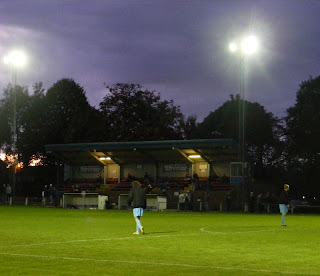 Things change dramatically soon after half-time. Telford opens the scoring with his team’s first on target effort, following up a shot which comes back off the post. Before Crookes or his layers can react, Andy McIntosh slams in a rebound from a blocked free kick. Smart goes close to extending the lead – dragging a shot across goal and failing to lob Barlow from the edge of the box – before Sam Renwick coverts a Baxter cross with a backheel flick at the near post. Chester-le-Street push three men up front, but their two best chances are squandered in injury time and Birtley hold on for their third win in a row.