"Who are these we're playing, like? Anyone kna owt about 'em?" asked one of the 12 Jarrow Roofing fans waiting in a social club carpark for their club's first game of the new season.  "Wembley warriors," someone joked as the travelling squad packed their holdalls into the boot of the coach.  "You still eating nowt but celery?" a teammate asked Lee Kerr, a scorer in three successive Wembley finals for Whitley Bay. "Will we be stopping off on the way back?" a player shouted from the back.  "It's just I forgot to bring any bait." 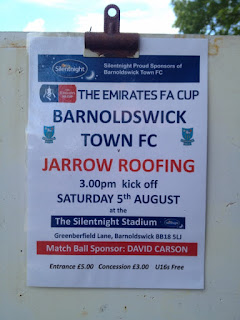 The bus had leaflets for trips to Berlin and Great War battlefields but today we were bound for Barnoldswick Town and an extra-preliminary round tie in the 2017-18 FA Cup. "Two and a bit hours," a supporter announced, "according to my phone." Joint managers Richie McLoughlin and Mark Collingwood huddled at the front scribbling their formation in a notebook.  "They've already put their team on their website as a 4-3-2-1," McLoughlin said.  "Red herring," thought first-team coach Mick Mulhern, who trained half a dozen of the current England women's squad during 15 years in charge at Sunderland Ladies.  "They started that way when I saw them but they finished up 3-2-3-2."  Richie's wife Janice collected lottery subs and the bus money.  "Are you doing Twitter today?" she asked the student from Sunderland University doing work experience with the club. 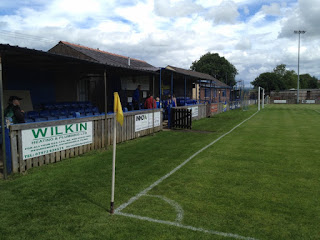 Barnoldswick had gone big on their ninth appearance in the world's oldest football tournament. A replica FA Cup had pride of place on their clubhouse bar and balloons in the shape of the Champions League trophy had been tied to half the tables.  The pie and mushy peas was served with proper cutlery and china bowls from a hatch in the corner and the toilet block outside had a choice of soap, hand sanitiser or waterproof suncream.  "Bit posh this," a Roofing fan marvelled, "but I divvent think the factor 30 would do much to clean yer hands."  The home side had never before won a game in the competition; Roofing had once played at Fleetwood Town and twice made it as far as the second round of qualifying. "It's winnable," a Roofing fan concluded, looking at the line-ups stuck neatly to a wall.  "But at this stage of the season you never know what you're going to get." 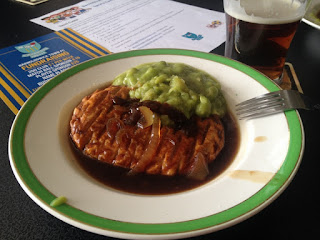 The first 20 minutes promised an even contest, Dennis Knight, once of Newcastle United, reacting first when his free kick rebounded back from the wall to put Roofing ahead, but the home side responded swiftly, turning the score around with two goals in four minutes just after the half hour.  "Too many slack balls," a Roofing fan bemoaned. "We gave the game away," Kerr rued later.  You could hear the raised voices in the visitors dressing room at half-time.  "I've told him to calm down," Janice McLoughlin said, cocking her head towards the door. 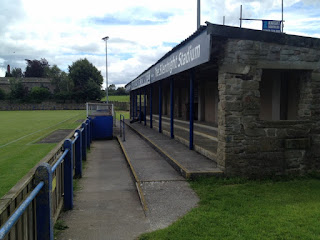 "Get the ball down, use your heads and play," McLoughlin urged his side in the minutes after half-time.  "Got to make this pressure tell," a Barnoldswick fan muttered, the referee's whistle sounding almost simultaneously for a penalty kick.  "I didn't know whether it was in or out of the box," Roofing keeper Shaun Newbrook reckoned back on the bus. "Definitely in," said Mulhern, who'd been watching from a gantry above the dugouts. "Wouldn't have made a difference," thought a despondent McLoughlin.  "The better team won on the day." 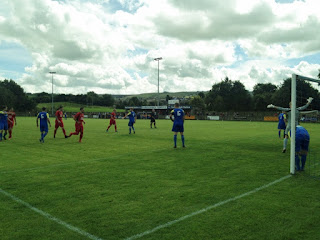 Two goals behind,  Roofing threw giant centre-back Dan Kirkup up alongside Knight but couldn't find a route past Connor King, an England schoolboy international signed on loan from Burnley's under-23s. The home side eased to victory, their first ever in the FA Cup. "They were lively in the first 10 minutes," lamented former Northern League chairman Mike Amos as he looped around the pitch.  "History makers," tweeted the Barnoldswick account. For the victors, a preliminary round meeting with Northern League Dunston UTS.  The losers made do with post-match pints, a sausage sandwich from the clubhouse and a whip-round for the driver on the journey back home.

"You hoped it couldn't get any worse," a Bangor fan remembered of his club's long descent down the league.  "But it did."  Relegated once on the pitch and twice off it, the Super Seasiders plummeted three divisions from the Northern Irish Premiership to the Ballymena & Provincial District Football League. "It took a while to sink in. Unimaginable. But maybe the shock was what the club needed." 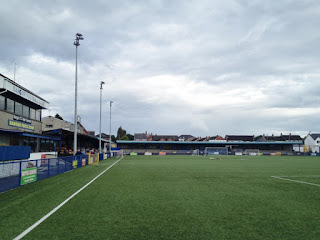 Whatever else it was, dropping out of the Football League formed the catalyst for change elsewhere. "Season ticket sales are up, matches and balls sponsored, Friends of Bangor scheme in full flow,  new management team, clean up days organised, new website and fans returning in numbers," one forum poster celebrated after five new directors took control at Clandeboye Park.  "Bangor is the biggest club I've managed," incoming manager Hugh Sinclair told the club's website.  "We have the same vision for Bangor as we did when we set up the Supporters' Steering Group," pledged the new chairman.  "We want to take the club into the Premiership within five years and ensure Bangor FC is a community based club. We want to move forward in an open and transparent manner." 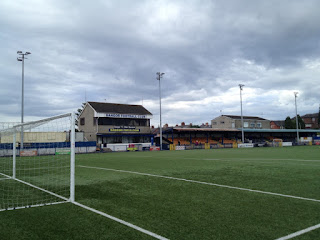 Half an hour from Belfast Central, Bangor was the end of the line.  "Straight down for Eisenhower Pier," the conductor told a couple of elderly Americans as the first of the day's showers blew in off the Irish Sea.  There was a single fisherman on the concrete, facing inland with his back to a mural of Eishenhower's send off to the fleet in Bangor Bay.  "From here we started the long, hard march to Allied victory," he told cheering crowds in Belfast the following year. Two walkers with golf umbrellas hurried by along the North Down Coastal Path, and a group of kids kicked a football between puddles in a car park nearby.  Bangor once produced players like Gerry Armstrong, Terry Neill, Steve Morrow and the effervescent Tommy Casey, an FA Cup winner with Newcastle United and a man "whose tackles called to mind a speeding bulldozer". "We got into the UEFA Cup one year and the Cup Winners' Cup another two," the fan told me later.  "Finished second in the league and won the Irish Cup and League Cup in the same season. We've been sinking for years, but things feel a lot brighter now." 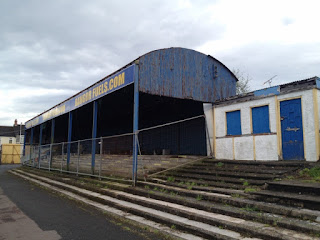 The quarter hour walk from the train and bus station took in a kebab shop called Doner Trump and the site of the sixth century Bangor Abbey - smashed up by the Vikings in the town's first brush with continental opposition - before cutting up Church Street past a gospel hall and a house-end mural of a cow keeping goal.  There was a wooden table at the entrance and a gloriously quirky ground inside, almost every corner a new and unexpected delight.  The TV gantry was made of planks of wood and scaffolding poles, a stepladder strapped to one side with bits of rope.  Plastic office seats were scattered inside the dugouts and the main stand had four armchairs in the middle of the disabled section.  The curved terrace at the Clandeboye Road end was a reminder of the ground's former use as a go-kart track.  On one side there was a corrugated structure with holes in the roof and a fence tacked to the front to keep spectators out.  On the other, the club shop was in a portakabin between the grandstand and the toilet blocks, whose only sign of opulence was the bar of Imperial Leather stuck on the side of the sink.  A note on the door gave prices for club mugs and bar scarves. Season tickets, sponsored by a fish and chip shop, were just £70. 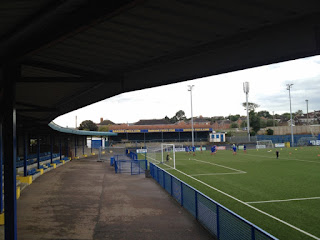 Sinclair's new-look side had put six goals past Groomsport, seen off Lower Shankill and Crumlin Star and lost 4-0 to Premiership champions Linfield.  Their fifth pre-season opponents, Albert Foundry, were another fourth-tier club, the two matched tackle for tackle and error for error in a full-blooded opening half.  Bangor took the lead half an hour in, the returning Johnny Bowers, the closest thing the Ballymena & Provincial District will see to a genuine trequartista this season, swinging a free kick in from the corner flag that clattered back off the post and past the keeper's flailing hand.  Seven minutes later, Marcus Beattie bundled in a leveller after Foundry broke clear down the left.  The bloke in the next seat sucked air through his teeth while two travelling fans in bobble hats clapped enthusiastically down below. 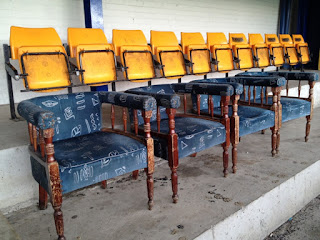 The second half was evenly matched but largely uneventful. An unwilling Foundry coach tucked a linesman's flag under his arm, while another ran back to the changing rooms to fetch a substitute a pair of shorts and the right colour socks. The lights came on a lamp at a time. Bangor grazed the crossbar but the game played out at pre-season pace. "Decent workout," the fan next to me reckoned, "but none of this counts for anything if we don't get promoted this year." 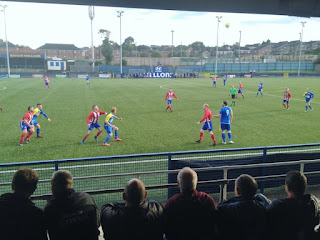