The journey begins with Bedlington Mechanics in 1949, taking in a Northumberland Minor Cup, promotion to the Northern Alliance, two championship trophies and four league cups, a home ground at West Sleekburn ‘A’ Pit, twelve months in the Tyneside Amateur League, four changes of suffix and a three year hiatus while the club was disbanded and reformed. And that was just before 1982. 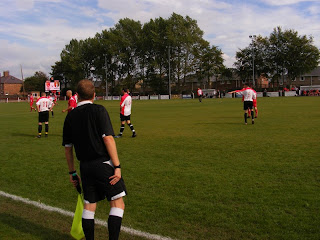 The mid-1980s had seen Bedlington earn back-to-back promotions and finish runners-up to Bishop Auckland in the top division of the Northern League. The mid-1990s saw them stuck at the bottom of Division Two, out of cash and with the gates of Welfare Park shut on environmental health grounds. Enter the Perry brothers, Keith and Dave, local businessmen whose impact on Bedlington was like that of Abramovich and Mourinho combined. With Keith Perry and ex-Mansfield Town player Tony Lowery in the dugout, the Terriers won five successive Northern League titles, two Northumberland Senior Cups, reached an FA Vase final at Wembley Stadium and played in the second round proper of the FA Cup, losing at Scunthorpe after Second Division Colchester United taken apart 4-1 in front of more than 1,500 fans at the Dr Pit Welfare Park. Both men left in the summer of 2006, part of a chain of events which saw Bedlington teetering on the brink of extinction. Dave Holmes kept the club afloat off the pitch, while the combined efforts of Perry, Lowery and Newcastle Blue Star – whose promotion meant only two clubs went down – were enough to stave off fears of a first relegation since 1987. Set against all that, hearing that one of the world’s five hundred richest men wants to sponsor your shirts, buy you an electronic scoreboard and fly the team out to Buffalo to play for the Lord Bedlington Cup seems almost run of the mill. 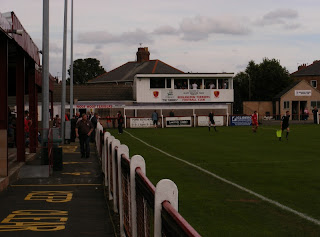 Even without the North American tour it’s been a typically eventful start to the season. Buoyed by an impressive signing spree which saw Spennymoor’s free scoring Steven Richardson and former Newcastle United and Queen of the South midfielder Tommy English join the club, the Terriers were touted by some as an outside bet for the title after a 4-2 opening day win over South Shields. Single-goal defeats to Billingham Synthonia, Shildon and Newton Aycliffe have alternated with a 4-1 win at Ashington, a 6-0 FA Cup victory over Billingham Town and a 15-0 trouncing of Stokesley Sports Club, who just happen to be the visitors today.

The lure of goals, the FA Vase and Bedlington's brand new scoreboard tempts Chris Smith and James Williams along, Chris breaking off from Twitter long enough to direct us to the ground. We arrive in Bedlington with half an hour to kick off, park up behind the ugliest Tesco supermarket in the whole of the British Isles, circumnavigate a bowling green while attempting to track down the stadium entrance, and are already through the turnstile when we realise we’ve gone straight past the door for the bar. It’s still a better start than the visiting team make, going 1-0 down after just two minutes when Anthony Shandran scores his thirteenth goal of the season and his seventh against Stokesley alone. 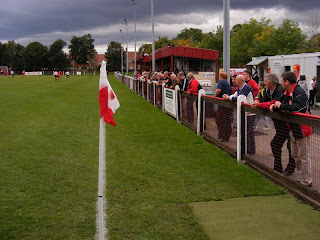 Having lost their secretary, manager and all thirty-eight members of their playing squad over the summer, Stokesley are relying on players who spent last season two or three levels below Northern League Division One. The gulf is obvious, Bedlington faster to the ball and sharper in possession as Shandran adds a second with barely twenty minutes played, the fiftieth goal Stokesley have conceded in just over eight games. Nathan Porritt – whose agent was offered £150,000 to take him from Middlesbrough to Chelsea as a 15-year-old schoolboy - pulls a goal back with a stunning finish from the edge of the box, but it’s 4-1 by half time, Shandran’s name appearing twice more on the £30,000 scoreboard Robert Rich donated to the club. Porritt, still just 21, and Joe Melvin, a summer signing from the Teesside League, the star turns in a hardworking but utterly outclassed Stokesley eleven. 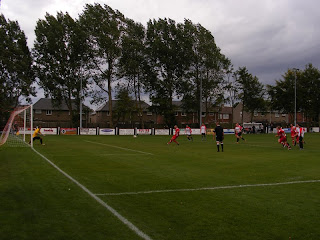 Stokesley change goalkeepers at half time, the PA announcer apologising for not knowing the name of “the player in the yellow shirt”. Whoever he was, he won’t want to meet Anthony Shandran anytime soon, the ex-Burnley, St Patrick’s Athletic and York City striker laying on goals for Tommy English, Paul Swithenbank and Ian Graham while still finding time to score his fifth and sixth of the afternoon. Bedlington go though to play Northallerton Town in the second round. Inconsistent in the league, you wouldn’t bet against them reaching at least another quarter-final in the Vase. 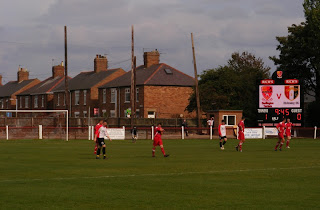