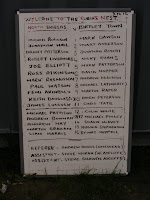 Twelve times Northumberland Senior Cup winners, Northern League and FA Amateur Cup champions in 1969, joint holders, with Almas Roma, of the European Amateur Cup, twice in the FA Cup Second Round, Northern Counties East runners-up two times and champions, by twenty-four points, in 1992. But history didn't count for anything when North Shields ran out of cash. Their ground was sold for housing, the playing staff released, and the reformed club played their games on council pitches in the second division of the Wearside League. 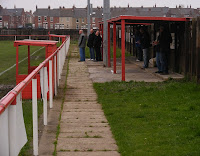 It's a long way back from there, but North Shields are slowly making strides. Fourth in Northern League Division Two, their new ground, the Daren Persson Stadium, has recently been sponsored by a local firm of funeral directors. It's a decent place to watch football but no Appleby Park (the old stadium had a 15,000 capacity and "dressing rooms of Football League standard"): weeds, wooden fencing and paving stones surrounding the pitch and a metal portakabin, decorated with pennants and old team shots, housing a tea hut. Cover is provided by a stand named after a shopping centre that has wooden bench seats on brick supports, and a pair of red-roofed standing areas in the shape of rural bus stops. The Red Ultras stand on a terraced bank hacked out of the weeds, their flags tied to the top of a metal fence.

Nothing much happens in the opening forty minutes. Birtley, whose last five games have seen thirty-three goals, play with one up front, one on halfway, and everyone else back. Their keeper makes a double save with his feet and a free header's steered straight into his chest. Birtley have a goal disallowed for offside and put a free kick into a housing estate that has a CCTV camera mounted on a streetlight, protected by a cage. 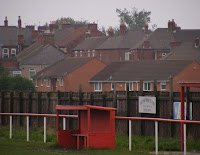 It's almost half-time when North Shields go one-nil up. Danny Patterson slips past two tackles on the left and loops the ball into the centre. James Luccock plants both feet, bends forward at the waist and heads straight and low past the keeper's left hand. "Same old Luccock, always scoring," sing the Ultras. Birtley attack, float a corner kick over the goalkeeper's head, and Martin Roper stabs in the equaliser at the far post. "Not much of a game, is it?" I overhear at half-time. "Aye, I thought one goal was going to settle it."

Birtley take the lead, the North Shields bench abuse the referee and bring on their substitutes, and Graham Fenton, who I last saw scoring two late goals to wreck Newcastle's title challenge in April '96, starts screaming instructions from the sidelines. A header squirms wide, a cross spins over, a shot slams against a hoarding. The equaliser comes with a minute left and the crowd edging towards the only exit: a shot smacks a Birtley defender's hand and the penalty's calmly rolled into the net by substitute Michael Pattison, the grey-shirted North Shields keeper chasing in for the rebound. 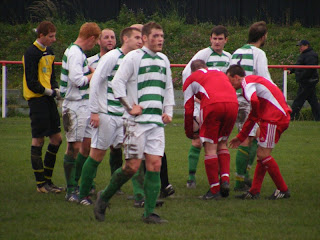 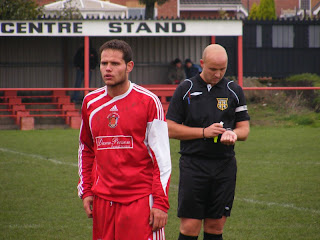 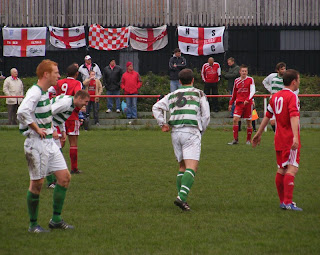 The Red Ultras
Posted by Michael at 19:05