What happened next was a labour of love. As the club grew, Houghton leased a derelict plot of land from Gateshead Council, levelled a pitch and found some steel containers to use as changing rooms. When the players needed better facilities, he took a bricklaying course and helped to build them himself. Without external funding, volunteers trained the players, washed the kits, put up the goalposts and marked out the pitch. Cash from the Football Foundation enabled a proper clubhouse to be built, the club expanded to more than twenty-five teams, gained an FA Charter Standard award and helped produce Danny Graham, a £3.5 million signing for Swansea City this summer, and Christie Elliott, who recently moved from Whitley Bay to Partick Thistle. In 2009 a senior men’s team, Gateshead Leam Rangers, was formed, playing against the likes of Wheatley Hill Working Men’s Club, Brandon British Legion and Durham Garden House in the Durham Alliance League. After finishing sixth last season they successfully applied for membership of the Wearside League, one promotion away from the oldest grassroots football league in the world. 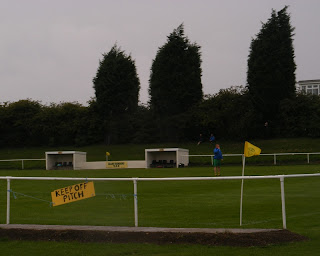 I’ve already seen Rangers play this season, their 1-0 win at Coxhoe Athletic one of three so far in the league. The visitors to the Hilltop Playing Fields are Peterlee Town, a one-time Northern League club and newcomers to the Wearside League themselves after five seasons in the Northern Alliance. Climbing the hill from Heworth Golf Club, there’s a Leam Rangers sign on the perimeter fence and the club’s name written across the metal entrance gates. Houghton collects the £2 entry as we pull into the car park. The pitch is railed off with hard standing newly laid along both sides and overhead power lines along the touchline nearest the clubhouse bar. 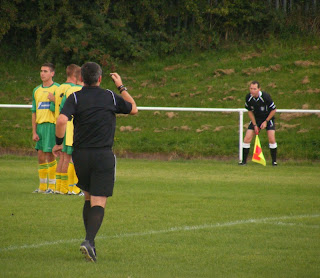 Non-League Day attracts a crowd of forty people, including several who’ve made the journey from Peterlee. The game’s played at a brisk pace and both sides have their chances before David Laight runs on to a bouncing ball in the twenty-fifth minute, sidefooting past keeper Dean Saunders to give the visitors the lead. The second goal comes five minutes before half time, a shot ricocheting around the goalmouth before Laight toes home at the second attempt as Saunders tries to get his hands on the ball. 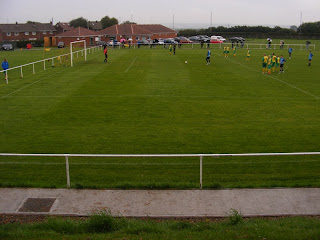 The second half is every bit as eventful. Lee Turnbull – who’d earlier clipped the top of crossbar – smashes a penalty into the roof of the net on forty-seven minutes and the home side clatter the woodwork soon after. A players from each side is sent off, Saunders saves two penalties – the second denying Laight his hat-trick – a Rangers player is taken to hospital with a shoulder injury and Peterlee score a late third goal, their number seven breaking upfield and passing the ball into the corner of the net. At the final whistle the Rangers team untie the nets, collect up the corner flags and carry the goalposts back to the storage hut that Houghton helped build. It's an image which sums up a hugely impressive football club.