What could be better than football and beer? Only a Saturday train ride from Newcastle to Carlisle taking in almost fifty of the finest real ale pubs in Cumbria and Northumberland and ninety minutes of action in the world's second oldest football league. A simple plan until we made it to the centre of Britain, when it unravelled faster than Liverpool's defence of Luis Suarez. 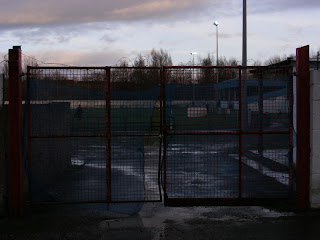 It's eighteen minutes past opening time but the first pub on our list is shut for another hour. While the lights are on in the place next door, we're left staring at Sky Sports News and beer pumps until the barman eventually ambles in. "We don't usually allow food in here, you know," he growls as James tucks in to a minced beef pie and Carling Extra Cold. "It's my breakfast, sorry."* "I don't care what it is," he snaps, which is exactly the kind of response you should expect for ordering a pint of fizzy in a pub that sells real ale.

Back on the train the football traffic is all for Carlisle United's home game with Orient. We take a right outside the station, give a crowded Wetherspoons and what I'm fairly certain is the worst pub in the world a miss, sink two pints of Jennings and a Newcastle Brown Ale in the Woodrow Wilson, then walk twenty-five minutes to the ground in pouring rain (or, as the BBC calls it, "Dry with sunny periods."). A concrete track along the West Coast Main Line brings us to the Gillford Park Stadium and a British Rail social club whose only occupant is a barmaid with her feet up in front of the darts. 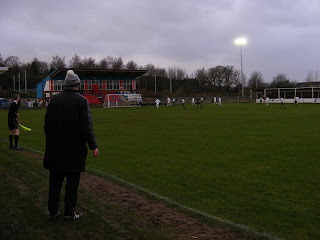 There's a very good reason why. In 2005 just seven men - including co-founders Mike Linden, Geoff Andrews and Steve Skinner, a  former first-team midfielder at both Gretna and Carlisle - turned out for Gillford Park's first training session.  Within four years they'd progressed through the three divisions of the Northern Football Alliance; another twelve months and the Northern League's youngest club sat midtable in Division Two and had qualified for the extra-preliminary round of the FA Cup.  With a 25-year lease on a ground capable of holding 4,000 spectators and new Conference-standard floodlights installed, the management team of Skinner and Stuart Bell should have spent the summer laying plans for another promotion bid. Instead, rumours that landlords the Carlisle and District Railway Club had been seeking more lucrative tenants were accompanied by a sudden raft of health and safety issues which saw the team locked out of the stadium and forced to play their opening nineteen games of the season away from home. An interim injunction finally allowed the visit of Crook Town in the first week of March, but court proceedings are still ongoing with a final hearing not expected for another four months. "At least they should finish the season," the football club's legal adviser Richard Bloomfield told the Christmas 2011 edition of the magazine Northern Ventures Northern Gains. 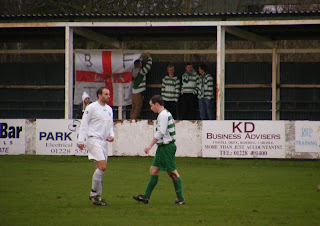 On the pitch, at least, events have reverted to plan, Gillford currently four points off the Division Two promotion places with up to six games in hand on the teams above them.  Birtley Town have been almost equally troubled in recent seasons but sit a point ahead of the home side in sixth under the astute management of Scott Oliver, Barry Fleming and Paul Brown, their squad of promising young players - including 17-goal top scorer Dan Smart - supplemented by experienced heads such as former Esh Winning and Ryton midfielder Craig Marron.

Smart doesn't make the journey but Andy manages a head count of forty spectators including five Birtley Ultras who've turned up by car. "Nothing much to shout about this half," one says at the end of a forty-five minutes in which Gillford Park could justifiably have been three or four goals ahead. Somehow the scores are level, an early Ryan Errington goal - "Three yards offside" think Birtley's bench - cancelled out when John Martin's sliding effort just about crosses the line. "Just let it go, lads. It's gone now," says Gillford's keeper. "You can't tell me that was in," his manager tells the referee as the teams walk off for half time. 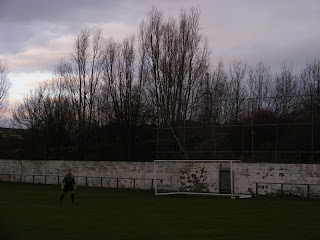 Martin scores again with the first attack of the second half, and when an attempted clearance strikes the underside of Reece Darwent's boot Birtley's ultras are doing a four-man Poznan and their side are 3-1 ahead. David Wallace heads Gillford back into the game on the hour, then three goals in little more than a minute see equalisers from Mike Reed and Marc Shiel, Dan Smith's big toe giving Birtley the briefest of leads. "We're too susceptible to crosses so you've got to stop them coming in," Fleming says as Shiel volleys in his 17th league goal of the season. "We love you Birtley, we do" and "Scotty Oliver's green and white army" the ultras sing, before asking "What's it like to hear a crowd?" 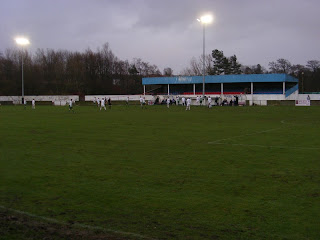 Straight out when the whistle blows, we scramble aboard the 5.28 from Carlisle, getting off at Haydon Bridge to find a pub with darkened windows and another next door where the conversation veers between the migratory patterns of fish in the Falkland Islands to Nicolas Anelka's wages at crack Chinese outfit 'Shanghai Rovers'.  "Four hundred thousand a week that Shanghai Rovers are paying Drogba and Nico whatchamacallit. That's about twenty million a year." "Aye, we'd all take the same though, wouldn't we?" "I divvent kna, they don't mess around. I saw on the telly they hung 330 people in a week. One mistake there and you're gone."  The last stop is Corbridge, where Paddy McGuinness' face leers out of a TV screen and a private party in the back room are wrapping each other in toilet roll to make snowmen.  "Pint of Deuchars, please...actually, you'd better make that two." 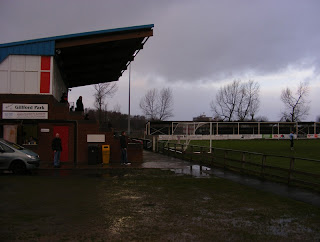 * He's from Durham. It's absolutely normal.