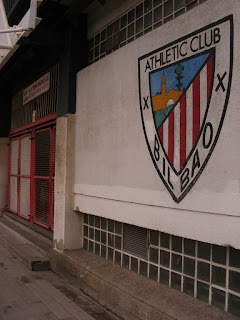 From the seven streets which made up Don Diego López de Haro's original walled settlement, numbers have always mattered in Bilbao. 3/5/1894, for instance, the date of the city's first recorded football game, the Nervión reporting a 6-0 win for a team of expatriate British industrial workers against eleven Basques who'd picked up the sport while studying in England.  Or thirty-one, the number of major trophies Bilbao's football team has won since some of the losing players helped found Athletic Club four years later - the last a league and cup double notoriously sealed amid a 1984 street fight in the Santiago Bernabéu. There's zero for the number of seasons Spain's fourth most successful club has spent outside La Liga since the inception of a national league in 1929. Zero, too, for the non-Basques in Athletic's line-up since names like Martyn Veitch and Alejandro Smith featured in the team that defeated Espanyol in the 1911 final of the Copa del Rey. True, the Basque-only policy has been more generously applied in recent years, but 76% of  the respondents to an El Mundo poll declared they'd still rather see the club relegated than ever break it entirely. Con cantera y aficion, no hace falta importacion (with home-grown talent and local support, you don't need foreigners), as the popular saying goes.  The final number is of more personal relevance: 18, the years I've been waiting to see Bilbao since Newcastle United played there in November 1994. 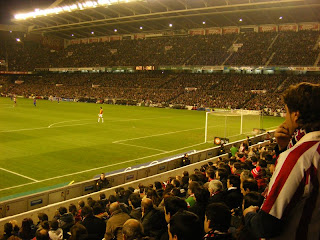 Inside the old San Mames 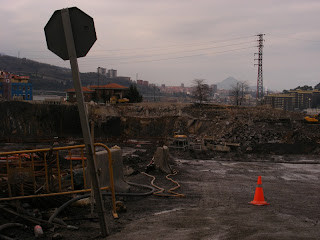 Cross the road and you're outside the new (due to open in August 2014).

"The Geordies' UEFA Cup visit is legendary in the city," FourFourTwo wrote eleven years later.  "Athletic fans recall in almost reverential tones the huge quantity of drink they shared with their visitors." "You couldn't buy a drink in the end," my dad remembers. "The Bilbao fans kept passing round these big plastic bottles of wine." "I was only four or five," says Athletic fan Miguel Arechavala. "but I remember looking out of my balcony and seeing Athletic and Newcastle fans holding a big Newcastle flag. It was going up and down the street; there were people everywhere." "Newcastle?" laugh three middle-aged supporters, making glugging gestures with their hands and throats. "This is a very famous game for us." A precipitant Mexican wave and a Jose Angel Ziganda goal eventually undid Kevin Keegan's side. Typically, it would be the only European trip I missed out on in the four years that separated the 5-0 defeat of Royal Antwerp from a Cup Winners' Cup loss at Partizan Belgrade. Now, as Athletic prepare to move into a a new 55,500 capacity stadium, time is finally running out at the San Mamés, the club's home since 1913 and one of the earliest purpose-built grounds in Spain. 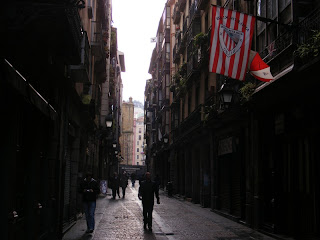 Matchday in the Old Town

It's half past five on Saturday evening when La Catedral's  gated ticket windows finally snap open. Ahead of us in the queue are Dominic, an Australian Celtic supporter, and a Fulham fan from Italy who refuses to pay €36 for a seat behind the goal. Football tickets aren't the only things that end up costing more than we expected: the average price of  una caña (or "baby beer" if you're English) in the Casco Viejo bars is €2. Tapas comes extra. Despite the high prices, in footballing terms Bilbao is one of the best value destinations in Spain, with virtually every bar in the city displaying its allegiance to Athletic and the plethora of clubs within easy reach of the Metro network - including Arenas Club de Getxo, Copa del Rey winners in 1919 and one of the ten founding members of La Liga - making it possible to take in five or six matches over the course of a typical weekend. 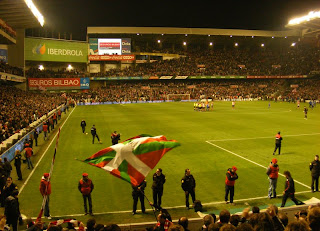 Matchday sees red and white flags draped above doorways, signalling socio drinking haunts and bars that are televising the game. The giant Athletic badge on the side of the San Mames is a constant beacon as we move among the half-empty bars on Licenciado Poza, where Newcastle and Bilbao fans thronged in 1994. "It's quiet today," says Jamie Rae, a St Johnstone supporter whose affection for red and white stripes began when he adopted Sunderland as his English team, "but it's much busier for Saturday games." Things don't begin to get crowded until we're inside the stadium itself, squeezing onto a step behind the goal the home side are attacking as the Himno Athletic Club de Bilbao formally announces the entrance of the teams. 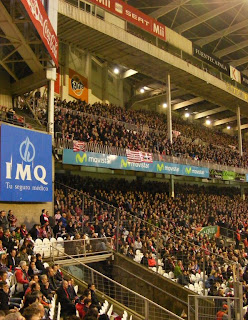 The ninety minutes that follow are unexpectedly one-sided, Levante unable to find an answer to Athletic's direct attacking style. A tenth-minute corner finds Fernando Amorebiete's head to give Bilbao the lead, and with Levante's midfield in retreat José Barkero and Arouna Koné are left to forage up front on their own.  Koné's shot into the side netting betrays the presence of four or five away fans, a handful of confetti blowing forlornly across the pitch, but when right-midfielder Óscar de Marcos - "Bielsa was playing him left-back until he decided the left-back was good enough to play there himself,"  Jamie tells us - shimmies past Javier Farinós, Fernando Llorente nods in the resulting cross and the game is over as a contest with five minutes of the half still to play. The home fans respond to each goal with cries of "Athletic! Athletic!",  the middle vowel as long as the gaps in the centre of Levante's defence.  Two-nil up, Bilbao drop the pace, Gaizka Toquero charging round the pitch to roars of acclaim from the crowd after replacing Llorente. In the 90th minute another substitute, the former Liverpool junior Mikel San José, heads a third from a corner after Levante's Juanfran is sent off for picking up a second yellow card.  For a neutral, the only slight disappointment is the San Mames atmosphere, which, despite the noise that greets each goal, more often feels as sanitised as the big grounds of the English Premier League. "I won't lie to you," says Miguel, "the noise today was normal. Of course, it's different when we play Real Madrid."

Arthur Pentland and the Founding of Athletic Club Bilbao

Bilbao fans readily acknowledge and celebrate the English influence on their club, but the story that Athletic were founded by a County Durham shipyard worker who based the red and white strips on Sunderland AFC seems to rest on one or two British newspaper references, notably this 2004 example from the pages of The Daily Telegraph:

Like many of his colleagues, a 19th Century stevedore called Arthur Pentland did a shipbuilding stint in Bilbao. In between thumping home rivets, Arthur co-founded Athletic Bilbao and ordered their costumes. The Basques not only played in a replica red-and-white-striped kit, but loaned a spare set of vests to the emerging Atletico Madrid.

Athletic's own records, as summarised here, contain no reference to a "19th century stevedore" and the only other printed record of the name I've been able to find is a 1969 article from the archives of El Mundo Deportivo which mentions "the greatest successes of the club forty years ago under the direction of Arthur Pentland". Athletic did win a pair of La Liga titles and five domestic cups in the 1920s and 1930s under the guidance of an English coach, but  Fred Pentland was born in Wolverhampton  and was playing junior football in Birmingham at the time 'Arthur' was "thumping home rivets" in the Bilbao dockyards. Workers from the banks of the Wear and Solent may have taken part in the 1894 game, and British expatriates had a hand in the formation of one of the clubs which eventually became the modern Athletic Club Bilbao, but in the absence of any solid evidence to the contrary 'Arthur Pentland' himself appears to be no more than historical invention, an English journalist mixing up the story of 1894 with a surname borrowed from thirty years later. In any case, by 2007 the same writer was attributing the club's origins to nameless "British workers who left Sunderland and Southampton to work in the city's steel and shipbuilding industries", while Sunderland fans have themselves debunked the Pentland story here. 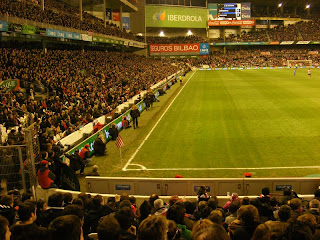 As for the costumes, Athletic played in blue and white halves until at least 1910, seven years after "the emerging Atletico Madrid" were founded as as a youth branch of the Bilbao team by Basque students in the capital.  A more prosaic explanation for the two clubs switching to red and white stripes in 1911 is that the material was simply cheaper to buy, though one competing theory is of a Madrid director (or sometimes Basque student) being sent  on a shopping trip for Blackburn shirts and returning home from London with Southampton ones instead.  Whatever the truth, ascribing the origins of Athletic Club Bilbao to either Sunderland or Southampton remains an exercise in wishful thinking rather than historical fact.
Posted by Michael at 18:16