When the sports writer Arthur Appleton called the north-east corner of England "a hotbed of soccer" he had in mind places like the colliery town of Ashington, birthplace of Jackie Milburn and the Charlton brothers, and Tow Law, whose iron was made into cannonballs for the Crimea, and where Chris Waddle and Steve Howard once turned out for the local football team.

The production line has slowed but it hasn't stopped altogether. Jonny Godsmark, released by Newcastle United but chased by several lower league clubs before he opted to sign for his hometown team, starts wide in midfield for Ashington. Switching wings, spinning and speeding his way past three players, his early cross hits a forward's knee and is clutched two-handed on the line by the scrambling Tow Law keeper. 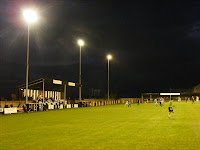 Ashington's pace and movement is too much for the home team. A few minutes later Godsmark sprints past a static centre-half and is clumsily brought down from behind as he races into the box. The keeper guesses left, the ball goes right. Tow Law, who went into the game on the back of five straight wins, already look a beaten side.

"Howay lads, should be out of sight now," shouts an Ashington fan as another shot spins narrowly wide. "Away! Away!" yells the keeper. A corner's deflected over the bar. "It's every time they attack this, man," mutters a defender. No-one is surprised by the second goal: the keeper calls too late for a cross, a defender miscues his clearance, and an Ashington midfielder gleefully sweeps the ball into the bottom corner of the net. Godsmark bursts through the defence twice more but shoots tamely at the keeper. Tow Law's only chance is a long-range shot that the Ashington goalie gathers at the second try. 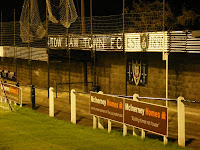 At half-time we take a proper look at the ground. The pitch slopes right to left towards the covered main stand, painted black and white with three posts holding up the roof and the barren Pennine hills behind. There's open terracing and a wind turbine along the length of the opposite touchline, and a covered standing area behind the far goal with 'Tow Law Town Est 1890' written across the corrugated iron overhang. "It's just like Shildon again," I hear someone shout from the changing rooms. The queue of people at the brick tea hut make their way onto the small terrace at the end Tow Law are attacking. "Beautiful night," a home fan tells me. "It's what Tuesdays were made for." 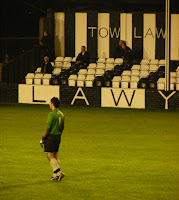 Those raised voices in the Tow Law changing room bring an immediate response. The home team press forward, trying to bludgeon a way through the Ashington defence. The away side are happy to sit back, but Tow Law can't take their chances and it's the last minute when they finally score. An Ashington attack breaks down and a punt upfield finds the unmarked Scott Thompson, who controls the ball and curves it around the oncoming goalkeeper.

It's the last chance either side gets.