Nine dollars and two and a half hours is all it takes for the train ride to Transnistria, a self-proclaimed sliver of a state between the western border of Ukraine and the rest of what once made up the Moldavian Soviet Socialist Republic. Only officially recognised by its three fellow breakaway republics of South Ossetia, Abkhazia and Nagorno-Karabakh, Transnistria effectively won its independence in July 1992 when the Russian 14th Army's artillery backed by high-level political pressure from Moscow forced the Moldovans to sign a ceasefire agreement. More than two decades later, Lenin statues, Russian soldiers and Soviet paraphenalia still abound in Tiraspol, capital city of a country reputed to have the biggest stockpile of illegal weapons anywhere in Europe and which attracts fewer Western visitors than even North Korea. "Two things are responsible for the creation of Transnistria: the dissolution of the Soviet Union and the script of Apocalypse Now," explains the Russian writer Vladimir Kaminer. 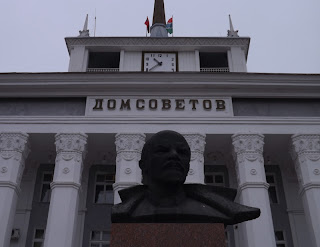 It's a reputation which explains why I'm travelling in a carriage with only two other passengers as the Odessa to Chisinau service trundles out of Ukraine.  "Passport?" the conductor asks in gravelly Russian. "Looks Irish," he mumbles, turning it over in his hand before returning with an English-language immigration form. Ukrainian border guards stamp us out of the country while Transnistrian police officers and Alsatian sniffer dogs watch in the background.   After a twenty-minute wait the train starts moving.  Half an hour later I'm climbing down the metal steps at Tiraspol to find locked or deserted rooms and two taxi drivers who shrug their shoulders when I show them the address of my hotel.  I set off down Lenin Street, take a left at a decrepit stadium where FC Tiraspol's team coach is parked and finally get lost on an unlit backstreet near Victory Park. A woman with machine-gun Russian and two shopping bags shows me the rest of the way. "It's no problem. Sorry it took so long," she says, disappearing into the night. 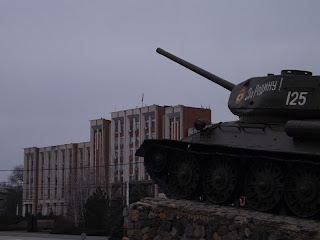 Tiraspol by daylight is only marginally more exciting. City of a thousand black Mercedes, its few sights are spread along October 25th Street: the spired, white-columned Palace of the Soviets has a bust of Lenin outside, the parliament building built in 1960s office block style has a statue of Lenin on its front steps, a T-34 tank, several war memorials, a few dozen metres of sand by a concrete bridge and an equestrian statue to Alexander Suvorov, 18th-century Muscovite general and founder of the city.  An old crone on a collapsible seat tends four goats in the grounds of an abandoned factory building and barrel-chested pensioners sell bags of onions and potatoes near the open-air market.  Outside the $200 million Sheriff Arena Complex are a pair of Sheriff Petrol Stations and signs still adorned with hammers and sickles and CCCP. "Sorry for question, aren't you from Deutschland?" queries the waiter, ungrammatically, at a nearby branch of Andy's Pizza. "Good luck," he smiles as I finish up my Chisinau Draught and head towards the ground. 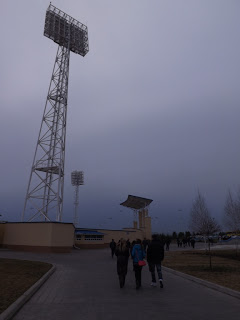 Back in the communist-era, Zimbru Chisinau (Nistru Kishinev) and Tiligul Tiraspol were Moldova's big two football clubs. Zimbru, Soviet Cup quarter-finalists in 1963, spent eleven seasons in the Soviet Top League. Tiligul, First League runners-up in 1991, were denied promotion due to the break up of the Soviet Union, but won three Moldovan Cups as Zimbru picked up eight of the first nine national championships. Neither will figure in this year's title race: Tiligul folded in 2009 and Zimbru haven't won a trophy in almost six years.  Viktor Gushan is the reason why. 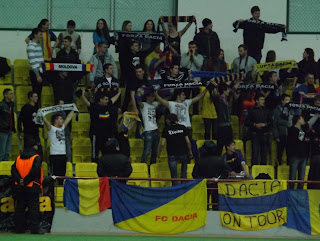 In 1997 Gushan, ex-KGB officer and founder of Transnistria's monolithic Sheriff Corporation, added a football club to a list of assets which include bakeries, supermarkets, a distillery, petrol and TV stations, a mobile phone network and Mercedes-Benz dealerships. Sheriff finished their first season fourteen points clear at the top of the second-tier Divizia A, won the Moldovan Cup in their second and a league and cup double in their fourth. Since then, Gushan's side have won eleven of twelve Moldovan championships, six domestic cups and have beaten the likes of Dynamo Kyiv, FC Twente, Dinamo Zagreb and Slavia Prague in European competition. 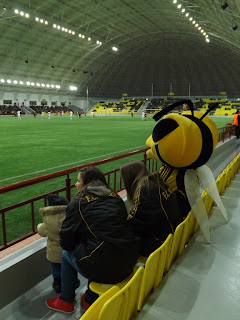 Actually, make that twelve of thirteen.  With a dozen rounds of the season remaining, Dacia Chisinau, title-winners in 2011, trail the defending champions by twelve points.  "Anything can happen," says Dacia manager Igor Dobrovolski, but the Chisinau side lost two players to third-placed FC Tiraspol during the winter break and were held 1-1 by city rivals Academica on their first weekend back.  Despite the temperature -  seven degrees above zero in Tiraspol - the meeting of Moldova's two best sides is played indoors, the 2,500 crowd including a raucous contingent of approximately thirty fans who've crossed an unrecognised border to see their team play.

While the Dacia Ultras jump, twirl scarves and bang continually on a drum, the home support is surprisingly sedate apart from some high-pitched choruses of Sheriff and a discordant, mournful-sounding horn. The non-playing members of the home squad take up their places in the row behind mine, shaking their heads at each misplaced pass and sending their girlfriends for mineral water and packets of smoky bacon crisps at the end of a dull first half.  The only chance Sheriff are able to create falls to Marko Stanojevic, but the former Red Star Belgrade player hits Sektor 6 instead of the target after stumbling through a tackle on the edge of the box. Dacia's forwards huff and puff but get never remotely look like breaching a defence marshalled by skipper Miral Samardžić and Benjamin Balima, part of the Burkina Faso squad that lost out in the final of the African Nations Cup to Nigeria.  The second half is even less exciting - the only surprise that the official match report makes it into a second paragraph. With five minutes left, Stanojevic jinks round three players before miscontrolling and toeing the ball wide.  The crowd file out through the pitch-black stadium complex into unlit streets. Dogs bark, Belarussian-made trolley buses pass by on their way out of town. Somehow, it all seems very fitting.