It was 1926, the year of the General Strike, when the miners of Washington’s F Pit entered a football team in the second division of the North Eastern League. In the decade that followed Washington Colliery produced Jimmy McGrath, later of Cardiff and Port Vale, Gordon Dreyer, who played for Hartlepool and Hull, Liverpool and Bolton defender Jack Tennant, and Jack Atkinson, who would join many of his Bolton Wanderers teammates in the landings at Taranto as part of the 53rd (Bolton) Field Regiment. Ronnie Starling left Colliery for Hull and turned out in the colours of Newcastle, Aston Villa and England, captaining Sheffield Wednesday to the 1935 FA Cup. A second England international, Jimmy Hagan, went on to make over 350 appearances for Sheffield United, managing Peterborough to the Fourth Division title, West Bromwich Albion to the League Cup, and Benfica to three successive Portuguese championships, a domestic treble and the semi-final of the European Cup. “A wonderful manager and a great man,” Eusebio later called him. 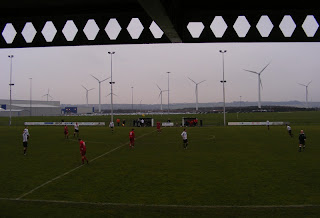 In 1947, the club reformed as Washington Mechanics under a committee elected in the F Pit canteen. The Mechanics won seven Washington Amateur League titles, two Durham Trophy Challenge Cups, and went as far as the third qualifying round of the FA Cup in 1971, losing 3-1 to Bradford Park Avenue before a record crowd of 3,800. After their ground was torn up to make way for an access road, Washington moved to Albany Park in 1979; nine years later they joined the Northern League. Carl Magnay, Chelsea defender and Football Icon winner, played for them in Division Two after being released from Leeds United. In 2009 he won his first Northern Ireland Under-21 cap.

Vandalism was a common occurrence at Albany Park, with ground equipment stolen and seats in the main stand regularly smashed up. But the people who broke in on the night of January 16th 2009 had something far more devastating in mind. A fire was started in a portakabin but quickly engulfed the rest of the ground, completely destroying the changing rooms. The first team kit, already laid out for a home game with Norton, was stacked in a pile and deliberately set ablaze. Tracksuits, footballs, goal nets and first-aid kits were all irreperably damaged. Despite the many offers of help - Durham FA donated a match ball and medical gear, fans of other Northern League clubs raised cash, Camerons Breweries paid to renovate the changing rooms and Hartlepool United defender Micky Nelson arranged for the club to send a spare set of strips – Washington’s biggest problem was simply finding somewhere to play. “We’re devastated. We want to battle on, but we need to find a place to play our home games,” said Derek Armstrong, player, committee member and finally chairman during his 25 years with the club. 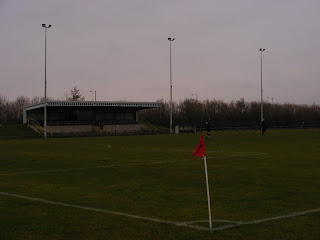 While their own ground was rebuilt, Washington moved to Britain’s biggest car plant, sharing the facilities at Nissan Sports and Social Club. The arrangement was made permanent at the start of this season, Albany Park now left for Sunday morning football and Washington Town of the Durham Alliance. A hut at the entrance to the Social Club car park doubles as a turnstile and programme stand. There are picnic tables and a children’s playground next to one of the corner flags, a bar overlooking the pitch and a cantilevered stand down one side. 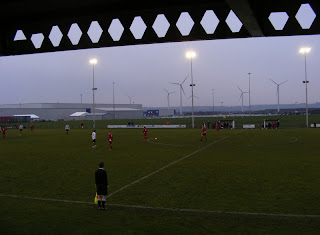 Washington, struggling towards the bottom of the table, fall two goals behind - the opener scored by Team Northumbria’s Dean Critchlow, once an FA Youth Cup semi-finalist in a Newcastle United side that included Andy Carroll and Fraser Forster. On the stroke of half time the ball’s kicked long towards Northumbria’s goal, keeper Andrew Jennison stoops to pick it up at the feet of a forward and the referee signals for a penalty. The players look bemused. “What was that for?” someone laughs. Jennison dives the wrong way and is still busy arguing with the officials when the teams come back out for the second half. “If you see it, get your flag up,” one of his teammates tells the linesman. “You kna yersel' the referee’s having a beast.”

Not that it takes very long for Northumbria to restore their two-goal lead, Lee Scott scoring his ninth of the season as we're finishing our half-time tea in the Penshaw Suite. Jake Richardson, son of ex-Everton, Arsenal and Real Sociedad midfielder Kevin, adds a fourth, but the visitors squander as many chances as they take before Mark Fenwick, one-time junior at Swindon Town, wraps things up in the final minute of the game. “Promotion is the aim. Our side is good enough and we deserve it with our performances over the season. We’ve played all the teams above us and they still have to play each other,” manager Paul Johnson had said beforehand. His side move up to fourth, seven points behind North Shields but having played two games more. For Washington, forced to submit a provisional resignation to the league as they wait for Nissan to formally announce they can stay another season, the biggest victory is surviving at all.