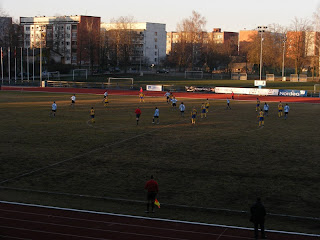 The pitch looked more suitable for growing vegetables than playing football, which was just as well given Jurmala's up-and-under style of play extended even to the rare occasions when they found themselves within shooting distance of the Ventspils goal. Their Tevez-lookalike Argentinian, Kristian Torres, ran around aimlessly in midfield, waving his arms and being eased off the ball by Ventspils's slow-moving centre-halves. "Yellow and blue, stronger," sang the fifty or so away fans in Russian. 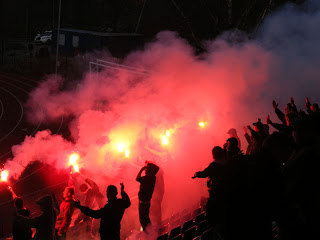 We sat in the only stand, swigging beer we'd smuggled in past the black-suited nightclub bouncers on the turnstiles. The crowd was no more than three hundred, plus about half as many again peering through the wire fence behind one goal. Jurmala played like a Sunday league team; Ventspils at least made a pretence of passing the ball, winning easily by three goals to nil. Other than the flares which greeted each goal, the best you could say about the game is that the sun stayed out until the final whistle.