Malta is a three-hundred-square-kilometre speck in the Mediterranean Sea with a population only marginally bigger than the city of Bristol. It also has over fifty football clubs split into a four-division domestic league, three hundred days of sunshine a year and beer for as little as €1.50 a pint. Seriously, what's not to like?* 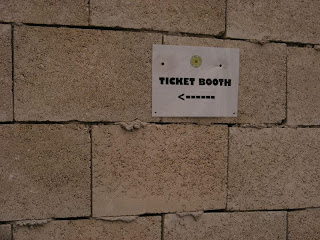 * Except this wall, obviously.

With just nineteen grounds and two grass pitches across the whole of the main island, matchdays are almost always double-headers, one ticket good for two fixtures with a quarter of an hour break in between.  The national stadium, Ta' Qali, is off a main road in the centre of the island, while Paola's Hibernians Ground and the Victor Tedesco Stadium in Hamrun are more easily accessible from Valletta's main bus station. The Tedesco is named after the engineer-cum-actor-turned-political fixer whose Saudi and Libyan oil interests funded Hamrun Spartans' decade-long hegemony over Malta's football league. Without a domestic honour since the end of the 1940s, the club won an average of two every season between 1982 and 1994, Tedesco splashing money on foreign talent like Tony Morley, once a European Cup winner with Aston Villa, and former England international Peter Barnes. The English players were given new suits and shoes, free transport and accommodation and four flights back to Britain every year. "I paid the best wages," Tedesco said. "I was also the manager. I selected the team in spite of the coach at times. He was really just my trainer."  In the end he overreached himself financially, almost bankrupting the club in the process. "I was too enthusiastic, too egotistic," he admitted. "It's a mistake to want only victory." With Hamrun away to Hibernians in one of two Monday night games, first division sides St Andrews and Lija Athletic take up the mantle of home teams for the day, the opening fixture pitting St Andrews against midtable rivals Vittoriosa Stars. I'm accompanied by  Derek, a Newcastle fan who once travelled by train to Bari to watch them play in the Anglo-Italian Cup, and his girlfiend Jo, who's only ever seen  football on TV but thinks she might be able to make it until half-time.  There's an hour to spare until the two o'clock kick off and no-one else in the ticket window queue, so we follow a handwritten sign down a staircase towards 'Il-Bar', finding a squad of ex-Hamrun Liberty players drinking around a pool table. "You want to see more pictures?" one asks, taking us on an impromptu boardroom tour. "Bring your beer. Take photos," he tells us, gesturing towards plastic garden furniture, filing cabinets marked 'Archive', 'Stationery' and 'Tombola', pennants from West Bromwich Albion and Reading Schools, and a trophy collection stretching back fifty years. 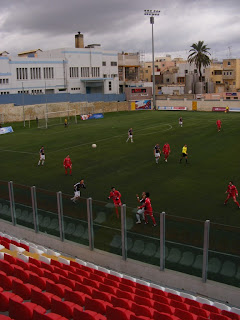 The teams are jogging-out as we head into the ground. "St Andrews' end?" asks the turnstile operator. "Erm, yeah." Inside, a central VIP section appears to be mostly populated by the teams from the second game. A few dozen supporters are segregated either side, watched by four policemen wearing sunglasses and black gloves.  The warm-up consists of a couple of minutes spent tapping a ball around. "Yeah boys, come on," claps St Andrews' Malta Under-21 keeper Daniel Balzan, his gloves thudding against the whir of a generator behind his goal. "One-nil to Liverpool," someone says. "Rooney's not playing." 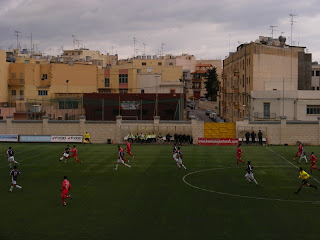 The first half is played at a pace as sedate as a Sicilian passagieta.  A defensive header goes vertically off a forehead, a midfielder slips over and sees a pass bounce away off his knee, and a forward tries a volley which smacks harmlessly off his own chin.  With St Andrews' Portuguese strikeforce of Guti Ribeiro and Valdo Alinho Goncalves left to fend for themselves up front, I count two shots in the opening twenty-five minutes, one of which lodges so high in the netting behind Balzan's goal that the ballboy only manages to dislodge it by throwing a backpack in the air. As soon as the whistle blows we join the queue for a beer, while a full quarter of the police presence retreats to the back of the stand to scoff a bag of Minstrels.  Neil, an English St Andrews fan, fills us in on the background of a team formerly managed by Ally Dawson, a Scottish international defender recently inducted into the Glasgow Rangers Hall of Fame.  "Because we're essentially from Sliema there's a lot of English spoken around the club, which most of the other sides dislike us for. There's a lot of us against the world at St Andrews."  "Especially Melita," his son concurs. "This place will be full when we play against them."  With clubs like Melita and St Andrews often just a mile apart, football rivalry inhabits the fault lines of Maltese society: language, politics and, occasionally, patron saints. "When the World Cup's on the island splits almost straight down the middle," says Neil, "half support England, the rest go for Italy." 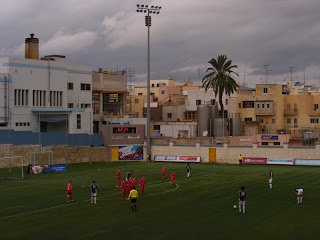 The second half is a much more rollicking affair. Goncalves strikes the crossbar before Nicki Vella Petroni's volley crashes in to give St Andrews the lead. Vittoriosa, with Scottish forward Gary Muir wearing long-sleeves and gloves in thirteen-degree heat, gradually begin to find their way back into the game. "We have a habit of throwing away leads," Neil warns as the referee blows for a free kick. Balzan parries the shot straight to Ramon dos Santos, the Brazilian nudging in at the far post. "We've hit the crossbar twice and now it's 1-1," a St Andrews fan complains. Five Lija fans arrive for the next game, swigging Heineken out of paper cups. Their team are doing shuttle runs behind Vittoriosa's goal when Ryan Previ cracks a first-time shot past Jean Matthias Vella from twenty-five yards out. The Lija and St Patricks players applaud, Previ is mobbed and St Andrews fans jump in the air. "It's more interesting when you watch in person," Jo says on the bus back to Valletta. "Not bad," Derek agrees. "I've seen worse games in the Scottish first division." 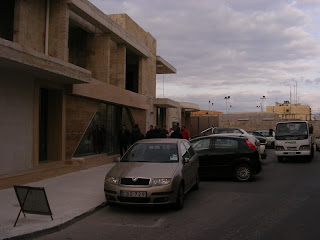 If you're planning a football weekend in Malta, you can find a full list of fixtures here.  All-day bus tickets cost €2.60 for non-residents. For the Victor Tedesco Stadium, take any bus from Valletta towards Rabat and get off at the Mile End Road II stop just after Our Lady of the Miraculous Medal Church.  Bus routes and timetables are here and you'll find a great account of a day at Ta' Qali on the Tales From The Pigeon Stands blog.