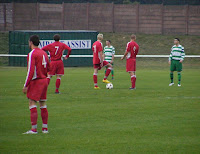 It's almost kick-off when we pull up at the car park behind Consett's red-brick stand. There's a skateboard park with a penis drawn across one of the ramps, a social club still advertising Vaux Beer and a leisure centre with a roof shaped like an ashtray. "Sweep the floor, ladies. No excuses now!" comes an encouraging voice from inside.

We walk through the turnstile, past the man selling programmes and raffle tickets, and emerge on a terrace, steps leading up to the covered seating above. There are grass-covered banks on the other three sides of the pitch, portakabins behind the goal, and a brick tea hut set back from one corner flag. 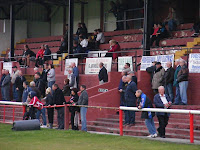 Consett, runners-up two seasons out of three, are one of the Northern League's big spenders. They start well, West Allotment's keeper pulling off two good saves in the first five minutes. But he fumbles the third, which is swept home by the yellow boot of Gavin Ross. "Just a young 'un him, isn't he?" asks a man behind the goal. "Aye," replies the Consett keeper. "Only 18."

West Allotment expend more energy shouting at each other than attempting to attack the Consett goal. "This is shocking lads," shouts the keeper ten minutes before half-time. As if to prove his point, he then shanks his goalkick straight into touch. Consett end the half stroking the ball around like Arsenal - but having similar problems walking it into the net. "Great football, Consett," people shout from the stand. "Aye, but two touches too many," mutters a voice behind the goal. 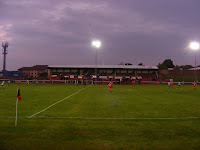 It starts to rain at half-time and when the teams come out everything has changed. Allotment equalise when Marc Walton, once of Torquay United and Newcastle Reserves, is left unmarked in the middle of the box. Their midfield starts driving forwards and mere inches save Consett as they struggle to get any kind of service to their front two. The crowd are getting nervous: "Get it out!" and "Get yer head up, man!"

Consett come back. The keeper claws a shot around the post and Gavin Barton, newly signed from Bishop Auckland, sidefoots in from the corner. Celtic have one more chance from a corner of their own, but the keeper dives to his right and palms the ball away.