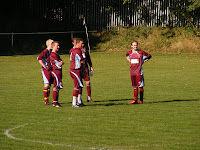 You probably haven't heard of Percy Main Amateurs, but they have a long and proud history in Tyneside non-league football. Reformed in 1919 by returning veterans of the Great War, there'd been a team in Percy Main since before the turn of the century. Jock Rutherford, winner of three Championships and one FA Cup with Newcastle United, began his career with the club. In 1930 they reached the quarter-final of the FA Amateur Cup.

Foregoing the televised delights of Stoke versus West Ham for an appointment with the dentist and a walk under the Tyne, I get to Purvis Park just in time for kick-off. The £2 entrance includes (to my surprise) a programme that puts many Northern League clubs to shame. Exiting the clubhouse, I head for the raised bit of concrete behind the dugouts where most of the forty or so spectators are already standing. There's a metal barrier around three and a half sides of the pitch, weeds and overhanging branches forming the boundary for the rest. A privet hedge shields the village cricket pitch behind the goal to the right. The only cover is from the overhang of the clubhouse roof. 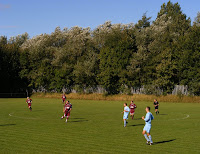 The opponents for a place in Round Two of the Kicks Leisure Cup are Carlisle City, fifth versus seventh in the Northern Alliance Premier. The teams are evenly matched in the opening half: City have a shot tipped round the post at one end, Main clatter the crossbar at the other. Both sides struggle to keep the ball, and soon tempers begin to fray. "Encourage don't bollock," instruct the Main bench. "How many times, referee?"

Carlisle take the lead midway through the second half after a triangle of passes down the left, but Percy Main level when the keeper spoons a long free-kick over his shoulder and a substitute jabs the ball into the unguarded net. The keeper stomps his feet, Percy Main's coach dances on the pitch, "We don't crumble, we don't crumble," implore the Carlisle bench. 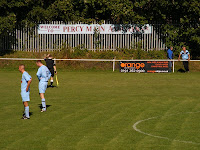 They don't - but they don't look like scoring again either. Main take the lead in the first period of extra time from a through ball into the area. "Too long," says the man next to me but one touch sends the ball under the keeper's body and into the net. The third comes from a corner, but both benches, engaged in an argument about sportsmanship, manage to miss it.

The final whistle goes with Newcastle one-nil up at Everton. That's two reasons to celebrate for the people at Percy Main. 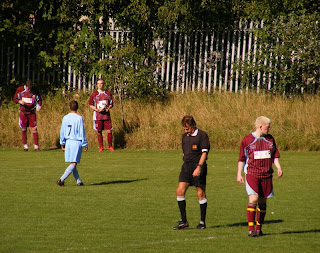 Winding up another long throw. 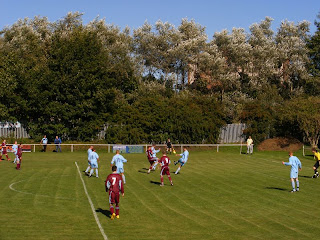