Likeable Whitburn Athletic are a busy groundhopper's dream.  In the past three seasons they've played at three different grounds, all within walking distance of my parents' home.  From a school playing field in their home village to a wind-blown municipal pitch formerly used by South Shields,  the Northern Alliance Second Division side have now moved to a 4G surface at Temple Park, a dual carriageway's distance from Wearside League neighbours Harton & Westoe Colliery Welfare FC.   As with a higher-profile set of summer stadium switchers, the South Tynesiders have struggled for form at their new base, failing to win in three home league games before tonking Wolsingham in a Durham Minor Cup tie played in front of a not quite record crowd of zero. "It's becoming a regular theme with us that we have shocking first halves, fix it at half time, then say we'll start how we finish from then on," wrote Andy Smith, striker, secretary and club founder when Athletic first entered a team in the 2010-11 Wearside Combination League. 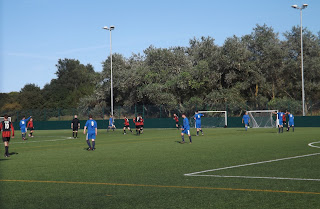 The fifth visitors of the season are Prudhoe Youth Club Seniors for a game in the Bluefin Sport Amateur Cup.  The away side are waiting for kick off when I arrive, the home team traversing the hundred or so metres from the leisure centre changing rooms accompanied by a pair of cyclists, a woman out walking her dog and a group of kids heading to the adjacent skateboard park.  Seating is provided on some flat-topped rocks; the only shade comes from a shipping container placed next to a sign announcing the facilities were funded by the Premier League and FA. "Pogba," yells a player, warming up by attempting volleys into the net.  "Jonjo Shelvey," says another as he tries to replicate the top-corner goal at QPR.  Someone jokingly whistles the Champions League theme as the referee does a head count.  "Howay lads," a Prudhoe player shouts.  "Challenge!" 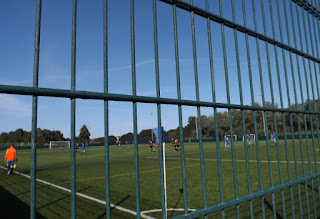 Whitburn start falteringly once again.  "Where's the shape?" a defender enquires. "Drop in, drop in," says the substitute tasked with carrying the linesman's flag.  Prudhoe miss with two one-on-ones in the space of five seconds before the home side undeservedly go ahead from a corner kick, though the scores are back level when a left-wing foray beats an attempt to play two attackers offside and the cross is turned smartly past the helpless home keeper.  "We've gone back in our shells again," a Whitburn player grumbles.  "Well on top now," the goalscorer says. Prudhoe's manager is certainly happier at half time. "Just need to put these chances away," he tells his team.  On the other side of halfway, a frustrated Ryan Shave is less complimentary.  "We need someone, anyone to start organising," he emphasises. 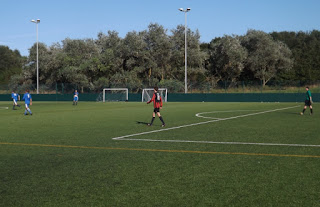 The attendance climbs to seven at the start of the second half, though it immediately falls back when a Prudhoe substitute dumps the assistant's flag on his dad.  "It's just I can't really come on if I'm the liner," he apologises as his replacement slightly unwillingly takes up position wearing sandals and denim shorts. The visitors score a second, Whitburn lose captain and club treasurer Kieren Laverick to injury and then concede a third, Prudhoe stroking the ball around for close on a minute before lashing it into the net from 25 yards. "No pressure," moans a home player. "Been the same from the start."  Two goals for the home side sandwich the Northumbrians' fourth.  "When are we going to put this to bed, lads?" asks the visiting manager before his team finally kill the tie with two late goals.  "West Brom three nowt against West Ham" a spectator is reading off his phone as the players shake hands. "So disjointed, so disharmonious, and absolutely our own worst enemy," is Smith's diagnosis of his team's early season displays, proving there's at least one thing South Tyneside's Temple Park has in common with London's Olympic Stadium.