"The pitch is slanted, bumpy, and dotted with dandelions...every linesman who visits digs deeper into a three-inch mud trench that traces the touchline nearest the club house," wrote the News & Star on the morning football finally left Southend Road. "A sign glued to the main gate (reads) ‘Penrith AFC, 1884-2009 RIP’"

The last - and possibly only - time I visited Penrith was in September 1999, the month that I signed up for my first ever email address, Kieron Dyer made his international debut, Sunderland beat Newcastle in a match made absolutely farcical by torrential rain and Ruud Gullit's ego and I left Tyneside for South Korea, where I worked for the next three years (the last two events were only tenuously related).  Preoccupied with the task of tracking down Withnail & I locations (we didn't realise until later that cake, tea, morally outraged proprietors and "the finest wines available to humanity" could actually be found not far from Milton Keynes), we failed to notice the existence of a football ground between the red-brick, Victorian railway station and Toppers, Penrith's only nightclub,  which, to my lasting regret, we stumbled across later that night. 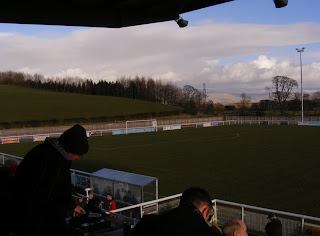 Stanley Matthews, Kevin Keegan, Bill Nicholson and Burnley were among the many who did find their way to Southend Road, though none - not even the Clarets, who recorded a 9-0 victory in the first round proper of the 1984-85 FA Cup - could come anywhere near the ludicrously prolific Charlie Short, scorer of 212 goals in three post-war seasons - an incredible 102 coming in 1947-48 alone - as the Blues went from facing district competition to playing in the Northern League. Crowds of up to 2,000 were the norm, an estimated 4,000 fans witnessing an epic Amateur Cup tie with West Auckland in 1961 and 2,100 celebrating an FA Cup first round win over Chester City thirty years later.  “At home games I had to crawl on hands and knees past spectators three-deep around the ground to get to watch games from the touchline," remembered David Noble, who went from childhood supporter to chairman of the club. In 2009, when Penrith finally relocated to an out-of-town site at Frenchfield Park they left behind a decade of near ruinous turmoil and a ground that had existed for as long as the football club itself. 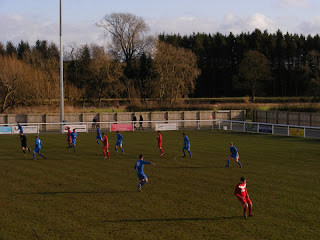 "A smashing little club" in the words of Northern League chairman Mike Amos.  If you come by car, it's a smashing little ground too, a few hundred metres from the A66 and the River Eamont with a covered main stand looking out on the North Pennine hills.  We park in the town centre, have a pint in the pub where the Duke of Gloucester - later Richard III - stayed while he supervised work on Penrith Castle, then drive back out past the half-completed Sainsbury's which now marks the spot of the old Southend Road. "It's a young, inexperienced, very keen and very enthusiastic Penrith side this afternoon," says Colin Seel, 25 years a Football League referee and now the voice of the Frenchfield Park PA, "depleted due to injuries, commitments and other reasons." 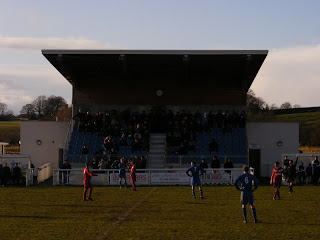 After trying their luck in the North West Counties and, briefly, the Northern Premier League Division One, Penrith returned to the Northern League at the end of the 1990s, winning two second division titles but never threatening to match the achievements of 1961-62, Alan Ashman's ending runners-up behind Stanley United and winning the second of six successive Cumberland Senior Cups.  Ashman left to take West Bromwich Albion to the 1968 FA Cup, Olympiacos to a second-place finish in Greece and Carlisle United to top-spot in the Football League.  These days Penrith have slightly lower aspirations: "The Blue Square Premier would be a nice dream," owner Ges Ratcliffe says.  They start the afternoon in eighteenth place, twenty-nine points behind a Spennymoor Town side who've won the Northern League title two seasons in a row.  "We'll have to do lots of defending today," predicts an elderly home fan as we queue up for food. "The chips are crap,  the pies are good and the burgers are better," my brother had told me after his visit earlier in the season. For the burgers at least, I wouldn't disagree. 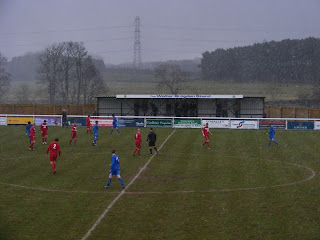 Penrith start well but are soon pegged back. Lone forward Martin Coleman hesitates when given a chance to shoot at keeper Robert Dean; at the other end James Holland turns a shot from Spennymoor's Jamie Harwood away one-handed then blocks a second shot on the line. The afternoon sunshine turns to sleet, the floodlights turned on for five minutes as Steven Richardson squeezes through a challenge and slips the ball through Holland's legs.  "It's been coming," a home fan says.  Richardson has more chances to score, heading wide and skying a half-volley into a hedgerow in the opening ten minutes of the second half alone.  By this time we're in the bar at the top of the stand, peering through a window while we finish off pints of Jennings and listen to the half-time scores. "Don't forget the prize in the raffle is a ticket for tonight's National Lottery," says the voice on the tannoy. 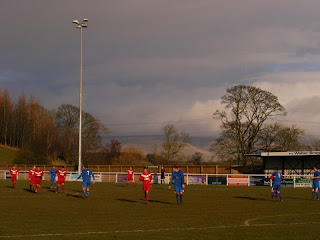 The home side are as enthusiastic as Seel had promised but can't breach a midfield every bit as solid as the walls of neighbouring Brougham Castle. There are ten minutes left when Gavin Cogdon finds space in the area and passes a shot under Holland for two-nil.  Richardson gets his second with the very next attack, a long ball bouncing off two defenders and landing at his feet as he bursts into the penalty area.  "We didn't deserve that," a Penrith supporter rightly says. "Could have been three or four just in the first half, mate," a Spennymoor fan replies with equal justification.  Having controlled the game the defending champions move up to third in the league table, now just two points behind leaders West Auckland Town.