Formed in 1946, the Boatmen of Dunkirk FC played on council pitches in the Notts Amateur League for their first three decades of existence before getting permission to develop a farmer's field by the banks of the River Trent (it proved a little too close in 2000, when their pitch was flooded). In 1975 they stepped up to the Notts Alliance and in 2008 they joined and won the newly-formed East Midlands Counties League, gaining promotion to the dizzying heights of the Midland Football Alliance.

The Ron Steel Ground is a thirty-minute walk from the summer school I’m working at, along the cycle path to Nottingham City Centre, over Clifton Bridge and down a narrow lane lined with conifers and blackberry bushes. There was a golf course on one side of the stadium, the Trent was close by another, and only a poplar tree border separated the football from a cricket match at Notts United Casuals. 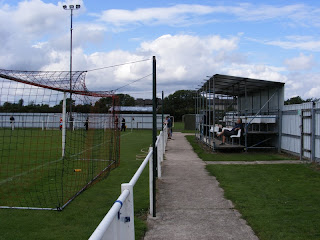 When I arrived there were already a dozen or so people sitting outside the clubhouse bar watching the players warm up on an adjacent pitch, including a photographer from the local evening paper. “No team photo please, Evening Post man,” ordered the Newark Coach. Fortunately for the paper Dunkirk were more obliging.

Both on and off the pitch. After dominating the first half hour, the home side went behind when a pass back bounced over the keeper’s foot. "Clean sheet, lads, and a nice one-nil," encouraged the visiting bench. A couple of minutes later it was almost two as a long-range shot trundled against the base of the post. But the threatened goal, when it came, was at the other end, quickly followed by a second. “Make sure your heads stay up lads,” shouted the Newark coach. 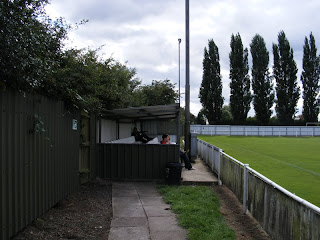 And the other
At the half-time whistle the crowd split into two queues, one for the kitchen hatch, the other forthe bar. There were framed Wes Morgan and Jake Sheridan (who started their careers at Dunkirk before moving on to bigger things at Nottingham Forest and Notts County) shirts hanging on the wall and Sky Sports News was showing the scores from the day’s other friendly games: Portsmouth 1 Fulham 0, Lyon 2 Celtic 2.

They should have been in Nottingham. The second half was all Dunkirk – 3-1, 4-1 (though Newark did hit the bar with a shot from the kick-off), 5-1, 6, 7, 8, 9, 10, 11. “It must be heart-breaking for ‘em,” said the Dunkirk committee man as the Newark keeper gave the ball an angry kick back towards the centre spot. “Heads up lads,” came the voice from the visiting bench. 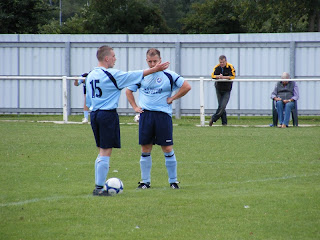 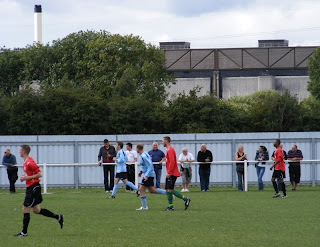 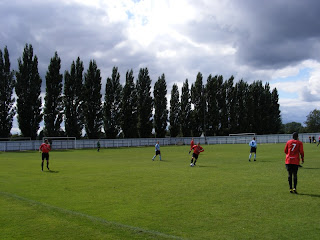 No peeking over that fence.
Posted by Michael at 19:33 No comments:

As I've never been much good at actually playing football, the closest I came to representing Northumbria University while studying there was occasionally sitting near someone in lectures who turned out in midfield for the second team. Not that they had much of a side back then. Joining the Northern Alliance as recently as 1999, it took Northumbria University FC seven years and a change of name to the Olympian-sounding Team Northumbria before they were promoted to the second division of the Northern League, where they've stayed ever since. 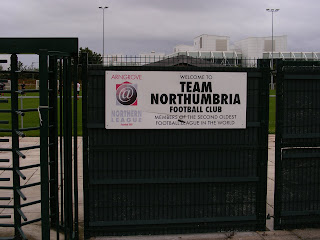 Just so you know.
Arriving a few minutes before the advertised seven o'clock kick-off time, we found a cracked sign, an open gate and both teams in the middle of their pre-match warm-up. "Game kicks off at half past," I overheard someone say, and retreated back to the warmth of the car. The crowd had swelled to thirty by the time we came back, taking up our seats in the front row of the tiny main stand for what turned out to be a lively first half. Both sides tried to play the ball along the grass (which wasn't too hard given the length of it), and there were chances at both ends, Northumbria taking the lead with "the weakest shot ever" before the visitors, newly-promoted Jarrow Roofing, equalised from a close range header that was more Sneijder than Shearer. The main stand and a burger van (scale 1:1).
After a frenzy of half-time substitutions, the second half was much scrappier than the first, though Northumbria did manage a late (semi-disputed) winning goal. What entertainment I got came from the voices around me: "Don't foul! Don't foul!", "Build again from the back", "I'm pig sick of garlic bread", "Look where you're kicking it Andy, will you?", "Linesman, is this the second half?" 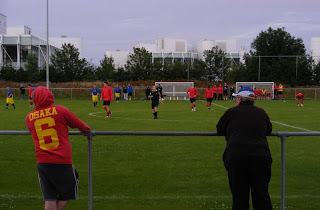 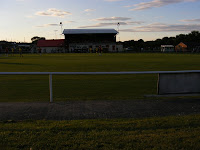 Twenty hours after arriving back in Britain in the midst of a torrential downpour I was standing in glorious sunshine at Horden, hometown of Brian Little, Super Bob Taylor and Manchester City's Adam Johnson, a player Fabio Capello rates only slightly less highly than Shaun Wright-Phillips. Founded in 1908, Horden Colliery Welfare (to give them their full name) reached the FA Cup second round in 1939, played in the first round on five different occasions, and won the Wearside League title ten times before stepping up to the Northern League in 1975. Things haven't been so good since Horden Colliery closed in 1987, however - last season they finished bottom of the heap in Division One with six wins from forty-two games.

The crowd for the visit of a Hartlepool XI was approximately 7,950 short of the 8,000 who packed in to Welfare Park to see the 3-2 loss to Newport County in 1939. A cricket game was taking place on a pitch next door and the sea was a dark blue stripe behind the far goal. After a nervy start, Horden scored twice in five minutes against a Hartlepool side that looked so young I was surprised their parents didn't come to pick them up at the final whistle. "Two nil and you know it is," sang a pair of ten-year olds in Manchester United and Juventus strips, breaking off from a kickabout on the side of the pitch. Playing up and across the slope, Hartlepool managed to pull a goal back before a fumble from the goalkeeper gifted the home side a third early in the second half. He put up a hand in apology. "What's the score, mister?" a kid shouted through the fence. 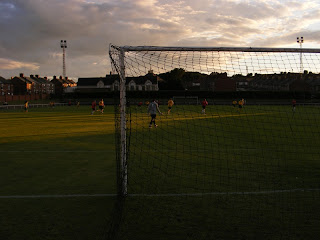 Hartlepool's keeper. Form he was in, I would have stayed away from the goal too. 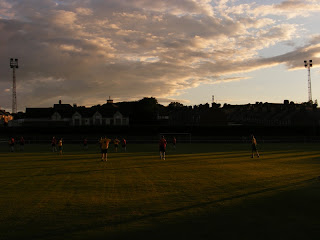 Evening sunshine by the North Sea. Not often you get to type those words. 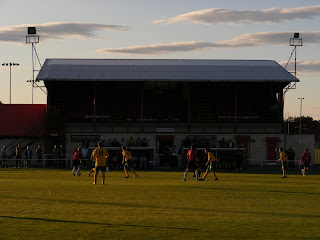 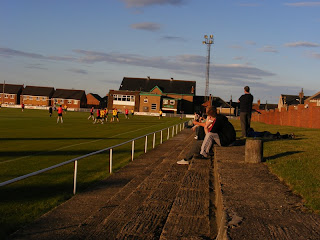 "Do you reckon there's a slope on this pitch?" 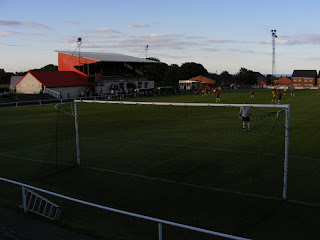 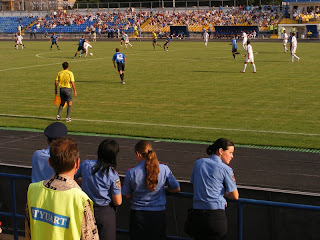 Competitive football is back. After the world's dullest nil-nil draw against Vorskla and the two-nil hiding versus Kharkiv, I was hoping it would be third time lucky for me and Chornomorets Odessa. Third definitely wasn't lucky for yesterday's opponents, Stal (Steel) Alchevsk, who finished last season behind Sevastopol and Volyn, missing out on promotion by just one place.

With temperatures still over thirty degrees at kick-off it was no surprise the game began slowly. Alchevsk looked slightly the better side, taking the lead after seventeen minutes when Odessa's young keeper palmed a header inside the post. The two away fans jumped out of their seats. Everyone else laughed and went back to their sunflower seeds. 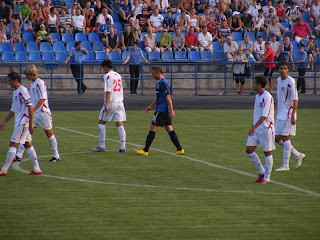 Five minutes later it was one-all. A corner was cleared as far as Alchevsk's star Congolese midfielder, who decided, as you do, to head it back in the direction of his own goal to an unmarked player from the other team. Control, scuff, goal.

That was as good as things got. As the second-half got bogged down in long balls, misplaced passes and midfield triangles, there were a couple of one-man pitch invasions and a shoving match between the Odessa ultras and some out-of-shape policemen, who tried, and failed, to make an arrest. The two groups stood staring each other out for the rest of the game, no-one much caring what was happening on the pitch.

The Big Kick Off

Due to the length of the winter break and the national team's failure to make the other important tournament that's happening right now, the Ukrainian football season gets back underway tomorrow night with league winners Shakhtar Donetsk versus cup holders Tavriya Simferopol in the Charity Shield Super Cup, the just about traditional curtain raiser to Shakhtar and Dynamo Kyiv's annual two-horse race for the title.

The Premier League itself kicks off on Friday, with Dynamo away at Obolon if you happen to be in Kiev. Fans of the Persha Liga, now home to Chornomorets Odessa, the country's third biggest club (though Dnipropetrovsk might beg to differ), will have to hang on until the 17th - a full six days after Spain (or Argentina) win the World Cup Final.