"I was the kid who came from a little part of paradise, to me it was heaven. Everything that I've done, everything I've achieved, everything I can think of that has directed and affected my life - apart from the drink - stemmed from my childhood".

It was the first weekend of September and summer was barely clinging on in Middlesbrough's Albert Park.  An elderly couple shuffled past the sunlit bandstand,  a bloke was showing his son the South African War Memorial and a cannon captured in the Crimea, and two women traded gossip under the branches of a tree.  "Get away, he never! He'll be alright if they win this afternoon."

A little way off stood another figure, seven-foot high, cast in bronze and with a familiar twist to the mouth.  "I want no epitaphs of profound history and all that type of thing," Brian Clough had once commented. "I contributed - I would hope they would say that, and I would hope somebody liked me."  Three years after his death, and over three and a half decades since he'd left his hometown club, there were enough there who still liked him to make up over half of the £65,000 a statue in his honour had cost.  "It's in recognition of one of the greatest people to ever come from Middlesbrough," said the chairman of the fund-raising committee.  "There was a deep reservoir of feeling for Cloughie in this town and they don't want him to be forgotten". 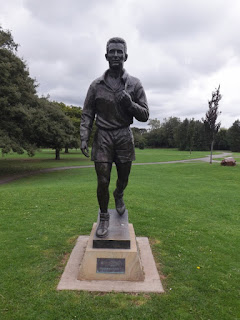 Clough, Albert Park and football went back a very long way.  It was there that Middlesbrough had played their very first matches, using the archery strips for pitches until they were kicked out for making a mess of the grass.  Born on one side of the park at 11 Valley Road, he would, wrote Jonathan Wilson, "race home from school every night, change into old clothes and then dash (straight there) to play football or cricket".  Later, even after moving from games with Acklam Iron and Steelworks Athletics to a professional contract, he'd return to the playground of his youth with a wheelbarrow and cart wallflowers home to his mother's garden.  "We spent many sunny days in ths park, so it's really appropriate that it's here," thought Clough's widow when the statue was unveiled in May 2007. 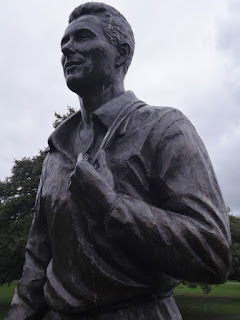 "When Clough left for Sunderland, the town wept," Daniel Gray wrote in  Hatters, Railwaymen and Knitters, his magnificent account of football in England's lesser-visited provinces.  "The only thing I enjoyed during my six years there was scoring goals," Clough recollected in 1973. "From Saturday to Saturday I was very unhappy.  My ability was never utilised, by me or the management.  Only goals kept me sane.  That was my only pleasure."  Nonetheless, the man always remembered the place that had shaped him. "Wherever we went, Brian made sure everybody knew he was from Middlesbrough," his widow said. "I think if his success as a manager had happened here, that would have been his ideal.  But life is not that perfect." 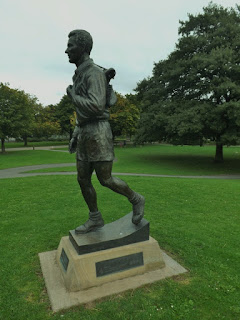 Unlike the sculpted tributes at Derby and Nottingham, Teesside's Clough is young and lithe.  "Twenty-four and in training gear," wrote Gray, "his boots slung over a shoulder, purposeful, on the way to training or a match".  It's placed on his route from home to Ayresome Park - two pitches' length away from the statue - and now part of a waymarked trail that passes the street where a second managerial genius was raised.  Don Revie left at 17, fleeing poverty and the spectre of the Holgate End workhouse. "He used to talk about taking baths in the sink," said one friend. "It was a poor upbringing and that left him determined that everything went well later on the monetary side".  For all his flaws, Clough was a man of the people, sticking around long enough to become the Holgate's idol and leave behind a legacy of a phenomenal 197 goals in just 213 games. "He would have been absolutely amazed at the very idea of a statue and he would have been so touched at the different ways you have raised the money," his widow told the crowd at Albert Park. "You have done him proud and I thank you from the bottom of my heart".
Posted by Michael at 21:14 No comments:

Early-November and already the English weather is playing havoc with my Saturday afternoons.  With my planned trip to Dringhouses falling victim to a saturated pitch, here's something I wrote for this afternoon's Jarrow Roofing programme instead.


When Julio Arca became, as Harry Pearson put it, “the only U20 World Cup winning captain ever to score against Stokesley”, it was far from the first contact between overseas footballers and stalwarts of the Northern League. In August, Fabian Otte, ex-starting goalkeeper for New Zealand's Western Suburbs and formerly of Bayer Leverkusen U23s, turned out for Bedlington Terriers against Whitley Bay, while recent years have seen, among others, Laurent Sanson move from France to Newcastle Benfield, Mateusz Halambiec go from Morpeth Town to the Polish second division, ex-AS Roma junior Matteo Faiola play for Roofing and Bishop Auckland, and Tow Law field Gustavo Silva, the league's first jogador do Brasil. “He knows all about the weather,” Lawyers secretary Steve Moralee promised. “He's trained here in the snow wearing shorts.”

The movement hasn't always been one way. While West Auckland's Lipton Cup exploits are well documented, Bishop Auckland toured Belgium for the first time in the year that West made their inaugural journey to Turin and made it as far afield as Hungary as early as 1912. Jack Greenwell's Barcelona hosted Crook the following season and employed a second ex-Northern League man when Harold 'Collie' Stamper – a 1912 Olympian and FA Amateur Cup winner – joined as a coach from Stockton. Stamper went on to Genoa; Greenwell, more famously, played 88 times for Barca, managed Espanyol and Valencia to league championships and guided Peru to a Copa America title in 1939. “The Peruvians were well served by their English manager, who out-thought Uruguay tactically in the final match,” wrote Andreas Campomar in his magisterial history of the Latin American game.

The Northern League's first foreign-born player was Arthur Wharton. “His father was half-Scottish, his mother was related to the Ghanaian royal family,” wrote the Northern Echo of a pioneer whose career achievements included an FA Cup semi-final and a world record time for the 100-metre sprint. Now recognised as the world's first black professional footballer, the goalkeeper won a Cleveland Challenge Cup with Darlington, was signed by Preston North End and later understudied William 'Fatty' Foulkes at Sheffield United. A less celebrated figure, Billy Charnock was born in Serphukov, 62 miles south of Moscow, to a family of textile factory owners who orginally came from Leek. In addition to playing for Bishop Auckland, Charnock also captained Russia in their first international victory, a 3-0 win over Norway in 1913. 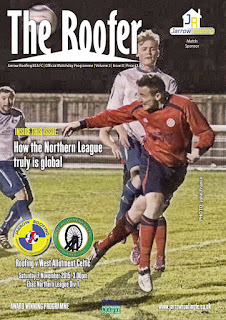 As clubs continued to look outwards – Crook toured Norway in 1962 and lost by a single goal to the Indian national team 14 years later - Northern League imports have arrived from places as seemingly implausible as Atletico Madrid, who supplied Stokesley SC with Asenjo Bravo in 2012, and Japan. "In 1991-92 Durham City registered Yoshinobu Uchida, though the sole surviving reference in print or online merely reveals he was 'from Tokyo, a student at Durham University' ” I wrote in a programme column last year which also referenced the curious case of Yosuke Suzuki's time at Whitley Bay. In 2008, Owen Amos had a piece in When Saturday Comes on Brandon United's BJ Heijmans, “who, by a series of happy accidents, found his home in deepest County Durham”. Amos caught up with Heijmans at a training session: “We play the Dutch way, from the back. We have conceded 63 goals this season, and 50 were from individual mistakes. But we are young, and that will improve.” Among the onlookers that “cold Thursday night” was the Argentine Gus Di Lella, recently sacked as manager by Horden Colliery Welfare. Di Lella is now coaching at Seaham Red Star, who've also recently had a Bulgarian and a New Zealander on their books. Bedlington, of course, have close ties with the USA through president and Buffalo Bisons owner Bob Rich, while Durham City are owned by Olivier Bernard, once of Lyon, Newcastle United and the Champions League.

So next time someone writes disparagingly about the Northern League's insularity and isolationism, remember Heijmans and Wharton, Crook Town playing to 100,000 people in Calcutta, Suzuki, Uchida and the nomadic Jack Greenwell, born in Peases West in 1884 and buried, by way of Italy, Spain, Turkey and Peru, in a Bogota grave that is forever south-west Durham.

As the rain swept on from York, Roofing's game with West Allotment Celtic was called off with most of the club's volunteer matchday staff midway through a 12-mile charity walk. "Some good stories, anyway," messaged the club's media manager and goalkeeper coach. "Bird shat on me, the secretary slipped on dog shit and we spent 30 minutes in a bus stop sorting out the postponement." The full programme, plus insert, will be on sale for £1.50 at the re-arranged fixture, or via email for whatever you want to pay.
Posted by Michael at 16:07 3 comments: