“I smoked in a crowd,” reads the sign overhead. “I was alone.” “The mother eyed my cigarette as she passed by with her young child,” starts another one. “You tossed your cigarette out of the window,” says one hanging from the ceiling, accompanied by a drawing of a cigarette with the word ‘Victim’ printed accusingly above. “You looked like you were fleeing the scene of a crime.” I turn my head towards the door. “I threw my cigarette butt in the drain. That is to say, I hid it in the drain.” The left ear of the person next to me droops to within an inch of my shoulder. It’s eight on a Saturday morning, the train is only at Gifu, and the weekend has already taken its first turn for the bizarre. 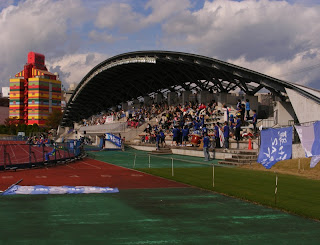 The Shiga Bluecoats
I arrive in Kyoto, shuffle up the stairs behind someone dressed in a maroon puffer jacket with ‘Detroit Kill City’ stitched across the chest, and take five escalators to the Happy Terrace rooftop garden (“Creation of environment friendly urban life space and place of information transmission.”). The trees are still green and the outside temperature is 21 degrees but workmen are already putting up the giant Kyoto Station Christmas tree. “Lets Merry!” exclaims a sign outside Starbucks. A cleaner in a light blue and baby pink jockey’s suit runs a vacuum across the escalator steps. I head back down to the platform and the next train to Katata. 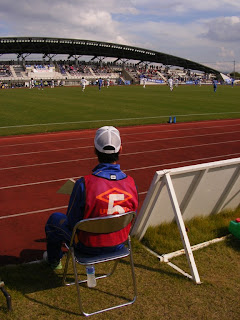 From the old to the new, I cross the neck of Lake Biwa – formed around five million years ago, some say by the same earthquake which created Mount Fuji – on a concrete bridge, supping Kirin Beer. A right turn at the other side, past a love hotel cluster - £20 for a ‘rest’, an extra tenner for ‘service time’ and twenty on top for an overnight sleep, though the mind boggles at the kinkiness going on in the Lego-block Chapel Christmas  - and I’m at the ground just in time to see Sagawa Shiga and Sony Sendai FC, top and bottom in the semi-professional Japan Football League, come out of the solitary stand, flanked by two rows of cheerleaders in red miniskirts and sequined pom-poms. “Sony Sendai,” yells a bespectacled man in chinos and a baseball cap, a drum and cardboard box placed either side of his feet. At the other end of the stand the forty-strong Shiga supporters’ group test out their loudhailers and launch into songs to the tune of Rule Britannia, Smoke on the Water and It’s Off to Work We Go from Snow White and the Seven Dwarves. 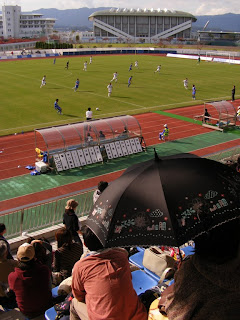 Backed by Sagawa Express, one of Japan’s largest parcel delivery companies, with a client list that’s included Amway, Amazon, the Yamada Denki electronics chain, Tsutaya bookstores and the Japanese mafia, Shiga were formed in 2007 with the merger of Sagawa’s successful company sides in Osaka and Tokyo. Relocated to the firm’s home prefecture, the new club have won the JFL in two of the following four seasons, finished second once and lead this year’s competition by four points from Parceiro Nagano.   Forty years older, Sony Sendai were established as the works team of a Sony branch office, but play a distant second fiddle to neighbours Vegalta, who play two levels higher in Japan’s top-flight league. Their place at the foot of the table has more to do with the devastation wrought by March’s tsunami than their lack of quality on the field, with the team having played just over half the games of the division’s seventeen other clubs. 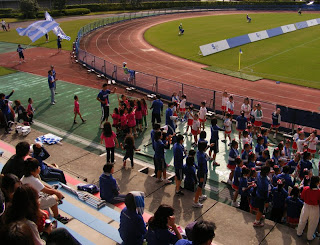 Let's dance
Patient and controlled in possession, Sendai dictate the pace from defence, an off-colour Shiga hustling the ball to little avail. Yuki Miyao wastes the away side’s best chance of the half, looping a free header over the bar with thirty minutes played. Skipper Nobumitsu Yamane puts a right-footed shot wide of the post for Shiga but that’s nothing compared to the action on the side of the pitch, a barefoot fan in a ‘Tran’sport Communication Sawaga’ cape leading a group of around a hundred schoolgirls wearing blue t-shirts with ‘Thanks for all…’ on the back in a choreographed song and  dance routine which ends with a shimmy to the left, mass fist pumping and a high-pitched eruption of ‘Hey, Hey, Heys!’  Things get even more Butlins Holiday Camp at half time when a singer starts belting out a love ballad on an electric keyboard while three stewards do overhead claps and star jumps on the running track behind. I try to track down a beer stand but find nothing but candy floss, chicken on a stick and a sculpture park of stone animals back beside the turnstile. 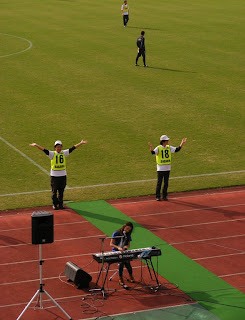 And sing...
With most of the away fans distracted by their make-up mirrors Sendai fashion the first chance of the second half, their ponytailed strikeforce combining as Jumpei Murata slides in Kouhei Aso to put a rising effort wide of goal. Shiga go long towards big forward Hideyuki Takeya and are almost rewarded when a chest down is whipped off the toes of Yuta Hamada as he homes in on Sasumu Kaneko in the Sendai goal. Shiga waste two free kicks and I walk towards the turnstile thinking it’s not going to be their day, before a pair of quick goals in the last ten minutes gives them an undeserved three points. I scurry back to Katata, making it to the platform as the tannoy announces the approach of the 15.08 to Kyoto. 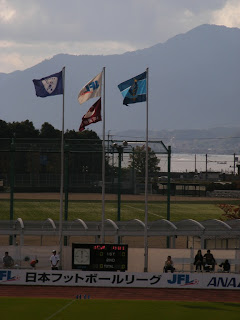