One hundred and twenty-five years after the first game of football was organised in the High Peak, New Mills AFC finally made it to a Step Four league, winning the Vodkat Premier by an eleven-point margin after two second-placed finishes in the previous two seasons. But then geography intervened. Enfield 1893, champions of the Essex Senior League, were ruled out of promotion by an Isthmian League ground inspector. In the reshuffle which followed, Ossett Albion, newly relegated from the Evostik North, were reprieved on a points-per-game formula, filling the space earmarked for New Mills. One failed appeal later, the Millers were placed in Division One South, leaving them with trips to Grantham Town, Market Drayton, Romulus and Sheffield FC rather than any of the six clubs from Greater Manchester who play in Division One North, including one, Woodley Sports, who even share their SK postcode. 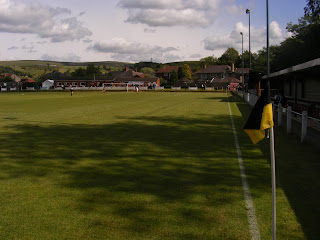 My own journey was a bit less complicated. A half-hour train ride from Manchester Piccadilly brought me to New Mills Central, from which the Church Lane ground is an easy 10-15 minute stroll: up the steep Station Bank, right at the junction by the Heritage Centre, over the River Goyt bridge, left past the Co-Op and opposite St George’s Church, passing two pubs and a Cantonese along the way. There’s hard standing on two sides of the immaculately tended pitch and a covered stand down the length of one touchline. The clubhouse, bar and tea hut are behind the goal nearest the entrance, picnic tables arranged on a rise, grassy hills and chimney-tops peering over the wooden perimeter fence.

I take up a seat next to three men in yellow and black scarves. “£6.50 for a friendly?” says one. “It’s not right. I’ve told them it’s not. I had the grandkids with me but I wasn’t paying £3 for a game like this. Sent them home, and that’s £6 you’ve lost there.” The few dozen fans who’ve made the journey over the border from Bala Town gather at the entrance to the bar as their team are put through their paces in the afternoon sun. 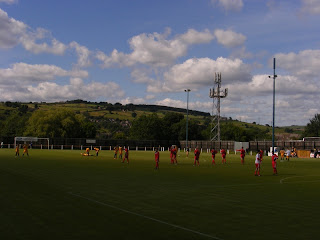 The training session pays off as the visitors pin New Mills to their own goalline for most of the first half. Lee Hunt has the game’s opening chance, Procter pushing his shot back out and the Millers’ defence – which includes Wes Brown’s brother Clive – scrambling the ball away. Shortly afterwards an effort from Stuart Jones strikes against the underside of the bar and spins away from goal, Procter clinging to his line like Ed Miliband faced with a TV camera. “Tell you what,” says one of the bumblebees to my right, “this lot are going nowhere. Not a chance. We’re gonna get battered. Straight back down.” “Crap crowd too,” mutters another voice. “It’s cos they’re robbing bastards. If you’re paying £6.50 for a friendly you should be seeing top players not trialists.” “It’s something we’ll look at next year,” says the woman selling raffle tickets, pausing on her way around the pitch to see Bala screw another two chances narrowly wide of Procter’s right hand post. 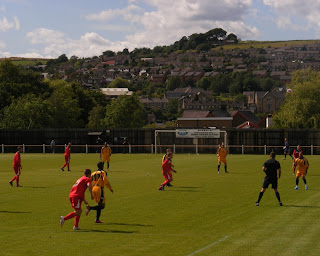 It takes forty-three minutes for the Millers to seriously threaten Terry McCormick’s goal, Danny Pringle meeting a cross from the right with a volley that gives the home side an entirely undeserved lead. “Counter attack,” says a man to my left, sagely. If the first goal was a surprise the second is astonishing, the flying head of Matt Berkeley touching a cross past McCormick. “Mark the runners, stop the crosses. It’s not difficult, is it?” the goalkeeper moans.

Two down with quarter of an hour to play, the Welsh Premier League side flick on the turbo switch, Chris Mason finally drawing Procter off his line before slipping the ball under the goalkeeper's body. Mark Jones levels from close range but the keeper responds with three fast saves before a cross bobbles off a defender and Lee Hunt slams in the winner via a post, the crossbar and a bounce on the line. 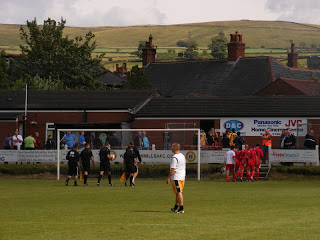