Think Istanbul and you think 2,700 years of Greeks, Byzantines and Ottomans, minarets, murder on the Orient Express, the Grand Bazaar and the Golden Horn.  And football.  With five top-flight clubs, three stadiums of 50,000 plus capacities and some of the most fanatical supporters in Europe, Turkey's biggest city is one of the continent's great weekend awaydays. 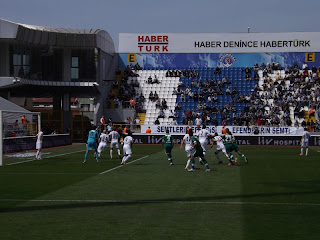 While Besiktas is the country's oldest club and Galatasaray and Fenerbahce the most consistently lauded, it's the government-backed top-flight arrivestes Kasımpaşa Spor Kulübü whose fixture catches my eye.  Fourth and fifth in the Super Lig behind Istanbul's big three, between them Kasımpaşa and Bursaspor - national champions as recently as 2009-10 - have Premier League legends like, erm, Tuncay Sanli, Andreas Isaakson, Scott Carson, Anton Ferdinand and Maurice Edu in their ranks.  That, an afternoon kick off, and the fact that I didn't have to deal with Ticketmaster's Turkish subsidiary - what could possibly go wrong? 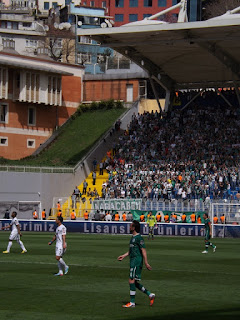 Just five minutes on foot from İstiklal Avenue, the Recep Tayyip Erdoğan Stadium is separated from the Pera Palace Hotel by one main road, a line of police and the steep bank overlooking the squat, tightly-packed quarter where the Turkish prime minister was born and raised. Erodgan played in Kasımpaşa's youth teams before transferring to politics, calls himself a "Kasımpaşa man" and regularly intervenes to help his old club in ways you can't imagine David Cameron ever quite pulling off for Aston Villa.  Now managed by former Rangers and Ajax forward Shota Arveladze, who took the job after Roy Keane turned down an earlier approach (you can only imagine what carnage his combustible personality might have wrecked on a footballing culture as volatile as Istanbul's), the newly promoted club are on the brink of their most successful season ever, having played only five seasons in Turkey's top league before 2007.  A bigger than expected crowd and my woefully misguided decision to remain on the top-deck of a Bosphorus tour boat for ninety minutes without a hat or suncream means that by the time I get to the ground there's smoke wafting everywhere, fans thronging the narrow streets and the ticket office shutters are being pulled down.  I barely have time to utter a "Bollocks!" when a voice mutters "You want ticket?" "Sorry, no English," he says, signalling the price with two fingers as he slides a complimentary ticket out of an inner pocket.  Twenty Turkish lira and some faffing around with a barcode later, I'm through the turnstiles in time to hear the opening bars of the national anthem, both sets of fans holding flags and scarves aloft as they bellow out the words. 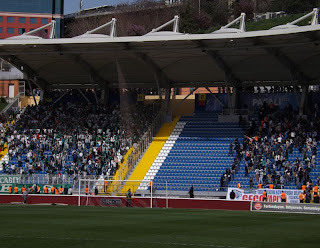 The cacophonous din is kept up throughout the whole of the first half, the two sides playing tippy-tappy in midfield while the fans behind the far goal keep up a competing barrage of noise.  With Carson not in the squad and Ferdinand left on the bench, Tuncay, Isaakson - whose final game in England saw him concede eight goals at Middlesbrough - and Kasımpaşa's German captain Fabian Ernst are the most recognisable faces in the middle. Bursa start pacier and more inventive than the home team, but struggle to find a way through, round or over Yalcin Ayhan and Baris Basdas.  It takes twenty-six minutes for the home side to mount a serious attack, a cross from the right eluding everyone but Bosnian Senijad Ibričić, who heads back across the goalkeeper and into the corner of the net.  Tuncay misses a one-on-one moments later, beating his fists on the grass in frustration, and Bursa's threat gradually begins to fade.  The second goal comes in what turns out to be the game's final minute, Kalu Uche stumbling onto a clearance after the ball takes three deflections.  The Nigerian international shows more movement in celebrating than he's previously managed all game while a home fan vaults a hoarding only to be repeatedly smacked about the head by the Bursaspor keeper, understandably irate at losing a goal to a forward so horrifically ineffective his club tried to sign Carlton Cole. As the police rush to one end of the pitch, the Kasımpaşa fans at the opposite end make a half-hearted charge towards the away supporters.  Flag poles begin flying, the home players start tearing their shirts off and somewhere in the melee the referee blows for full-time.  "Fabian Ernst's brother?" a home fan asks, swaying drunkenly and pointing to my bald, sunburnt head.  "Why?" I ask, gesturing towards the scuffle on the pitch. "Discipline!" he smiles, smashing a fist into the palm of one hand.

I bet Roy Keane would have absolutely loved him. 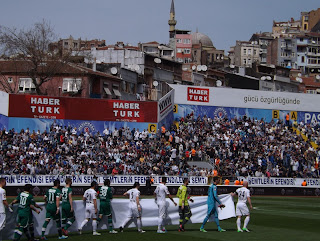 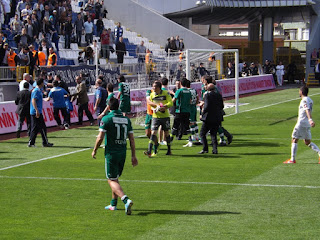 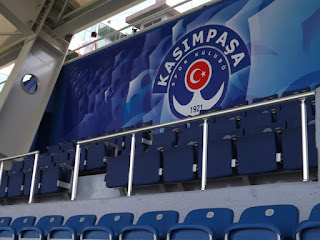